I have been thinking about the art of conversation recently, spurred on by the very real difficulties that our divided nation presents as we attempt to navigate the choppy waters of serious dilemmas and discord. And, of course, all of our racial, ethnic, and class divisions have been exposed and exacerbated by the ongoing horrors of the COVID-19 pandemic, which has lingered and exploded here in the US over the past two months. How can we talk to one another about the real pain of racism, the existence of white racism in particular, when we cannot physically see one another, or touch one another, save electronically on distancing screens? A Zoom conversation is a conversation, I suppose, but as a now semi-veteran of the experience of Zoom, I must say that it pales when compared to actual face-to-face live confrontations and interaction with human beings. I am very glad to have Zoom, as I imagine all of you are as well, but I will be glad for the day when Zoom becomes a novelty rather than a necessity.

Just why is conversation so important? By conversation, I exclude Facebook rants in response to other Facebook rants, those ubiquitous and annoying threads of fury and bombast that deface our tiny screens daily. That is not conversation; it is crowd noise, filled with bile and ignorance, sound and fury, signifying, if not nothing, then very little. I shamefully admit that I have, on one or two occasions, submitted to the desire to “set that fool straight,” and have added my own rage to the incendiary pile I have been reading. Such additions do precisely nothing to further anything like conversation. In such interactions, facts take a back seat to passion, reason is dispensed with in favor of zeal, fanaticism reigns instead of humility. We in 2020 seem to have few occasions for genuine conversation, actual give-and-take of ideas, all made nearly impossible by the microbial beast that stalks the earth.

I am struck by what passes for conversation in our time. Take the striking example of the presidential press conference. The president strides out of the White House and into the Rose Garden, facing the now socially-distanced and masked rows of reporters from all the major news outlets. The president first opens the show with a few remarks about various issues of the day; in the case of the current president those remarks may cover multiple questions over a significant period of time. After his comments end, he recognizes (or does not recognize) certain reporters who ask him questions. However, in the usual run of things at these events, the questions are too often barbed statements, accusing the president of distorting or reimagining facts and events in order to catch him out in what to them are outright lies. He immediately grows defensive, lashing out at the questioners, whether personally or with regard to their understanding of the facts they name, an understanding he clearly does not share. And so the row is on, with voices raised in anger or frustration from both sides, and the heat of the moment burns up any possible light that might have been generated by anything like a real conversation. This is in no way conversation; it is parallel play, with the various parties locked into their cubicles of disputed realities, walled off from any search for truth.

I find all of this just plain sad. What have we come to in the nation when conversation has evolved into shouting matches, when every verbal confrontation has become a cockfight, feathers flared, spurs out, blood flowing? Is there no other way we can speak one to the other? Of course there are other ways, but our public models of conversation have in the main disappeared. Our US Congress was once called the very model of a place of serious discussion about the nation’s most serious concerns, but even there we now too often find rancor and bitterness and narrow partisan divides. 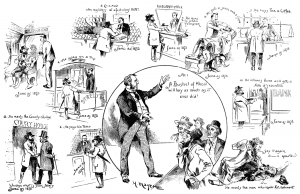 Last week, a friend here in Los Angeles reported to me that a breakfast discussion group that he has been part of for many years is now threatened to collapse, due to the perception by the founder of the group of political partisanship that has overshadowed their initial goal to discuss deep contemporary concerns out of their shared spiritual lives. All of the members shared, they thought, very similar spiritual outlooks, many having attended the same rather conservative religious institutions for their educations and gone on to significant leadership roles in similar institutions. But due to their growing rancor over the “antics of the current president” (my friend’s phrase), they find it difficult to curb that rancor long enough to continue talking to one another. I find this a microcosm of where we are now as a nation; we just cannot speak to one another across our apparently vast divides.

What to do? At this point in my essays, you expect me to head to the ancient Bible for help in the dilemma that the first section of my writing has presented, and you would be right. However, the Bible is by no means all that continuously helpful for this particular question. That is so, I think, because much of the scripture presents to us very troubled and painful conversations between God and people, and between people and people, conversations that, as in our modern case, are based in varied perceptions of reality. In the prophets of the Hebrew Bible, it is quite often a furious deity who confronts the chosen people over their refusal or inability to follow the divine commandments. For example, in Jeremiah, we read YHWH’s anger writ large against a recalcitrant Israel: “Why do you complain against me? You have all rebelled against me” (Jer.2:29)! This is hardly a model of conversation, but rather a one-sided explosion of one party against another. It in fact models too many of our modern so-called conversations, when one group imagines itself to be far superior to another, making any genuine conversation impossible. Those of us who are white, and who have had the unearned privileges of our whiteness for the 400 years of our nation’s history, have too often begun so-called conversations with our Black and Brown citizens, refusing to recognize that privilege, and thereby treating those would-be partners in dialogue as somehow less than we, somehow less deserving. As such, there can be no fruitful conversation. When we whites think we are in effect god-like, we can only dictate and demand rather than listen and learn. Yet, if we can begin to realize that we are in no sense gods on earth, conversation may begin, however tentatively, however painfully.

Perhaps some sort of model may be found in Paul’s letter to the Philippians. It should be recognized that even the great apostle was not always a model of genuine conversation; indeed, his early Galatian letter is replete with demands and recriminations against that community of churches that has refused to listen to him, he says, and have fallen under the spell of other teachers and preachers who are not in accord with Paul’s instruction. He is downright furious and fulminating as he screams in rage both against the new Galatian Christians and those who have led them astray, as Paul sees it. Read Gal.5:12 for an especially unconversational phrase! Yet, in that letter to Philippi, Paul presents that lovely and unforgettable image of having the same mind as is in Christ Jesus (Phil.2:5), and then later in the letter applies that image to the conflict between Euodia and Syntyche, a conflict that is not revealed to us, but one that has roiled the two women and by extension the Philippian community. “Be of the same mind in the Lord,” he admonishes them (Phil.4:2), suggesting that only a search to become as Jesus was, namely one who “emptied himself and humbled himself” to become obedient to God. So, too, says Paul, if we are to have community, we must also assume that mind, that way of living, one that empties itself and humbles itself toward obedience. All conversation that overcomes the stark and very real divisions that we humans create must be grounded in the mind of Christ Jesus, that humble and obedient servant of God.

Here, I think, Paul has it just right. No conversation may be held without first recognizing and accepting the necessity of humility leading to obedience to God, and fully open and empty for learning and growth with another human being. I pray that this week you will find occasions for humble and open conversation, even if it may only occur now on Zoom. If we can do that electronically, when the virus lifts its claws from us, we may perhaps face-to-face find true conversation again. 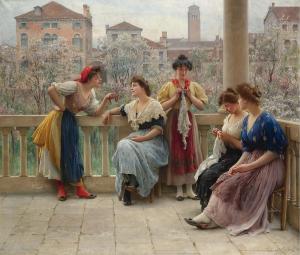 Why Bad People Will Be In Heaven
As someone who has come to accept the Biblical view of Universal...
view all Progressive Christian blogs
What Are Your Thoughts?leave a comment
Copyright 2008-2020, Patheos. All rights reserved.