The theme of the grumbling, whining Israelites continues in this short vignette from the lengthy Exodus tale. There is a very loose geographical concern as the story unfolds. In Ex.16, we are told that the “whole congregation of the Israelites” find themselves, not long after exiting Egypt, in the “wilderness of Sin, between Elim (“gods” in Hebrew) and Sinai, that famous place where they will receive the Ten Commandments from YHWH via Moses. Apparently, in Ex.17, they now depart that place and “journey by stages,” at the command of YHWH. As they move deeper into the wilderness, camped near Rephidim (from the Hebrew for “healing”), again the problem of lack of water confronts them, and in response to that desert dilemma, “the people quarreled with Moses,” demanding that he give them water (Ex.17:2). It may be of some significance that the verb used, “quarrel,” the familiar Hebrew rib varies from the earlier emphasis on their “complaints” and “grumbling” (Ex.16:2,7,8,9,12). This Hebrew verb is regularly employed in scenes of the courtroom, where it may be translated “bring a case against.” The prophets use this trope quite often when they describe YHWH’s confrontation with the recalcitrant Israelites, demanding that they answer YHWH’s charges of idolatry and injustice against them. Perhaps the most famous court scene is that found in Micah 6:1-2 where YHWH directly demands that Israel “rise and plead your case before the mountains” (sitting as the jury) in order that the “controversy” (rib) of YHWH may be heard. YHWH will “plead a case” against them, because they have rejected YHWH’s guidance, and YHWH wishes to know why.

So now the Israelites in the wilderness do something more than merely complain against God and Moses; they demand justice from them both. They claim they have been wronged in some legal sense, and insist on redress from the wrongdoers. Moses replies in some heat, “Why do you quarrel (rib) with me? Why do you test YHWH” (Ex.17:2)? The verb “test” assumes an instance of broken promises: if we are free, say the people in their case against Moses and YHWH, then why are we dying of thirst? Why would you allow our death directly after you have promised us new life? The implication is this: if you really are God, then give us water! No water, no God! God has in their eyes been found guilty of criminal negligence and is hardly worthy of their allegiance any more. But Moses wants to know why they are “testing” YHWH in this matter. Directly after the miracle at the Sea of Reeds and the huge victory over the forces of pharaoh of Egypt, is it at all reasonable to test YHWH in a little matter of water, when YHWH has already proven that water is one of YHWH’s agencies in the world?

But their thirst brings on amnesia about all that has preceded the present moment of danger, and they now return to their “complaining,” using the familiar verb from Ex.16, adding a forceful cry of anguish: “Why did you bring us out of Egypt to kill us, our children, and livestock with thirst” (Ex.17:3)? This cry is reminiscent of their earlier pain about the lack of food in the wilderness (Ex.16:3). In both instances, the people of YHWH accuse their God of having an ulterior motive against them, promising freedom, but planning death by thirst and hunger in the wilderness. Moses is quite right; the people are testing YHWH. Put up, or shut up! Are you God, or not? Or are you some random demon, anxious to kill us all in the desert? 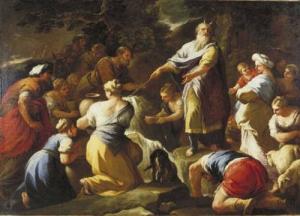 And Moses, the desperate middleman between God and people, turns in terror to that same God. “What shall I do with this people; they are about ready to stone me” (Ex.17:4)! It will not be the final time in the tale that Moses will express exasperation with his people to YHWH, but in the end he will overcome his frustrations and his full realization of their shortcomings, and will offer himself willingly for them anyway (Ex.32). But here in the wilderness, he is at his wit’s end. YHWH replies to his chosen leader with direct commands. “Pass over ahead of the people, and take with you some of the elders and the staff with which you struck the Nile, and go” (Ex.17:5). YHWH goes on and says, “I will be standing before you on the rock of Horeb (the alternative name in some traditions for Sinai). Strike the rock, and water will pour out so that the people may drink” (Ex.17:6).

Moses follows the command of YHWH to the letter, striking the sacred rock, allowing water to gush forth “in the sight of the elders.” The fact that the tale is rather more than a simple story of divine magic may be discerned from the final verse. “He (Moses) named the place Massah (“test”) and Meribah (“quarrel” or “court case”), because the Israelites quarreled and tested YHWH, ‘Is YHWH among us or not?’” (Ex.17:7). With this question, Israel asks the question we believers of every age ask: is YHWH God here or not? Is this entire church, faith, belief thing real, or is it all a sham? And how can we tell?

This text and these stinging questions are crucial at any time, but especially now in 2020 they seem insistently pertinent and uniquely difficult. The pandemic of COVID- 19 still has the world in its unyielding grip. Nearly 180,000 Americans have died, and well over 5 million have been infected with the virus. Just last Saturday, my wife and I witnessed the virtual funeral of a dear Dallas friend, a lovely caring father and grandfather, a friend to so many, who died of the virus at 61. The tributes to his life were lovely, but Walter died far too young. Here in Los Angeles we remain essentially locked down, and though cases, deaths, and hospitalizations are at last all decreasing, we have many months still to live with the pain and uncertainty that the virus brings.

And then we are faced with a deep racial divide in the country. Again this week, still another Black man and father was shot by a policeman, and remains in the hospital, alive but paralyzed from the waist down. Whether he will walk again is uncertain, but demonstrations have turned violent against the actions of the police, and once again our TV screens are filled with the anguish of a wife and mother, along with burning property and furious supporters of their fallen fellow citizen. The previous week, the Democrats held their virtual convention to nominate Joe Biden for president and Kamala Harris for Vice-President. During that four-day event, many speakers decried the near-continuous violence against people of color at the hands of the police of the country, and urged all of us, especially those of us who are white, to face our racism and to do whatever we can to bring all Americans together, deep cries not heard with such force since the civil rights movement of the 1960’s. This week it is the Republican’s convention to nominate Donald Trump and Mike Pence for another four-year term. However, in this convention, there has been little talk of racial harmony, but a good deal of talk about riots and dangers and law and order. The contrast has been stark and frankly terrifying. Whatever party you support, and I have made it clear over and again where my vote will go, such racialized language of property values and crumbling neighborhoods and looting and law-breaking will never lead the nation toward even a tenuous move toward equality.

And so, again we need to ask: Is God among us or not? If so, how could we tell? And if not, then we are on our own in very trying days. Like the ancient Israelites, I crave evidence, proof that God is around and active. Gushing water from a stone would be welcome! But because I am a rational, scientific, non-magical human being, I do not expect to be drenched by unexpected water any time soon—in fact, never. However, as a person of faith, I do expect to be challenged by God to be better than I could be on my own. Instead of hunkering down behind my privileged whiteness, I know that the God of all people urges me to open my white head up wider in order to face my racism squarely and to act in new and uncomfortable ways to do something about it. Also, that God demands that I wear a mask in public, to keep a safe distance from my colleagues, and to avoid crowds of any size that would jeopardize their health and mine. Those who announce that the American Constitutional First Amendment gives them the individual right to deny these simple demands neither know the full meaning of the Constitution nor are conversant with the God many of them say they follow. I believe completely that God is indeed among us, luring us to a better racial society, urging us to mask up and beat back the scourges of COVID-19. God is among us, and because that is true, we have hope for a safer, more healthy, more equal world, but we cannot wait for Moses to strike the rock to release magic water; we must be the ones who strike that rock of health and racial equality to release life-giving water, and with the help of our God, may we do so! 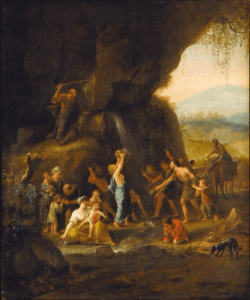