The Peripatetic Preacher What’s in a Name?

This week, the presumptive presidential candidate for the Democratic Party, Joe Biden, chose as his vice-presidential running mate, Kamala Harris, the Junior Senator from California. This is an historic choice in several ways. Senator Harris is bi-racial, though she does identify as Black. In addition, she is the daughter of an Indian mother and Jamaican father, so not only is she the first Black person to run for the Vice- Presidency, she is also the first Indian person as well. She was born in Oakland, CA, was bused to schools in Berkeley, moved at age 12 with her mother to Montreal, Canada, attending a French-speaking school there, and finally went to college at Howard University, an historically Black college, and Harris Law School in California, becoming the first Black woman in every position she has held, from a City Attorney, to State’s Attorney General, to one of California’s national Senators. To add to her diverse profile, she has been married to a white Jewish man, who is also a lawyer, Douglas Emhoff, since 2014, and is the step- mother to his two sons from a previous marriage. Oh, and she is a member of an American Baptist church in San Francisco, but growing up she also attended a local Hindu Temple. To see Kamala Harris is in some ways to see the America of 2020, a very successful woman, a child of immigration, a person of great diversity who has worked hard to achieve a large portion of what we have long called the American dream.

It did not take long for the Republican and conservative parts of the country to begin attacks on her, her character, her public record, and even, quite absurdly but familiarly, her birth status as a citizen of the country. She really was born in Oakland, and because that is true, a Supreme Court ruling of 1898 makes her a citizen of the USA, despite the status of her parents’ citizenship, though there is little doubt on that score either. On the Tucker Carlson show on the FOX News network this week, he repeatedly mispronounced her first name, at first out of ignorance, but then repeatedly out of some sort of spite, though he was given a pronunciation lesson from the guest he had asked to be on his show. After several attempts to say her name, and after several corrections, Carlson finally said, “So what? Are we not allowed to criticize her because we cannot say her name?” Now Mr. Carlson has long been known as an attack dog journalist, little more than a shill for President Trump, so it was not surprising to hear him act as he usually does when confronting those he cannot abide, namely like a third grader on the playground. Allow me to answer his question about criticizing Senator Harris without pronouncing her name correctly. The answer is a flat No, Mr. Carlson. If you claim to be a serious journalist, in spite of all evidence to the contrary, you are duty bound, yea required, to name those in the news correctly. Imagine, if you can, if someone called you Tooker Carlstadt, or some other bastardization of your given name; would you not immediately demand a restart on your conversation with the fool that could not get your vowels and consonants around her teeth and tongue? 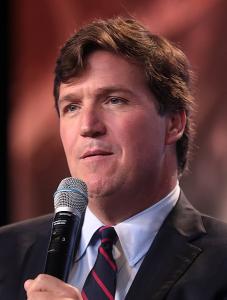 A person’s name is beyond doubt a very important matter. A name is the initial defining thing we know and learn about one another, and when we call up a person’s name, we in effect call up the bearer of the name, no matter how common or unusual that name may be. Kamala is a Sanskrit name, taken from the language of the sacred Hindu texts. One of its central meanings is “Lotus” or Lotus Flower,” and in certain texts it is the name of a divine figure. It is a name of supreme beauty, and is well known in India. Its pronunciation is “comma-la,” and anyone, even Mr. Carlson, could learn to say it correctly, if his goal in mangling her name was not an obvious attempt at disrespect.

Senator Harris’s middle name is Devi, another borrowing from Hindu culture. Devi is a name given to a married woman, placed after her given name, hence Kamala Devi Harris. Another representation of Devi in Hindu mythology is Annapurna, a divine consort of Shiva; Annapurna is also the name of one of the tallest mountains in the Himalayas, a formidable 29,000’+ peak, shorter in height only to the far more famous Mt. Everest. Thus, it could be said that Senator Harris’s names present a delightful contrast between a lovely flower and a massive mountain, a combination to be reckoned with. Mr. Carlson should learn of this combination before next disrespecting her name.

My wife’s name is Diana. It is a name that is apparently not quite as ubiquitous as the name Diane (or Dianne). She loves her name and wears it with great pride. When she was growing up in a small Kansas town, her doctor father, when answering the phone and being asked if the caller could speak with Diane, would reply brusquely, “No one by that name lives here,” and hang up. Diane is plainly not Diana, however close the names’ sounds may be. We named our first child Darius now 46 years ago, which in 1974 was not a common name at all. When we told my parents that if the child were male, we planned to give him that unusual name; my mother began to pray mightily for a girl! This was well before the days when a child’s sex could be easily identified by technology well before the birth, so when we finally discovered that he was a boy on his birth day, my call to my mother led to several long silences as the name Darius was allowed to sink in. After all, my name is John, and my three brothers are Bob, Larry, and Gary, hardly strange names at all. But after all these years of our son’s life, he is without doubt Darius, and no other, a name he also prizes, despite some early mangling of its pronunciation. Names are more than simple designations; they identify and call up the person who bears the name.

The Bible may well be the source of the significance of names, at least in the western world, as influenced by it. In the book of Genesis, names are extremely important, designating not only certain people, but also certain attributes of those people.‘adam is the Hebrew generic name for “humanity,” while Eve (Chawah) relates to the word for “life” or “living.” Cain means “spear,” while Abel means “breath” or “wind,” names that suggest just who will be murderer and victim in that terrible tale. Noah means “rest” or “consolation,” though it is a name filled with irony as the world’s first sailor is in the end neither rest nor consolation for the world or his family. Abram, and its dialectical equivalent Abraham, means “mighty father” or “father of many,” while his wife, Sarai or Sarah means “princess.” Isaac is Hebrew for “laughter,” a delightful designation for one born to a 90-year-old mother. Jacob means “to grab or take,” and no boy was better named, since he spends his life grabbing and taking as much as he can. Joseph means “increase,” something his wily ways ultimately does for his family and his Egyptian colleagues, though the increase is as much for his arrogant self as it is for others.

Surely, the most famous Christian biblical name is Jesus, which is based on the Hebrew for “salvation” or “rescue,” as are the names Joshua, Hosea, and Isaiah. Solomon means “his peace,” but his life ends with little peace as his poor economic and social policies in the 10th century BCE lead to a division of the kingdom of Israel north and south. Jonah means “dove,” but though that bird is regularly lauded in the ancient tradition, the prophet Jonah is anything but a laudable figure. In the New Testament Peter may be Greek for “rock,” but a rock he plainly does not prove to be at the end of his life with Jesus. In the Bible names are significant, nearly always, so the answer to the question, “What’s in a name?” is a great deal indeed.

So, Mr. Carlson, you would do well to learn to pronounce Senator Harris’s first name correctly, not only because it deserves correct pronunciation as do all names of America’s citizens and leaders, along with the names of all the world’s inhabitants, but also because she may well become the next Vice-President of our country, and her name will necessarily fall often from your lips, as little as that prospect may delight you.

August 13, 2020
The Peripatetic Preacher The Bible: Recognizing and Choosing Your Lenses (4)
Next Post