The towering figure in the Hebrew Bible is without doubt Moses. He is deliverer of the people from Egypt; he is giver of the Torah at the sacred mountain; he is mediator between YHWH and the fearful and recalcitrant people; he is interpreter of the given Torah. In all these ways Moses is unmatched in the story of Israel, the crucial prophet in the long tale of Israelite bondage, freedom, evil, and final entry into the land of promise. In the book of Deuteronomy, all of these various facets of the character and activity of Moses come to the fore. And the unique story of his death and burial sum up who he was and how he must be remembered in the hearts of his followers.

I suppose if one were to ask a typical lover of the Bible to tell the story of Moses, she would be begin with his miraculous saving in the Nile River by the unlikely hand of the daughter of pharaoh, his murder of an Egyptian overseer, his escape into Midian, his unforgettable call at the burning bush, his institution of the ten plagues that bring about the release of Israel from slavery, his subsequent power over the sea, bringing about the safe passage of his people and the death of the armies of Egypt, his securing from the hand of YHWH the Ten Commandments at the sacred mountain, and his long-suffering sojourn as leader of the grumbling people in the wilderness of Sinai, on their way to YHWH’s land of promise. Note that the primary factor of the bulk of these incidents is miracle, the actions of divinity making the story happen as it does. Surprisingly enough, these memorable and miraculous events of the Moses story are precisely not what the Book of Deuteronomy emphasizes as it recounts the tale once again. Moses is not there primarily described as a worker of miracles, though in our chapter for today that element of his life is mentioned (Deut.34:11-12). But the fact that he dies outside of the promised land, after being allowed only to view it from Moab, and is buried in an unmarked and unknown grave, suggests that the real purpose of his life lies elsewhere than any miraculous power. In the main, Moses is both giver of Torah and interpreter of Torah, and most important of all, he promises that other prophets like him will appear in the community of the people, whose basic task will be to interpret Torah as time and changing circumstances dictate. In addition, Moses, and all the prophets like him who will follow, will serve as mediators between God and people.

A closer look at several passages from Deuteronomy makes the point. Once the structure of Deuteronomy is grasped, it may readily be seen that surrounding the gift of the ten words from YHWH on Sinai are two reminders that Moses has played the role of mediator between Israel and YHWH. At Deut.5:5, the prophet reminds the people that they were fearful of the mountain’s fire and God’s thundering voice, and begged Moses to go up and talk to God and bring them report of what God said. Then after the ten words are reiterated (Deut.5:6-21), Moses again recalls that it was he who spoke with YHWH, because Israel was terrified of the fire and the voice (Deut.5:24-27). Thus, Moses is first mediator, and then in the succeeding chapters, he becomes interpreter of the Sinai Torah. The remainder of Deuteronomy is in the main a series of homilies by Moses. In Deut.6-11 he spells out for Israel the meaning and implications of the commandment found at 6:4-5, the famous “Hear, O Israel” statement that becomes the basic creed of subsequent Israelite and Jewish belief. And then in Deut.12-26, Moses exhorts them to understand and follow the rich implications of the “statutes and ordinances,” given to them from Sinai that will serve them as basic rules for belief and practice. In Deut.4-30, no fewer than 36 times Moses states “I command you;” in effect the interpretations, rooted in Torah, become more than the Torah of YHWH, but just as surely the Torah of Moses.

Yet, Moses is not merely being didactic, imparting to the people what the Torah means and how it is to work. His sermons do far more than teach; they attempt to elicit obedience from them. That is why he says so often “that it may go well with you” or “that you may prolong your days in the land.” These tag lines are not simply promises of certain success if the Torah is strictly followed, though many readers have heard them like that, especially the false prophets of a “prosperity gospel” in our own time. Deuteronomy is hardly so foolish as to suggest that doing certain actions or believing certain things will lead inevitably to roaring success; the writers know all too well of the inevitable failures of human attempts to follow the ways of YHWH and Moses. Still, one’s life is more likely to “go well” and one’s life is more likely to be “prolonged” if the commandments, statutes, and ordinances of YHWH are taken with deep seriousness.

In the sermons of Moses, he makes it clear that if these teachings are to remain viable among the people, two things must occur. The first is that they must always be taught to the children of the community, lest they are forgotten all too soon by the current generation (Deut.6:6-9). And the second factor of viability is the promise that Moses is hardly the last prophet of his kind that will appear in the community of Israel. At Deut.18:15, Moses promises that “YHWH will raise up for you a prophet like me; him you shall pay attention to.” The gift of Torah is hardly a one-time event; every generation will witness a prophet who will interpret Torah for his or her generation. The subsequent rabbinic tradition finds its origins in this Mosaic promise, as men and now women are raised up by YHWH to continue Moses’s work of interpretation.

But the central role of interpretation is qualified by the equally important role of the prophet as mediator, even as suffering mediator for the people. The extraordinary tale of Moses recounted at Exodus 32:11-14, where the lawgiver stands in the teeth of the fury of YHWH, a YHWH enraged by the monstrous molten calf at the very base of the mountain, and mediates on behalf of Israel, saving them from the wrath of YHWH, is the basis for this idea of Moses as suffering mediator. At Deut.9:25-29, Moses tells the people how he “lay prostrate before YHWH when YHWH intended to destroy you,” praying for YHWH’s forgiveness. As a result of this abject mediation, YHWH determines that Moses will not be allowed to enter the land of promise, saying to him “you shall not go there” (Deut.1:37). And though Moses begs his God to allow him entrance into that land (Deut.3:25), YHWH curtly answers, “Speak no more to me of this thing” (Deut.3:26)!

All of this serves as context for the peculiar death of the prophet. Because Moses has vicariously assumed YHWH’s wrath (see the older story at Exodus 32:31-32), his solitary death in Moab takes on the same character. YHWH buries him, “and no one knows the place of his burial to this day” (Deut.34:6). Pilgrims will find no sacred monument to the great Moses, a place of ongoing ceremony for the memory of the prophet. His role must be to live in the hearts of the people as the greatest of all prophets, the prophet by whom all subsequent prophets must be judged. Like Moses, would-be followers of YHWH must be more than lawgivers, more than interpreters of Torah, but also and centrally suffering mediators for a sinful and stumbling people. Those who cannot love their people enough to give their lives for them, cannot serve as interpreters of Torah for them. Moses, the suffering mediator, is model for all who would be followers of this God. 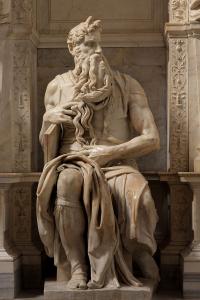 September 23, 2020
The Peripatetic Preacher When Hebrew Lives Mattered
Next Post

A Straight Christian Mom's Response to...
FreedHearts
Related posts from The Peripatetic Preacher