Most of the celebrations of All Saints Day that I have encountered or led have included solemn ways to remember those members of a community who have died in the previous year. A name is read and a chime or bell is rung, sounding in the deep silence of the sanctuary. Of course, in this year of the pandemic, that is little likely to happen; I imagine there will be a Zoom service at which the pastor will read the names of the deceased in virtual space, and those on the Zoom call will be led to recall their fellow congregants now physically separated from them, just as they find themselves physically separated from their living members. I can envision this as an equally solemn moment to those past sanctuary events, albeit a very different one.

If the preacher chooses the Hebrew Bible passage of the day as basis for her sermon, she will confront another sort of All Saints experience. As the book of Joshua has it, when Israel crosses the Jordan River and enters the Promised Land of YHWH, the author records the event in deeply liturgical colors. And that liturgy, just like our modern All Saints liturgies, recalls past experiences and rich memories of forebears who have gone before us. When the priests of Israel, carrying the Ark of the Covenant, place their feet in the Jordan, “the waters of the Jordan flowing from above shall be cut off; they shall stand in a single heap” (Josh.3:13). Though the text goes on to suggest a possible geographical location for this miraculous event (Josh.3:16), it is hardly the main point of the text to pinpoint where it happened, namely “at Adam, a city beside Zarethan, the waters flowing toward the sea of the Arabah, the Salt Sea” (the famous Dead Sea, we assume). Historians and archaeologists have spent much time surmising where these spots may be, and have suggested that such stoppages of the Jordan have in fact occurred due to massive mudslides over the years. Still, we are not meant to search the Jordan River Valley for the locations in order to memorialize them as scenes of divine activity. The author rather invigorates our liturgical and theological memories instead, so that we never forget what YHWH has been about from the creation of the world.

“Waters piled up in a heap” recalls one of the accounts of the victory at the Sea of Reeds as a tide of water is pushed back, allowing the dry land of safety and freedom to appear, permitting the Israelites to walk through the sea on that dry land, escaping their Egyptian pursuers, who are subsequently drowned in the sea when the heap of water “returns to its normal flow” (Ex.14:27-28). The more famous “walls of water,” the usual story we remember, based on the ubiquitous movie, “The Ten Commandments,” is not recalled here in Joshua. Though the Jordan event is no less miraculous than the tide of the Sea of Reeds, it does seem to be rooted in more common memories of the work of tides and floods. Still, when the waters pile up, they are clear echoes of the work of Moses’s staff, forcing the waters of the Sea of Reeds to move aside “in order that the dry land could appear.”

And that language of the appearance of dry land as a result of the movement of water is itself reminiscent of a far older memory of a similar divine activity. In the first account of the creation of the world, perhaps not written down until the Babylonian exile of Israel in the 6th century BCE, but surely reflecting far older traditions, the theme of the movement of waters by God is established in the first chapter of the Bible. “And Elohim said, ‘Let the waters under the sky be gathered together into one place, and let the dry land appear” (Gen.1:9). Here again the waters are manipulated by God, allowing the dry land to appear, making it possible for the land creatures, including the human beings, to have a solid place on which to stand, a fixed location for their continued survival. This theme of water movement, leading to dry land, is ubiquitous in the tradition, repeated at the Sea of Reeds, the crossing of the Jordan, and recalled in the work of the prophets (see Is.43, for example). 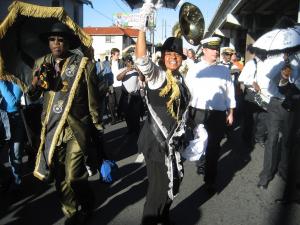 Not only the movement of water and the appearance of dry land remind us of the work of YHWH for Israel. There is also the command YHWH gives to Joshua, the successor of Moses, that he is to say to the priests bearing the Ark, “When you come to the bank of the waters of the Jordan, you shall stand still in the Jordan” (Josh.3:8). Here again is an echo of one of the earlier stories. When Moses is confronted by the terrified Israelites, witnessing the onrushing Egyptian chariots while standing on the banks of the roiling Sea of Reeds, he tells them, “Do not be afraid, stand firm (or “still”), and see the deliverance that YHWH will accomplish for you today” (Ex.14:13). Though the Israelites at the Jordan are not faced with an immediate dangerous enemy, they are entering a land already occupied by numerous tribes of unknown people. YHWH has promised to drive all of them out before them, yet the vivid memory of the event at the Sea of Reeds must surely give them pause, and must have provided for the author of Joshua another clear memory of the fear of that event, recapitulated now at the Jordan.

Hence, this tale at the Jordan River recalls at least two earlier crucial events in the theological history of Israel—the creation of the world and the victory over the Egyptians at the Sea of Reeds, two determinative pieces of divine action that set the tone for the work of God on behalf of the people. When Israel passes over the Jordan, they are to remember those who passed through the waters of the Sea of Reeds, and also to remember the work of the God who made all of this possible at the beginning of the creation of the world. Not only must we recall those of our community who have died, but we also are called to remember those ancient Israelite forebears in the faith who crossed the Jordan and traversed the dry ground of the Sea. And, as in every All Saints event, we must remember the central work of the God who makes all things possible, who creates the world, works on behalf of those who would be in God’s community, and remains with us, even though we “pass through the waters, and walk through the rivers, …for I am YHWH, your God” (Is.43:2-3). 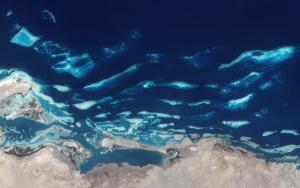 The Second Day of Advent
New Life in Christ Consider yourselves dead to sin and alive in...
view all Progressive Christian blogs
What Are Your Thoughts?leave a comment
Copyright 2008-2020, Patheos. All rights reserved.