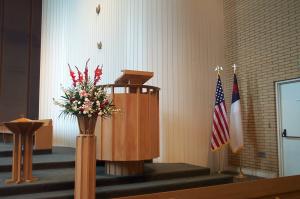 I imagine that the title of this essay may be familiar to many of you. It was found on the belt buckles of German soldiers, especially during World War II. It translates: “God with us,” and implies that God is uniquely and exclusively watching over the soldiers of Germany, suggesting that the cause for which they were fighting was somehow blessed by the deity. This claim, of course, was particularly problematic during World War II, since Germany was fighting for what is now recognized universally as one of history’s most evil and reviled regimes, a Germany boasting itself as the Third Reich. That monstrous regime murdered untold millions of Jews, disabled people, gypsies, LGBTQ+ persons, along with countless Slavs and Russians. It can only be concluded that to suggest that “God is with them” was the height of religious hypocrisy and horror.

The fact is that the connection of “Gott mit Uns” and military might began over 300 years prior to the Second World War, when the seemingly unbeatable Swedish army, led by the redoubtable Gustavus Adolphus, invaded Northern Europe during the Thirty Years War, winning a significant battle at Breitenfeld over the Hapsburg monarchy in 1631. Adolphus himself died the very next year, but that connection between God and certain warriors to the exclusion of others, was cemented in history’s lore for the next 400 years.

Well, that last sentence is hardly the full truth of the historical matter, since in the Bible we find clear references to the ancient fusion of God and the chosen ones over against “our enemies.” It is important that we examine and admit that fusion, because in our own time the overt expressions of what can be called “Christian Nationalism” has become once again publically prominent. Our Bible reveals what can easily be called “Israelite Nationalism” in numerous places, from the battle texts in the Book of Joshua to the implied and rejected nationalism questioned in the prophets (see, e.g. Amos 3:2 among other passages) to the imprecatory Psalms of the Psalter. Let’s focus attention on one of the many psalms that might be chosen as a prominent example of Israelite Nationalism.

Ps.59 is a poem that exalts Israel at the expense of an unnamed series of enemies. “Deliver me from my enemies, O my God; protect me from those who rise against me! Deliver me from those who work evil; save me from the bloodthirsty” (Ps.59:1-2). The poem begins with what sounds like a very general call to God for help, but soon devolves into a direct demand that God, the God of Israel, obliterate those who threaten the nation. “Rouse yourself, come to my help and observe! You, YHWH God of the armies, are God of Israel. Awake to punish all the nations; spare none of those who treacherously plot evil” (Ps.59:4-5)! The traditional translation “God of Hosts” disguises the true meaning of the phrase; God is believed to be a commander of armies, and as such is asked to enter the battle against any who dare threaten the chosen people. “Each evening they return, howling like dogs and prowling around the city. They lurk around for food, growling if they are not satisfied” (Ps.59:14-15). “But you laugh at them, YHWH; you hold all the nations in derision” (Ps.59:8)! Here is Israelite nationalism with a vengeance!

There was a recent sociological study, attempting to understand the continual and seemingly unchanging support for the presidency of Donald Trump from certain groups in our culture. Many reasons have been suggested for this support, but this current analysis has determined that the power of “Christian Nationalism” lies at the base of that support. This study, led by Samuel Perry of the University of Oklahoma, took much of its supportive data from a testing instrument called The Public and Discourse Ethics Survey. In that survey, the notion of Christian Nationalism came up again and again as crucial for understanding not only Trump’s unwavering support but also appeared to lie at the root of the deep divisions to be found in the country, particularly divisions tied to religion.

Perry defines Christian Nationalism as follows: “an ideology that idealizes and advocates a fusion of American civic life with a particular type of Christian identity and culture.” There is, of course, nothing especially new about this observation that a kind of American patriotism, fused with national exceptionalism, has wormed its way into the religious practice and belief of a significant number of American Christians. One can go a long way in the US to find sanctuaries that do NOT have an American flag prominently on display. I preached a sermon the Sunday after 9/11 in a large church in the Dallas area, and after the first service at 8:30, I returned for the 11:00 service and found that someone had moved the American flag to stand a few feet from the pulpit. This action, I assume, was a statement that all who came to worship that day were in effect worshipping the nation as much or more that they had come to worship the God of all nations. I found that flag chilling, as I preached my sermon that day.

Perry concludes that Christian Nationalism has several important effects on its adherents. First, when it comes to authority: Donald Trump was the landslide winner, followed by some unnamed “religious organizations,” and thirdly by the Republican party. Second, Christian Nationalists also have an “affinity for xenophobic and racist arguments.” For example, they have no problem with calling COVID-19, the “China virus,” even though its huge early spread in New York City had nothing to do with China, but came first through European travellers. Third, immigrants are dangerous and a drain on “American” culture. Fourth, minorities are not to be pitied for their high COVID infections rates, but are rather to be feared and reviled for those rates. In the survey, these self-proclaimed Christian Nationalists had no wish to prioritize the most vulnerable among us when they were asked to practice social distancing restrictions to help stop the virus’ spread. For them, it all comes down to the question: who is worthy? Who deserves national protection? The answer was: “White Christians.”

America, just like ancient Israel before it, has a serious problem with confusing the care and love of God being limited to those who look and think like some imagined model of normalcy, that is a model of white Christians very narrowly defined, or in parts of the Bible the chosen people of God, defined only as Israelites who worship and think alike. Fortunately, in both biblical testaments, the struggle to expand the belief in the love of God to include all nations and all peoples and all earth’s creatures was ongoing, led by certain psalms (see Ps.139, for example), the prophets whose vision encompassed a much larger perception of the God of all creation, the later wisdom literature that spoke of God in far more expansive ways, and the story of Jesus, whose life and ministry implied the universality of God’s love for all. It could readily be said that Christian Nationalism is in fact an oxymoron. If one is genuinely Christian, one is necessarily concerned with all nations, not merely one’s own. Such a belief is demonstrated, according to the work of Samuel Perry in an interesting way. “It seems like in just about every study we do, once we account for Christian Nationalism, it actually makes religious commitment jump in the opposite direction. In other words, (religious people) tend to look like pretty good neighbors.” Once the eyes of genuinely religious people are raised beyond the walls of their own nation, beyond the bounds of their own specific group of people, they tend to spread their care and concern very broadly to all the peoples and creatures of God. It turns out that so-called Christian Nationalists are hardly truly Christian at all. 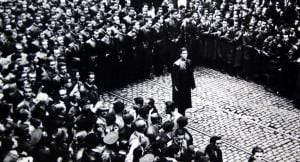