[Beginning Note: If you would like a more detailed analysis of this passage, please see my 2013 book, Telling the Whole Story, chapter 6, 169-198. It may be far more than you ever want, but I thought I would let you know.]

I have long been fascinated by the dual presentation of the grim and dramatic story of the prophet Deborah, her companion agent of doom, Jael, and the two hapless men of the tale, Sisera and Barak, two would-be generals who more resemble feeble buck privates than grand military leaders. Judges 5 offers the reader a rich poetic portrayal of the events of the supposed struggle between the forces of Israel and the ranks of the Canaanites, set presumably sometime in the 11th century BCE. Judges 4 presents the same story, albeit with several different twists. The basic outline of the two accounts is the same.

Deborah, a female prophet of YHWH, a rather surprising picture in ancient Israel, yet stated without comment, calls the forces of Israel to battle with the vast army of Jabin, called “king of Canaan,” though such a thing certainly never existed historically. His general was Sisera, and the general of the Israelite force was Barak, a Hebrew word perhaps derived from the word meaning “blessed.” Unfortunately, blessed he apparently was not, since he refused to go to the battle unless Deborah herself went with him. She does go, and directs Barak in the tactics for the battle. Israel wins a great victory over the army of Jabin, while Sisera, in a decidedly cowardly fashion, runs headlong from the battle, leaving his vaunted army to be annihilated. In terror, he runs to the camp of Heber, the Kenite, a worker of metal who has a peace treaty with Jabin. As such, Sisera expects then a safe Middle Eastern welcome from Heber. Instead, Heber’s wife Jael (meaning “YHWH is God”) greets the fearful general with a jar of warm milk, and then nails his sleeping head to the floor of her tent with a handy tent peg. Pursuing Sisera, seeking the glory of the victory, Barak rushes to Jael’s tent, only to find his enemy lying in a pool of his own blood, dead by the hand of a woman. Just as Deborah had warned Barak before the battle, “YHWH will give glory to the hand of a woman,” her prediction has come all too true, as Jael’s hand has literally felled the general and gained thereby glory for herself. Barak is quite clearly too little, too late. Though the poetic chapter 5 adds delicious and stunning poetic pleasures to the story, its outline mirrors that of the prose story of chapter 4. It is universally believed that Judges 5 is among the very oldest portions of the Hebrew Bible, while chapter 4 is later, based on its poetic predecessor.

Why tell this grisly tale twice? The ancient poetic account is quite simply grand in its presentation, offering to the reader surprising insights into the multiple facets of warfare. There is found early in the poem the marshal pageantry and power of war, as the forces of Israel march out and gain a huge victory over the Canaanites. Then there is the treachery of war, as Jael lures Sisera to his death, despite the peace treaty that supposedly guarantees safety for the signatories to the treaty; of course, the wars of any age tend regularly to trample on the niceties of treaties. Lastly, the poem presents the tragic and unforgettable portrait of Sisera’s mother, anxiously awaiting the return of her son, expecting his great victory and his load of rich plunder from the defeated Israelites. We know all too well that Sisera will never return to his mother, his private slaughter by the clever Jael having snatched him monstrously and forever from the world of the living. Thus do all wars end with grieving and bereft mothers and fathers, keening for their lost children. Still, I suggest that the prose account of chapter 4 has rather different fish to fry.

It announces its intentions in the fourth verse of the tale after the typical Judges outlined “history” of Israel’s sin, YHWH’s fury at them and their subjection to an enemy at YHWH’s instigation, and their subsequent cries to YHWH for help. Vs.4 announces YHWH’s choice for savior for the people, and this time it is a woman, but the story does not merely give us the name of the woman, Deborah, but adds a feminine flourish by saying she is “female prophet” as well as being the wife of Lappidoth, a man who is never mentioned again, but whose name has an obvious feminine plural ending! We have entered a world of powerful women, and the author wants us to not to miss that fact. The reader may be sure that it is the women of the story who will matter, while the men may not here play their usual roles as heroes and masters. While the Bible has long been recognized as replete with male dominance and female subservience, that will not be the case in this tale.

And so the story unfolds. Deborah is in addition to her role as YHWH’s prophet an attorney of some sort, setting up her practice under the “palm of Deborah,” awaiting “the children of Israel” to attend her singular court for “judgment.” Just as Moses tended court in Median for the Israelite escapees from Egypt at Exodus 18, so now does Deborah play the same role. Her very name may be derived from Hebrew feminine for “speaking” or “word,” though it does also come to mean “bee” rather rarely in the Bible. Taking on the role of prophet, (Jud.4:6), she summons Barak and commands him, through the mouth of YHWH, “Move! Gather at Mt. Tabor, and take with you 10,000 men from Naphtali and Zebulon. And I will gather to you at the stream Kishon Sisera, the leader of the army of Jabin, along with his chariots and troops, and I will give him into your hand” (Jud.4:6-7). The command is crystal clear; assemble the troops, go to Mt. Tabor, and you will win a great victory over Sisera and the army of Jabin.

Shockingly, the general is reluctant, despite the call of his God through the prophet, and says rather meekly, “If you will go with me, then I will go, but if you will not go with me, then I will not go” (Jud.4:8). Immediately, the prophet replies, “There will be no glory for you on the road you are going, because into the hand of a woman YHWH will sell Sisera” (Jud.4:9). Barak has been warned; his hesitation to follow YHWH’s command will now cost him the victory and the glory, because as the writer noted the story is about women, not men.

The ensuing battle is peculiar in its detail. At vs.14 Deborah reiterates YHWH’s command to Barak, “Arise, because this is the day in which YHWH will give Sisera into your hand! Does not YHWH go forth before you?” This repeated command is odd for two reasons; in vs.9 Deborah has already warned Barak that a woman will receive the glory, and that YHWH will NOT give Sisera into his hand. Now she says YHWH will do that after all, but she adds that YHWH will “go forth before you.” The meaning of “before” is interesting. It might mean that YHWH is leading Barak and Israel in battle, a typical formulation, but it might also mean that YHWH will get to the battle well before Barak arrives. And so it proves to be, as vs.15 appears to imply: “And YHWH routed Sisera and all his chariots and all the army at the edge of the sword BEFORE Barak.” That is to say that before Barak can join the fight, YHWH has already defeated Sisera root and branch. The use of the word “rout” recalls four other instances in the Hebrew Bible where YHWH stands alone in victory: at the Sea of Reeds at Ex.14:24 YHWH “looked down on the army of the Egyptians and routed the army;” at Ex.23:27 YHWH promises that the peoples currently dwelling in the land of promise will be “blotted out” before them because YHWH will “rout” them; at Josh.10:10 YHWH routs the Gibeonites after the sun is made to stand still in the sky; and at I Sam.7:10 the Philistines are thwarted in their attempt to attack the worshipping Israelites because YHWH “routed” them. Here in Judges 4, it appears that Barak has no army to fight, because YHWH has already routed them. Thus, as Barak pursues the fleeing chariots back to their home city in vs.16, he is perhaps pursuing empty chariots and a city bereft of people. There will be no glory for Barak! 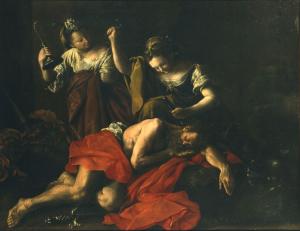 The cowardly Sisera heads in terror to the tent of Heber and finds ignominious and horrifying death at the hands of a woman. To be murdered by a woman was a terrible thing for a man in the ancient world. At Jud.9:54, the cruel would-be king Abimelech is crushed by a huge millstone, hurled from the city tower by an enraged woman, but just before he dies he demands that his armor bearer kill him lest it is said after his death that a woman did him in. There can be no question in this tale that a woman did indeed murder the enemy general. Barak then rushes to the tent of Jael, but too late. He will get no glory here. The heroes are indeed Deborah and Jael; Sisera and Barak are two failed men.

I cannot resist sharing a limerick that I have taken the liberty to change a bit to summarize my reading of this extraordinary female-centered story. The author D.R Benson in his delightful 1986 Biblical Limericks provided his poem by way of summary, but I add my own twist to suggest the way this story focuses squarely on the power of women.

There was a young lady named Jael,

Who drew courage, not being a male,

From deep in her viscera,

With terminal migraine by nail.

Even from the predominantly male-dominated Hebrew Bible comes this amazing female- dominated story. Things really are seldom what they seem! 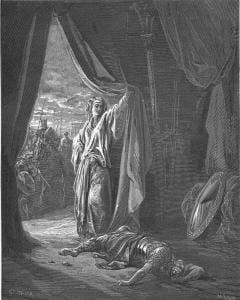