The Peripatetic Preacher Individualism is Killing Us

I have made no secret of the fact that I was delighted by the outcome of the presidential election. The 2016 election of Donald Trump was nothing less than a catastrophe for US America, and though I had hoped that Trump would somehow “grow into the job,” it became all too clear that growth in this man was frankly an impossibility. He ridiculed his “enemies,” maligned many of our overseas friends, embraced terrible strong men around the world, refused to listen to experts, scientific or military or ethical, cracked ridiculous on Twitter, did not read much of anything related to his job as president, and played a huge amount of golf, badly by most accounts, cheating regularly along the way. In short, he was even worse than advertised, and our nation lost immeasurably in the court of international opinion. After four years of Trump’s chaos, US America may be at its weakest and most distrusted position since before the turn of the 20th century. This is demonstrably true despite the continuous claims by the president and his ever-changing class of sycophants, that our nation is “as strong as it has ever been.” This is false on so many fronts, that I have no time in this brief essay to demonstrate the fact.

In this brief piece, I want to emphasize a simple and terrible fact about US America, one that has long been pointed out, but one that has not been discussed nearly enough. I do not want to imply at all that Donald Trump created this fact about us, but he surely exacerbated it during his appalling time as president. We are a nation of stark and unyielding individualism. We refuse to be told what we must do for our country, because we only want to act on behalf of ourselves. There are perhaps a few outstanding exceptions: members of our first responders, military volunteers, nurses, doctors, police, firefighters, among others, but the tragic reality is that the rest of us are in the main out for ourselves. How else can we explain the recent horrifying spike in COVID-19 infections and deaths, particularly in states and localities that simply will not wear masks and social distance, based on the monstrous claim that “I will not be told what to do?” Absurd notions of “1st Amendment rights” are tossed around like beach balls, on socially undistant beaches, as a camouflage for a singular and steadfast refusal to be told what to do, especially by any member of the local or federal government. You can be certain that many of those who refuse to wear a mask, citing freedom of choice or individual decisions, are to be found in those places where the increase of infection and death is especially noticeable. For example, the enormous spike of cases in South Dakota followed directly from the vast celebration of the motorcycle rally in Spearfish, done almost completely maskless and including perhaps 500,000 bikers. Such irresponsible behavior is not to be condoned as “expressions of personal freedom,” but need to be pilloried as reckless individualism without any concern for the results. “The devil take the hindmost,” as the saying goes, and in that case the devil in the person of a horde of beer- swilling bikers, surely did.

From the founding of the nation 400 years ago, individualism has been the hallmark of our ethos. The immigrants from England brought with them a deep strain of this individualism, escapees from a government of religious demand that they uniformly eschewed. In this new land they set out to create a place where they could “breathe free,” where they could express religious life in any way they chose (though that was hardly universally the case), where their decisions were not be constrained by any governmental or religious authorities. At John Kennedy’s inauguration as president in 1961, he spoke a much-quoted phrase: “Ask not what your country can do for you; ask rather what you can do for your country.” High-flown oratory indeed, but latent in the phrase is the reality that the common first concern of most US Americans is what the government, along with all others who have something to hand out, can do for them. The issue of community, of a common good, of “beloved community,” as Martin Luther King, Jr. was fond of saying, unfortunately is in our time too rarely expressed. 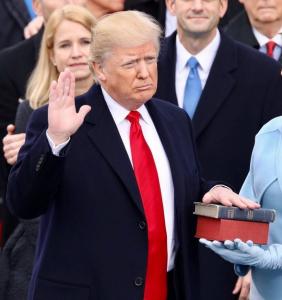 In the recent election, now concluded, save for the foolish holdouts populating a dark White House bunker, over 80% of self-proclaimed evangelical Christians voted for the incumbent, Donald Trump. There have been extraordinary handwringing and furious astonishment in response to this fact, particularly by those of us who do not see ourselves as “evangelical” in the same way that these Trump voters do. We just cannot imagine why a Christian of any sort could bring herself to vote for a misogynist, narcissistic, race- baiting bully like Donald Trump, proclaiming at the same time their allegiance to Jesus. Frankly, it is incomprehensible. But as I think about it some more, I may begin to understand that vote a bit.

Modern Christianity has become in the minds of many a uniquely individualistic tradition. Jesus came to save me, and if I follow him, or “take him into my heart,” as the saying goes, I will join him in heaven. Is that not the final import of John 3:16, the “football verse,” held by some believer or another in the stadium end zone in order that millions of fans might witness the central truth of Christianity expressed in that one verse? Right here we can discover the profound irony of modern Christianity, an irony that has cemented in the hearts of vast numbers of believers a basic confusion about what Christianity is finally about.

John 3:16 is not about my individual salvation in Jesus, despite how long that chord has been played in modern evangelicalism. It is not an individualistic counterpart to my freedom to choose to believe, my decision to follow Jesus. The fact that so many Christians imagine that John 3:16 reinforces their individualism is a microcosm of exactly why Christian belief has been smothered in the individualistic trope of our national belief system. John 3:16 is plainly and clearly not about me alone, walking on a pleasant beach with the Master. The word used to describe just what it was that Jesus was sent by God to “make whole,” a better translation of the traditional “save,” is Greek “cosmos.” God “so loved the cosmos,” the text reads, not merely me, not merely you, but the whole cosmos. And that is the reason, says John, Jesus came to dwell among us, “full of grace and truth.” When Jesus was asked, more than once according to several gospels, how he might best summarize the commands of God, he quoted first a famous Jewish sentence from the book of Deuteronomy: “You must love the Lord your God with all your heart, mind, and life,” and then added a second phrase, this time from Leviticus, “and your neighbor as yourself.” What Jesus came to say may be found in those memorable ideas—love God, love neighbor. Please note what that central claim does not say: it does not say that looking out for number one is the essence of Christianity. Quite the opposite! Looking out for God that then leads to looking out for your neighbor, summarizes succinctly and clearly what it means to be a follower of Jesus. It is a direct repudiation of US America’s penchant for a stark individualism.

Donald Trump played right into that perverse individualism by calling the pandemic a hoax, by refusing to wear a mask, by demanding that his followers rise up against the calls to shut down, by fanning the flames of dissent against actions that serve the neighbor rather than the self, and now by claiming with increasing absurdity that the election was “stolen,” that Trump really won, that all followers who love freedom, who hate “socialism” (a synonym for community concern), should protest, should come out in droves, and, maskless of course, make their cry for individual rights known. We all are witnessing at this treacherous moment in our nation’s history, a loud play for individualism over communal concern. It is all too true and all too terrible that this call to individualism is quite literally killing us. True Bible-loving Christians know that in the end there are just no individual truths in its pages; all Bible truth is communal truth, and if we continue to avoid that fact, we doom ourselves to an individualism that will kill us, as a nation and as citizens of that nation.

7 Reasons the Bible is NOT...
All Set Free
Related posts from The Peripatetic Preacher 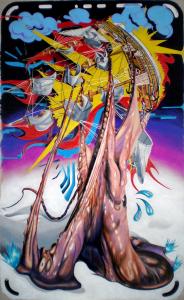