You may recognize a quotation from Shakespeare’s “The Merchant of Venice” from Act 5 that poetically hymns the power and human value of music.

“What sweet music creeps into my ear.”

Lorenzo here woos Jessica with music amid “the soft stillness of the night.” The title of my essay today comes from William Congreve’s 1697 play, “The Mourning Bride.” The fuller quotation is: “Music hath charms that soothe a savage breast, to soften rocks, or bend a knotted oak,” a startlingly sharp paean to the sheer power of music to affect us in ways unforeseen. This quotation is often misquoted, changing “breast” to “beast,” but the meaning may be quite similar; music is a crucial element in human life, and has the capability to effect significant alterations in the ways we live and cope in the world. And, as Shakespeare reminds us, those without music may be fit for “treasons, stratagems, and spoils,” whose “affections are dark as Erebus,” that primordial figure of Greek mythology that represented darkness. And Shakespeare goes on in the scene to warn, “Let no such man (or woman!) be trusted.”

I have been thinking a good deal during the course of the pandemic about music, and its tremendous force in my life. Each morning, my wife Diana and I wake up to music from our preferred radio station, KUSC, here in Los Angeles. It is the classical music station for Southern California, and bills itself as the most listened to such station in the country. It presents a wide variety of classical music, from the renaissance to the baroque to the classical to the romantic to the modern to the contemporary, introduced and often explained by knowledgeable hosts, including the venerable Jim Sjveda who for over 40 years has hosted a five-day-a-week show from 7PM to midnight on the station, and who seems to know about everyone who writes, plays and listens to such music very well indeed.

I have often called myself a musical snob, since I listen exclusively to this sort of music. On our Alexa device, Diana and I ask “her” to play KUSC during our dinners, or if their choices at that moment do not please us, we ask for Sirius XM, channel 76, Symphony Hall, that we also have in our car, and if even they are playing still another Haydn symphony, of which there are 104, Haydn not being our particular cup of tea, we ask for Sirius channel 75, The Metropolitan Opera station, and hope for some elevating piece of music theater to lift the spirit. We do on occasion enjoy musical theater of a lighter vein (I think Stephen Sondheim’s “Sweeny Todd” is the finest example of that genre of the past half century), and will then turn to the Sirius station that offers that music. Music is for us a huge gift, without which our lives would be immeasurably poorer. During this time of isolation and distancing, music has become, if anything, even more important. To wake up to Vivaldi or Bach or Beethoven or Brahms is for us to start the day right.

I know well that our musical taste is a decidedly minority one. I need only to drive down the streets of LA, moon roof open, to sample the wide variety of musical genres that are available to my fellow Angelenoes. Because our community is a majority Latino/a one, I often am serenaded by mariachi music from the cars around me. And also there are the infectious beats of hip-hop and other pop genres that waft from numerous automobile stereos, including the street poetry that accompanies those beats, sometimes crude but often richly redolent of lives far different from my own. All of these musical sounds add to the eclectic symphony of our city, and I would not be without any of them, though they are hardly my listening choice. On occasion, when I am idling at a stop light, and am overwhelmed by the blasting music from the car next to mine, I vainly try to filter the sound out by raising my windows and closing my roof, along with turning up my own musical choice. Somehow, that attempt limits my awareness of the people around me, of their unique lives, of their struggles and joys. When I try to tune their music out, I am in effect tuning them out, and I feel some sense of shame in doing so. I know the music I like, and will continue to play, but their music clearly has for them “charms to sooth the savage breast,” and plays a role for them not unlike the role my music plays for me. It occurs to me that I should be more fearful of silent cars, or cars offering talk radio hosts who espouse ridiculous conspiracy theories or hate-filled political rants. It is those folk, as Shakespeare warns. “who should not be trusted.” Give me a mariachi-filled car any day! Here is the fuller quotation from the Merchant of Venice:

The man that hath no music in himself,

Nor is not moved with concord of sweet sounds,

Is fit for treasons, stratagems and spoils;

The motions of his spirit are dull as night

And his affections dark as Erebus:

The Bible of course prizes music as well. Multiple psalms urge us “to sing to YHWH,” either a new song or a venerated one. Whenever significant events in Israel’s life occur, they usually break out in song, from Miriam’s chorus of song and dance at the Sea of Reeds, to the rich song of Deborah and Jael in the book of Judges, to the hymn that accompanies the appearance of the Ark of the Covenant in the tale of Saul and Samuel, to songs David sang to sooth the troubled Saul and to hymn his own prowess as shepherd and king. At the last supper of Jesus, he and his disciples “sang psalms” as a part of the meal, and ever since Christian worshippers have sung their praise to him and to the God who sent him to us.

We need to sing; it is in our DNA as humans. One of the pandemic’s most terrible effects is its barrier against communal singing, either in church or on the soccer pitch or in the stands at a baseball, basketball, or football game. How we long to sing together once again! I know I do, more than I can say. As I have said in a previous essay, I fear I may never again sing in a church choir, my formerly robust baritone now reduced to an old man’s croak. Still, I cannot wait for the day when we can once again sing together, however poorly some of us will do it.

Even if you are not a lover of classical music, and I imagine many of you are not, I would commend to you what I consider to be perhaps the single most beautiful choral piece ever written. Not surprisingly, its text comes from the very Shakespeare play and the very same Act 5 with which I began this essay. It is Ralph Vaughn Williams 1938 delectable anthem for 16 solo voices (though other versions have been recorded) named “Serenade to Music,” 14 minutes of divine playing and singing. Go to YouTube for several options for hearing this magical piece of music, just the sort of thing we need during these strange times. “One who has not music in his (or her) soul” cannot, I think, traverse COVID-19’s ravages with equanimity and hope. Let your music continue to resound in your ears; I know mine will continue long after the pandemic has receded into a distant, though painful, memory. For now, I will listen especially attentively to the sweet sounds of music creep into my ears. 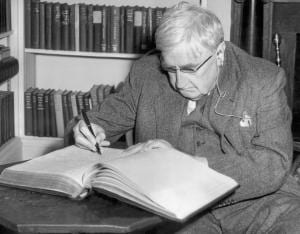 November 23, 2020
The Peripatetic Preacher Individualism is Killing Us
Next Post