The Power Broker The Peripatetic Preacher

I have just finished a huge book that matches its extraordinary length with an equally extraordinary significance. It is Robert A. Caro’s 1975 Pulitzer Prize winning biography of Robert Moses, The Power Broker: Robert Moses and the Fall of New York (1974). I got a copy of the massive tome not because I had any particular interest either in Robert Moses, a name I hardly knew, or in New York City, despite several lovely visits there and the fact that my eldest grandchild was born there. I picked the book up primarily because I had read the superb, and even more lengthy Caro biography of President Lyndon Johnson, which currently encompasses four hefty volumes with a fifth promised, if Caro, who is now 85 years old, lives to write it. I sincerely hope he does, because the conclusion of Johnson’s life is well worth Caro’s fabulous reportorial skills and keen writing style.

Caro was a New York reporter in the 1960’s and was moved, he says, to write about Robert Moses, one of New York’s most celebrated builders as long-time Commissioner of Parks and Roads in the city, when Caro began to question the need for still another bridge connecting portions of the far-flung islands of the city, adding to the plethora of bridges, tunnels, and highways that Moses had championed and built throughout the five boroughs of the expanding metropolis. Caro imagined that the book project would take some nine months to complete, but in reality the book only appeared after seven years of deep dives into reams of paper, after 500+ interviews, including seven sit-downs with the subject himself, one of which lasted an entire day. Eventually, Caro turned in a manuscript of over one million words that was reduced by the editor to some 700,000, claiming that no one would ever read that much about Robert Moses, especially if the work appeared in two volumes.

The work was published, and almost immediately received near universal acclaim, resulting in the Pulitzer mentioned above, along with a bevy of authorial awards and prizes. Caro and his historian wife, Ina, were nearly penniless when the book came out, having sold their Brooklyn home and moved to a small apartment elsewhere in the city in order to finance the long research and writing project. In the ensuing years, Caro has been lionized over and again as our finest living biographer, a grand claim given the fact that the non-fiction ranks of 21st century US America are replete with superb biographers: Ron Chernow, H. W. Brands, Jon Meachum, to name only a few. Suffice it to say that Caro’s huge works are magnificent examples of the biographer’s art.

Of course, one person would agree with exactly none of what I have written so far, and that person is the subject of the book, Robert Moses. Caro’s book appeared well before Moses’s death, and it is fair to say that Moses was less than pleased about the way that Caro had portrayed him; in fact, he found nearly every bit of Caro’s picture jaded, biased, and flat wrong. In a furious and cankered reply to Caro, Moses wrote a 3500- word screed, attempting to rebut nearly all of Caro’s work. Having read that reply, I can say that Caro characterized Moses quite correctly, naming him as fevered in his angry command, insulting in his personal and authorial attack, and vicious in his rebuttals of Caro’s work. In short, Moses’s remarks reveal almost exactly the man Caro showed us in his monumental work. I think Moses did himself no favors in his response, demonstrating spleen and bile in equal measure against Caro, his publisher, and anyone who would fork up the $17.95, a considerable sum for a book in 1974, no matter how large (it currently sells for $26 in a well-sewn paperback). Of course, when Moses answered Caro, he was in his 80’s and well retired, and stripped of any semblance of his former vast powers. At one time in his career, he was the head of 12 different agencies, connected in numerous ways with contractors, cement businesses, steel suppliers, and politicians of every stripe. He was, according to the careful accounting of Caro, the most powerful man in New York City, wielding authority unmatched by any mayor, city councilman, or even most state governors. Even FDR himself was not able to reign in his focused interest in recreating the city to his own special vision.

And that vision was primarily highways, bridges, and tunnels. When it became more than obvious that NYC needed desperately to build and rebuild its subway system and its suburban railroads, Moses, who held the purse strings of vast amounts of city, state, and federal money, was unyielding in his insistence that only highways, bridges, and tunnels were the keys to a great, expanding city. He simply could not, according to Caro, be convinced by the increasingly obvious facts that more highways did not lead to the easing of traffic congestion, but instead led inexorably to increased congestion. No matter how wide the roads, the motorcar had an inevitable way of filling them over capacity. In his furious response to Caro’s book I mentioned above, he said in several different ways that he had no control over mass transit, but only highways. Mass transit was someone else’s problem, and if they were not able to build such facilities, it was their failure and was no problem of his. Of course, what he fails to admit is that he held the power to invest in something other than roads, and he flat refused to do so. His vision of beautiful, gleaming roadways, leading to lovely parks and woodlands, remained only a romantic fantasy. As Caro shows again and again, that vision led only to vast acres of tract homes, the removal of many of those woodlands, and unimaginable vehicle congestion, both leading to the central city, where all the jobs were, and the same terrible car jams leading back home after work was done. Rather than a pleasant dream of people whisking to and from work on superb roads, Moses made it possible for those people in their cars to move at the top rate of 16 miles per hour, both to and from Manhattan, and usually not that fast. The dream had become nightmare.

Caro’s biography is a cautionary tale of power gone amuck. Moses held vast power for 44 years in New York City, and wielded it with cleverness and great skill during that entire time. He was brilliant, laser-beamed focused, and in general unwilling to hear any disagreement with his ideas. In short, the power he gained was used for his vision alone. Early on, that power may have been held with the betterment of the city in mind. But as the years moved on, that same power was used in the service of Robert Moses. I did not glean from the book that Moses employed the power for self- aggrandizement, to amass a great fortune, however well he lived from his many public works. The power had more to do, in Caro’s telling, with Moses’s need for approbation, his narcissistic desire for adulation and eternal monumentality. Bigger dams, larger tunnels, wider highways, more productive hydroelectric facilities, taller and longer bridges drove his actions far more than wealth.

Again and again, critics of Caro’s book speak of it as “Shakespearian” in its portrayal of Moses, and I could readily point to Lear or Macbeth or Richard III as models of powerful men waylaid by their use and abuse of power. As I read, however, what appeared to my mind was the poem of John Milton, “Samson Agonistes” (1667-71), a wonderful reflection on the abuse of power, containing the following unforgettable lines:

God, when he gave me strength, to show withal How slight the gift was, hung it in my hair.

Power has its limitations, warned Milton, writing as a blind man himself about another man who was made blind and helpless despite his vast power. And another famous phrase popped to mind, this one from a far earlier time:

Give me a lever long enough
And a prop strong enough,
I can single handed move the world.

That line from Archimedes is usually employed by mathematical types to prove the potency of a keen and facile mind of supreme invention, but I see it also as a symbol of human hubris, claiming that my own power can control and conquer the world.

And, of course, even more famous lines came to me as I read: “What does anyone gain if they conquer the whole world, but lose their own life? What will anyone give in return for their life” (Matthew 16:26)? These lines from Matthew’s Jesus sum up for me the dangers of vast power, and delineate the life of Robert Moses. The end of Caro’s long book is haunting. Moses was asked by the Roman Catholic Diocese of New York to speak at the dedication of a huge, marble bench designed for a place of reflection. Moses said this: “Someday, let us sit on this bench and reflect on the gratitude of man.” Caro writes, “Down in the audience the ministers of the empire of Moses glanced at one another and nodded their heads. RM was right as usual, they whispered. Couldn’t people see what he had done? Why weren’t they grateful?”

No time to think about what...
slacktivist
Related posts from The Peripatetic Preacher 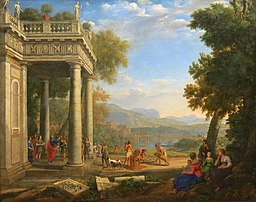