David imagines that he has gotten away with his appalling actions of 2 Sam.11. He has hidden his adultery with Bathsheba behind his arranged murder of her husband, Uriah, though it is difficult to think that either of these deeds could seriously be unknown by at least a few palace regulars, not to mention by several soldiers, witness to Uriah’s mysterious death at the walls of Amman. Nevertheless, both David and Bathsheba act as innocents, with the latter observing the barest minimum of mourning for her husband—the usual 7-day weeping was perhaps shortened a bit—and the former precipitously sending for his lover, ensconcing her in the royal palace, and quickly making her his wife, a new wife added to the significant harem springing up around the king. Their love-making was surely resumed in earnest, at least until Bathsheba’s swelling belly made such activity problematic. All seems, if not normal, at least settled and unremarkable. But, the narrator now breaks into the tale—something rarely done in these stories—and proclaims, “the thing that David had done was evil in the eyes of YHWH” (2 Sam.11:27). Surely, the thing is known after all, and there will be a reckoning.

That reckoning comes in the person of Nathan, David’s court prophet. We last saw Nathan telling his king about a dream from YHWH he had, warning David against his plan to construct a temple for the nomadic God (2 Sam.7). From that story we may surmise that Nathan has an intimate relationship with the monarch, and is privy to his most secret thoughts and ideas. Given the way Nathan speaks to David, it is more than obvious that the prophet has discovered the horrific actions of the king and his consort in full, and is not the slightest bit reluctant to share what YHWH thinks of such shenanigans.

He begins by telling a story, a parable designed to snare David in a trap of his own making. One cannot help but think of another, far more famous, use of a play to entrap a sinning monarch. In Shakespeare’s magical “Hamlet,” the title character is visited by the ghost of his murdered father, who tells him that his death was not accidental, but was devised by his devious brother in order to marry his queen, Gertrude. The ghost commands that Hamlet exact revenge on Claudius for the murder, and the bulk of the play involves Hamlet’s ineffectual attempts to fulfill his dead father’s demand. In the end, deaths aplenty occur, including Hamlet’s, along with the murdering brother and his wife, the queen. But before that grisly denouement, Hamlet arranges a play “wherein he will prick the conscience of the king.” And that is precisely what Nathan has in mind for this ancient murderous David with his pointed tale about two men. 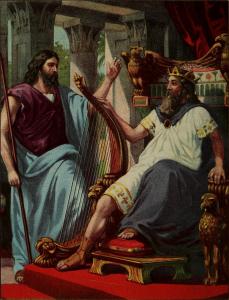 The story is readily seen to be both traditional in style and poetic in construction. “Two men were in a single town,” it begins, and, as often in such stories, one of the men was rich while the other was poor. The rich one overtly abuses the poor one by stealing his one ewe lamb in order to serve the slaughtered beast to a visitor, despite the rich man’s numerous flocks from which he readily could have selected a lamb for his proposed meal. It may be surprising that David would somehow imagine this obviously fictional tale to be a factual report needing the adjudication of the king. However, it may well be that Nathan hopes by the telling of the story to “prick the conscience of the king;” perhaps David may be suffering a guilty conscience due to his monstrous acts, and may equally be lured into doing the right thing by proper kingly actions with regard to the story. After all, one of the very first obligations of the king of Israel is to dispense justice, most particularly for those who have little power in the land; the coronation Psalm 72 makes that requirement paramount.

David replies to Nathan’s lurid tale with appropriate royal ire, not hesitating to bring YHWH into his angry judgment. “As YHWH lives, doomed is the man who has done this! The poor man’s ewe he shall pay back fourfold, because he has done this thing, and because he had no pity” (2 Sam.12:5). In reality in Biblical law the theft of property demands a fourfold recompense, but not the penalty of death. By speaking in such an exaggerated way, David has inadvertently conflated the “theft” of Bathsheba and the literal death of Uriah. In addition, the theft of the ewe by the rich man could have led only to his addition of the lamb to his own flock, but in the case of Bathsheba her theft has led to the spilling of blood, the ewe for slaughter and the husband for death. David will not be condemned to die by the story, but the pallor of death will hang over his house for the rest of his life. As Robert Alter notes in his commentary, in the Talmud (a compendium of early Jewish law and instruction) “the fourfold retribution for Uriah’s death will be worked out in the death or violent fate of four of David’s children: the unnamed infant son of Bathsheba, Tamar, Amnon, and Absalom.” And after the prophet has outlined the chain of events that David’s foul actions will set off, David says, “I have offended against YHWH” (2 Sam.12:13). Though David himself will not die for his actions, the son he has sired will die, along with others of his household as the Talmud suggests.

Here is a parade example of the continuing consequences of evil behavior, consequences that like the rippling and expanding circles in a pond take a long time to dissipate. Donald Trump’s constant stoking of fears against all sorts of people, coupled with his continual and vile attacks against those he perceives as his enemies, had their public consequences in the attack on the capitol on Jan.6. The horrors of slavery, a central feature of the growth and prosperity of US America for several centuries find their consequences in the social inequities and constant violence against people of color in our own time. The fact that a very high percentage of those imprisoned in our jails were abused as children by parents or caregivers demonstrates again that evil acts bear inevitable consequences. David may have lived many years after his affair and murderous acts, but his life was one filled with pain, struggle, and death, culminating in his own lonely death, old and cold, directly after his command for his heir, Solomon, to get murderous revenge on an old and helpless enemy (1 Kings 2:8-9). David’s lust for Bathsheba was by any measure the beginning of the end of his life, a life forever tarnished by his baleful actions, forever tainted by his rash and unseemly behavior. No later attempts to clean up his story, and there have been many, can ever completely expunge this sordid truth from his biography. 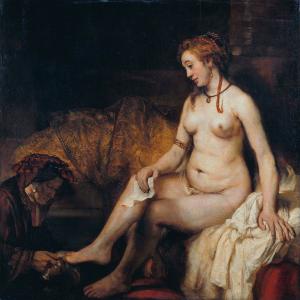 June 7, 2021 The Peripatetic Preacher. 11th Sunday After Pentecost. August 8, 2021. 2 Samuel 18:5-9, 15, 31-33. "The Death of Kings"
Recent Comments
0 | Leave a Comment
Browse Our Archives
get the latest from
Progressive Christian
Sign up for our newsletter
POPULAR AT PATHEOS Progressive Christian
1

A night with Lot in Sodom,...
slacktivist
Related posts from The Peripatetic Preacher