An Old Tradition For The New Year

An Old Tradition For The New Year January 3, 2017 The Witches Next Door

The calendar in our office observed the New Year by engaging in an old tradition and did the thing that calendars look forward to doing all year. The last “X” was etched into the final box and 2016 became 2017. Inevitably, the old year became a new year. This is as it should be. People all over the globe hoisted a glass, kissed a love, watched celebrities lip-syncing their greatest hits, gathered around fires, or went to bed early wondering what the fuss was all about anyway. No matter what celebrations or non-celebrations might have looked like, collectively, we drew a breath and said “The world is new again”.

However, the two of us started the new year with an old tradition. On New Year’s day, we drove to a secluded spot on the Northern California coast. We parked the car precariously between a well hammered guard rail and a bend in the road that had cars hurtling around it at speeds much faster than seemed advisable. The smell of the sea didn’t so much as waft into our noses but was rather forced up our olfactory canals by near gale force gusts of wind that had us immediately clamoring for scarves, gloves, hats, jackets, and left us wondering why were we doing this ridiculous old tradition. Then we made the short trek up the deer trail to the cliff’s edge.

The sea below was choppy. The often picturesque and pirate fantasy invoking cove below us was awash with displaced wood and long strands of uprooted kelp.  The cove where we have spotted seals was full of short fast waves, that crashed in on the rocks and their eternal, temporary meetings sent sprays of water well up into the air. Here we stood; high on the rugged cliff, battered by the wind, we readied ourselves to acknowledge a year that seemed hellbent on destruction. Then we started our more than decade old tradition and reached into our pockets.

Each of us pulled out a shiny 2016 penny and looked at it closely. Both of us recounted all of the challenges that the year had brought. We talked to 2016 as if it was standing right there with us on the edge of the abyss. We talked about the joys and opportunities the year brought too. It was lovely. Then we unceremoniously sent 2016 hurtling through the air, to be dashed once and for all on the rocks below, and just in case the year wasn’t finished, we shouted “good riddance”!

Later in the day we opened the cupboards in the kitchen. “We haven’t used this smoothie-making banana squasher thingy-ma-bob since it was given to us seven years ago. It’s gone!” And so the conversation went for the next few hours. Every plate, every bowl, every packet of tea and jar of spice was deliberated over and, like a conversation with Ma’at, items ended up being lovingly put away or cast into an ever growing pile of “crap we absolutely don’t want or need or knew we even had” to be devoured (or just given away). But this wasn’t just a purging of expired tins of soup and Tupperware tops that had no Tupperware bottoms or the aforementioned smoothie-making banana squasher thingy-ma-bob, this was an intentional, magical spell that had us asking over and over again, “why are we holding on to this?”

Here’s an interesting thing we discovered. Most of what we threw away fell into two categories: 1) Something that was actually expired, like foodstuffs or 2) a thing that was pretty new but neither of us had any real attachment to. What we kept were bowls and serving dishes that meant something to us or our family. We retold each other stories of how we chose this particular plate or why it was so vitally important that this teapot be kept. By throwing out the new and disused (and never used), and rediscovering the old and treasured, we found something of ourselves that had also been consigned to the far corners of the cupboard and forgotten about. We made room for us. Our “relationship” cupboards have been stuffed with so much that’s been labeled as”far too important to let go of” that we stopped asking why it was far too important. We just sort of assumed it was and left it to gather dust and cat hair all by itself.

With all of the space we’ve created on counter tops and cupboards and spice cabinets, we’re able to see and touch and use beloved bowls and kitchen tools. We’ve found anew, that the old glasses we loved to drink port out of are actually the perfect glasses to drink port out of and we don’t need to hold onto the crappy glasses we drank port out of that weren’t really meant for drinking port out of in the first place but we did because we couldn’t find the real port glasses we loved so much as they were hidden behind that ice cream making thing we got for a Christmas present years ago that we never used but had to store somewhere.

Of course, cleaning the cupboards is never just about cleaning the cupboards. As above, so below. As within, so without. Letting go of the previous year, cleaning out what was stale, making room for the important pieces; this is the ongoing work of being in relationship together. This is the magic of being an ‘us’. Let the magic of this year begin with a deep appreciation for all that we carry and all that we must throw away. 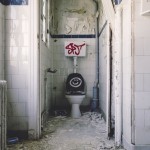 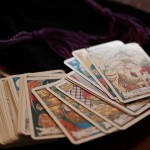 January 12, 2017 The Magician - Tarot For Today
Recent Comments
0 | Leave a Comment
Browse Our Archives
get the latest updates from
The Witches Next Door
and the Patheos
Pagan
Channel
POPULAR AT PATHEOS Pagan
1