I’ve written a little bit about my relationship with Judaism before.  In this Catonsville Patch post from over a year ago, I compare the ways in which I am Jewish to ways in which I am Jew-ish.  In a post on my own blog last March, I wrote about how I had a Passover Seder without realizing it.  I am continually amazed at how every time I learn something new about Jewish law, customs and teachings, I find myself saying, “Hey!  I do that, too!  For that same reason!  Except, I didn’t know it was a Jew thing…”  While you’d have to be on drugs or delusional to call me observant, I can assert with great conviction that I have a strong Jewish identity – always have.  Judaism’s funny that way.  You don’t meet many “Secular Catholics” or “Secular Mormons” the way you might meet a Secular Jew.

Growing up in Brooklyn, I was surrounded by Jews, of course.  All through my schooling years, though, my friends were as likely as not to be Jewish.  Or black.  Or Asian.  or Puerto Rican.  Brooklyn’s awesome like that.  Even though the only Jewish holidays we celebrated in our family growing up were Hanukkah and Passover, and I only went to synagogue to hang with my dad who played organ there, I knew I was Jewish and never felt alone in that.  Then I went to college in Baltimore.

Before classes even started, I was dating the (Jewish) guy who would become my boyfriend for 2 years, but on one of those first dates I remember him having trouble believing I was Jewish. “Really?  Are you sure your’e Jewish?  With the light hair and the small nose?”  (He was probably kidding – thinking back, I’m guessing my name – Aliza Lirtzman – was enough to give me away.)  Yeah, he was way more religious than I was, and taught me lots of stuff about my religion.  So that first month of school I was still feeling pretty Jewy.  Or so I thought.

One pretty September day, I was walking from class to the Student Union, when I passed a classmate who said, “Happy New Year!”  I kind of went, “Huh?” as he passed, but made the connection quickly enough to wish him the same.  It was Rosh Hashanah.  The Jewish New Year.  When I grew up, the holiday was marked only by my having a day off from school and my dad having to play in synagogue all day.  Here I was in Bawlteemawer, on my way to class without either of those reminders.  Sure, I had a Jewish boyfriend, and knew other Jews on campus, but I wasn’t exactly raised steeped in Judaism’s finer points, like when one of the most important holidays took place, or even why the Jewish calendar was so screwy that it didn’t neatly line up with the regular calendar. 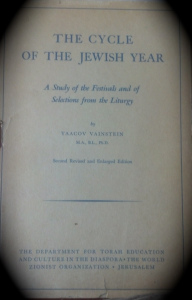 I was struck by something else when my classmate wished me a Happy New Year.  Once I realized to what he was referring, I found his wishes comforting.  “That’s kinda weird,” I thought.  Why would I find something comforting when I didn’t feel like anything was troubling me to begin with?  It took me a while, but I thought about it enough to come to the following conclusion: when I went to college, I became minority.

Growing up in Brooklyn, I never felt like that – I mean, pretty much EVERYONE in New York is a minority in one way or another – even white, Christian males.  But here?  At Johns Hopkins?  In Charles Village?  A Jewish girl?  Yup.  I was a minority.  It was a weird, complex yet subtle transition, and it had taken place for sure.  How else to explain the feeling of unique connectedness I felt with my classmate?  The feeling of “Whew, it’s nice not to be the only one” that was subconscious, but close enough to the surface to emerge with a single “Happy New Year?”

The funny thing is, I don’t remember anyone in Brooklyn wishing me a Happy New Year over Rosh Hashanah growing up.  We weren’t religious, and didn’t really travel in observant circles.  It probably happened sometimes, but it sure didn’t have the effect on me as when I was in my first month away at college.  Yet, even though it wasn’t a yearly celebration for me in Brooklyn, my classmate’s kind wishes brought me a slice of home.  That is something EVERY freshman in college needs in those days of transition.  So, thanks, George Whatever-Your-Last-Name-Is.  You gave me something I was missing even before I realized I was missing it.

It happens my parents will be visiting us this weekend, which coincides with Rosh Hashanah.  Maybe we’ll accidentally observe by accidentally dipping an apple in some honey, or accidentally explaining to my kids how the holiday is related to the reading of the Torah.  And my youngest son will have his first trumpet lesson.  It ain’t a shofar, but it’s about as close as you can get Catonsville.

October 8, 2012 Is That a Birdseed Milkshake?
Recent Comments
0 | Leave a Comment
Browse Our Archives
get the latest from
Best of Patheos
Sign up for our newsletter
POPULAR AT PATHEOS Jewish
1