Silver Bullets? I’d Rather Have Chocolate Ones.

Silver Bullets? I’d Rather Have Chocolate Ones. May 26, 2013 Aliza Worthington 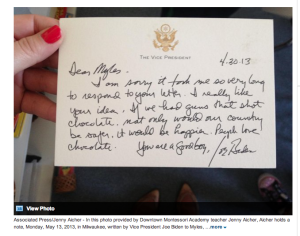 A seven-year-old boy named Myles wrote a letter to Vice President Joe Biden with his solution for gun violence. Chocolate bullets. The Vice President is completely on board with this idea, because, as he says in his letter back to Myles, “People love chocolate.”

Some fellow writers at The Broad Side had very strong reactions to this story. Danielle declared “If someone shot me with chocolate…they would be my new best friend.” Karen insisted “must be milk chocolate. Dark gives me migraine.” It did strike a nerve, though, with Rebekah, who claimed that “…now I’m all bitter that my son never got a response when he wrote to Obama saying we should have ‘no more guns in this world.’ Also, I want chocolate.”

This conversation took place right before I rushed out the door to pick up my youngest at elementary school. My newly found mad reporter skillz kicked into high gear, and I wrote out a few questions to ask fellow parents at pick-up. After giving them the low-down on this new gun control development, they agreed to answer a few of my questions.

Parent #3 – Didn’t like the idea of anyone shooting anything at her. Even chocolate bullets. Was adamant it would feel like an assault. Even if it were shot through a Nerf Gun. Upon further questioning, she did admit that if someone handed her a chocolate bullet, she would, in fact, eat it.

Parent #1 – Yes. As she stated earlier, she doesn’t like chocolate.

It was at that point the little ones began to spill out of school and no one wanted to talk about chocolate ammunition with the children around. Also, I got the sense they were all beginning to think I was insane, so I thought it best to cut the interviews short.

When I got home, however, I decided to conduct an interview with a friend of mine who is an extremely knowledgeable gun enthusiast. Chris Cataudella is one of my token Republican friends. (I must have Republican friends, or else my street cred as an “open-minded” liberal is seriously compromised.) He, completely coincidentally, this very afternoon published a blog post about his proposal for common sense gun laws.

Anywho, I posed the same basic questions to Chris, with some follow-ups, of course. Because his answers were so…rich. (ba dum bump)

1. What flavor would you recommend for chocolate bullets?

With today’s advances in bullet construction and bullet manufacturing, milk chocolate coating with peanut butter in the center would be the most logical choice for general purpose ammunition (GPA). Bullets can be named “Death by Chocolate.”

2. Do you think there would be a need for child-proof safes for these chocolate bullets?

Absolutely – can you imagine if a child got into that ammunition cabinet? The rise in obesity would bring a whole new round of medical and legal questions.

3. If someone shot you with a chocolate bullet, could you see pressing charges?

What if there was a peanut allergy? Of course I would press charges. (We just established there would be peanut butter in the bullets.)

3a. What if it was a York Peppermint Patty bullet? Dark chocolate on the outside with minty cream on the inside?

I would “Get the sensation!”

4. Can you see global application for chocolate bullets?

The Dutch would be way ahead of us. Would lead to a whole chocolate arms race. Chocolate-tipped ICBMs? Then the government would have to pay off Hershey to not sell to our chocolate secrets to other countries.

Think about Belgium – Germany’s chocolate isn’t nearly as good, and they would want to invade Belgium all over again!

This raises many questions. For example, would candy sellers at malls and other places be required to have a Class III Firearms License?

Another issue might be that California requires lead-free bullets, to protect the wildlife who didn’tget shot by the bullet from eating the bullet which, if it contained lead, would be harmful. (He said that without the slightest trace of irony or sarcasm.) So, if you go duck hunting with chocolate ammunition, there are serious implications for health problems for wildlife in the future. Not to mention, no one wants to hunt ducks that can’t fly because they’re out of shape from eating so much chocolate.

On the plus side, if you’re hunting in the woods and no deer come around, and you run out of munchies, you can always eat the chocolate bullets. On second thought, though, the object of hunting is to hunt an animal in its natural environment where the odds are equal for both hunter and wildlife. If a hunter is loaded with chocolate ammunition, the animals would come running. The scales would tip, and hunting would become baiting.

So many chocolate questions, so little time!

This post was originally published on The Broad Side on Friday, May 24th.

May 28, 2013 How Far Can You "Lean In" If You ARE Pretty?
Recent Comments
0 | Leave a Comment
"No thanks, bible beaters. Keep it to yourselves."
The Darling Kinkshamer Sweet Baby Jesus Frog
"Meh. I don't have a problem with them. I DO tend to go to one ..."
Sami Sweet Baby Jesus Frog
"OK, put on your adult cloths... come on, pull up those pants and realize it's ..."
johnokeefe Nationwide Needs to Apologize
"It strikes me as part of the larger -- and growing -- tendency for the ..."
kesmarn Nationwide Needs to Apologize
Browse Our Archives
get the latest from
Best of Patheos
Sign up for our newsletter
POPULAR AT PATHEOS Jewish
1