So, Then I Covered the President…

So, Then I Covered the President… May 20, 2013 Aliza Worthington

Yeah, so I’ve been fortunate enough to have some of my writing published on The Broad Side lately, and the fabulous Joanne Bamberger (publisher and editor) added me to the Facebook group of contributors where she and others leave fodder for potential pieces for the site.

Last Wednesday, she posted a press release about President Obama visiting a manufacturing plant in Baltimore, and asked if anyone would like to cover it.  And I’m all, “Hey!  I live in Baltimore!” and “Hey!  I’d like to cover it” which I conveyed to her, and “Hey!  What the hell do I know about covering an event of any kind, let alone a Presidential visit???” which I did NOT convey to her.  Not until after she agreed to let me cover it, anyhow.

Sooooooo, once I was approved as media for the event, I waited in line here: 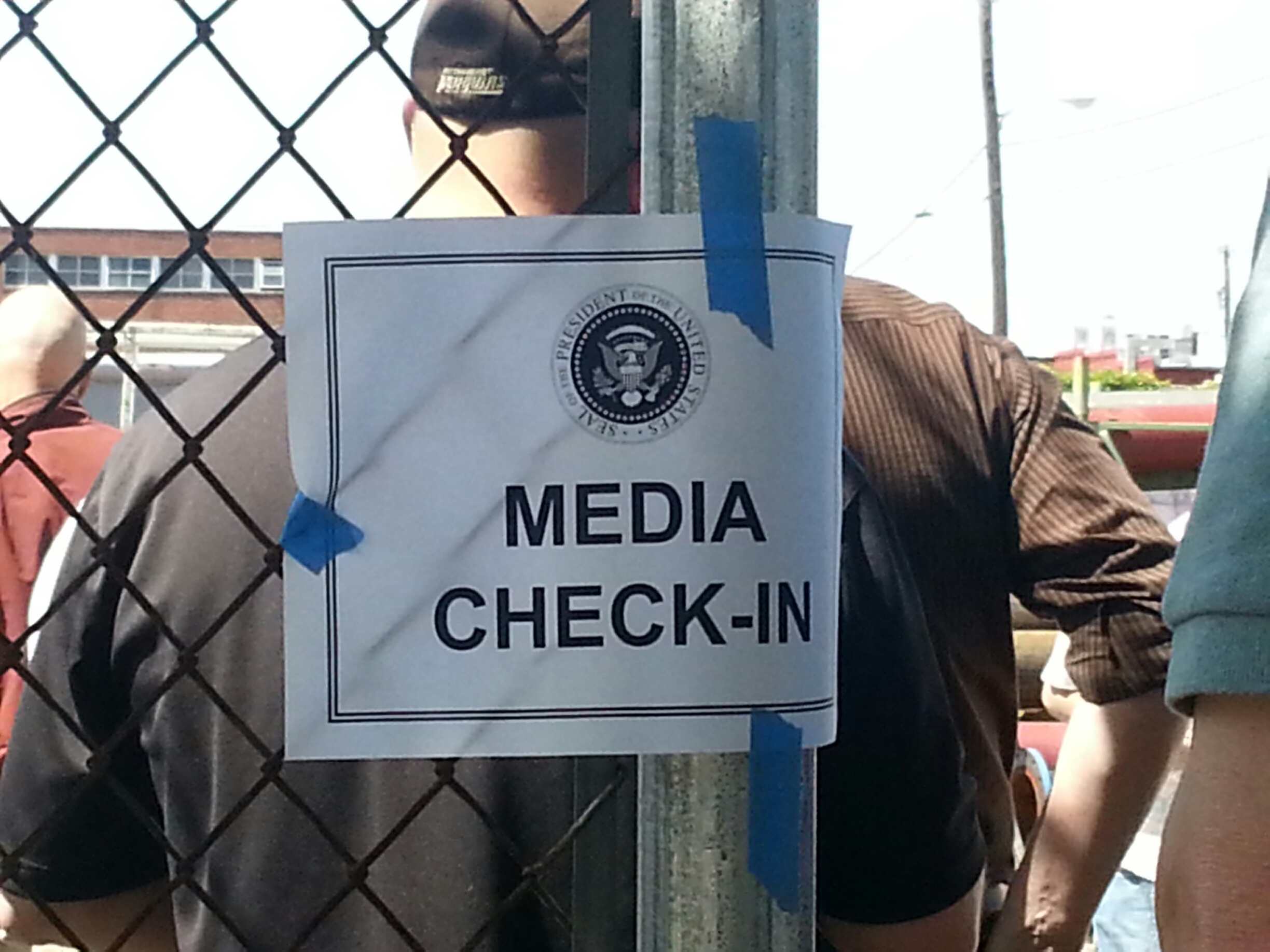 Got one of these: 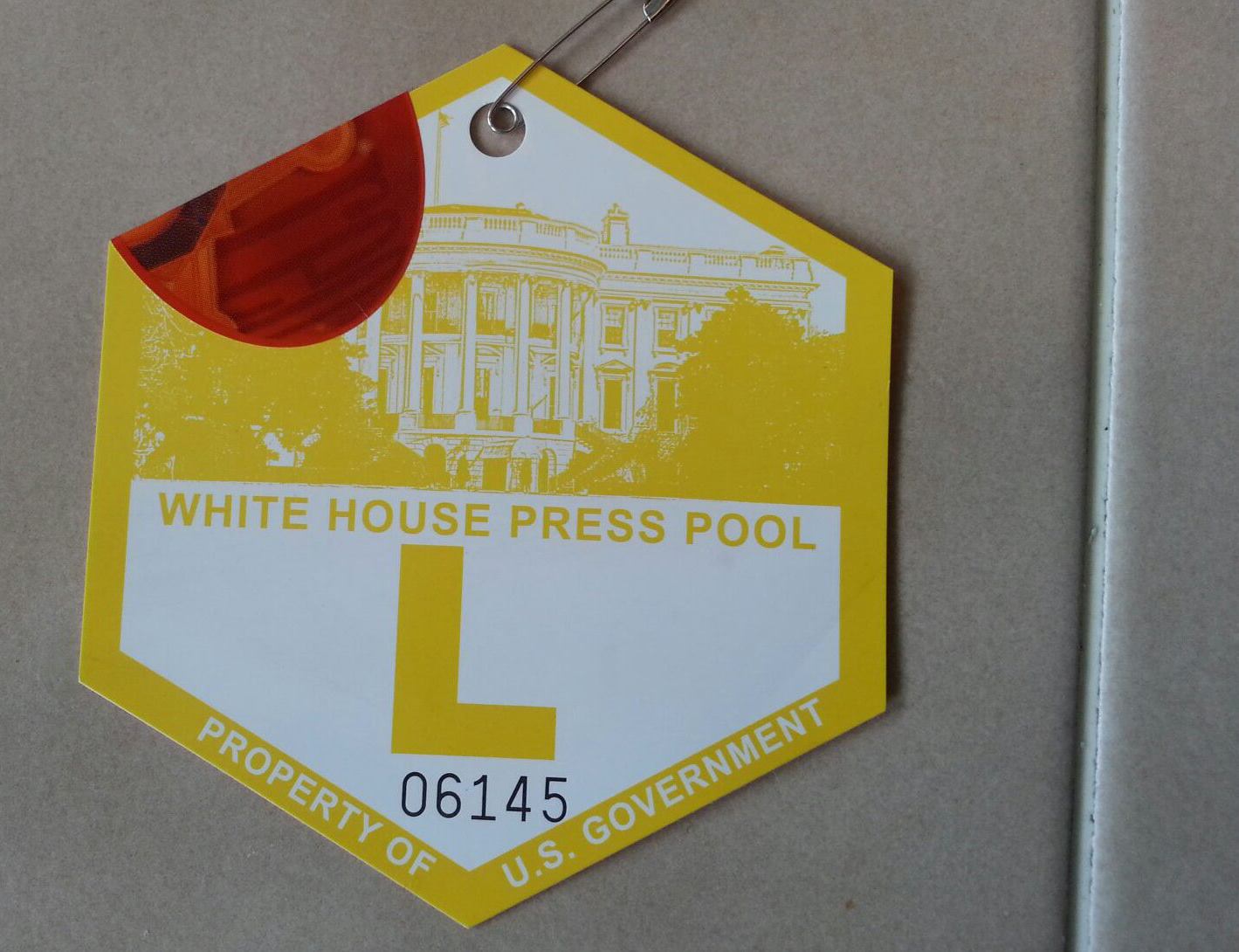 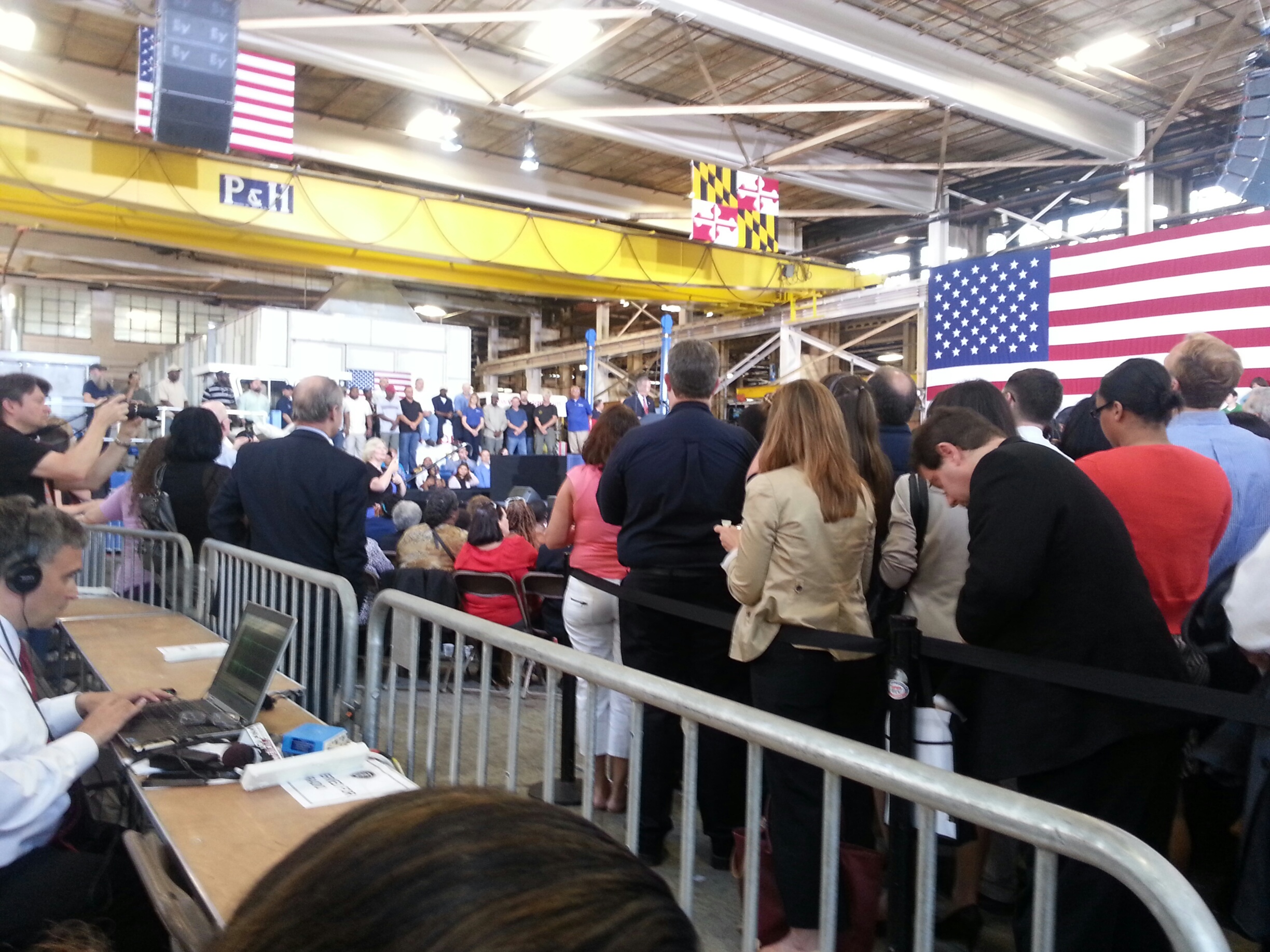 Then realized it was going to be a long wait, so I visited one of these: 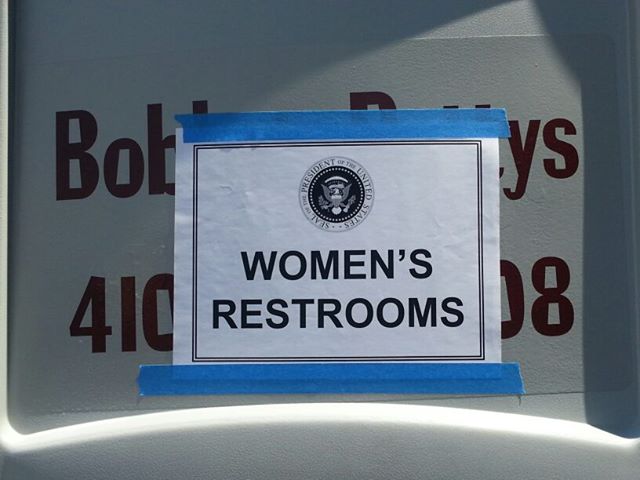 And then I’m all waiting around and trying to look busy like the other reporters around me, and I didn’t think it would look right to play Words With Friends, so I looked up stuff about the facility where we were (Ellicott Dredges – they built the equipment that dug the Panama Canal, dontchyaknow!) and ate my lunch.

So, then someone introduces the guy who’s gonna introduce the President, and it’s Duncan McTaggart! 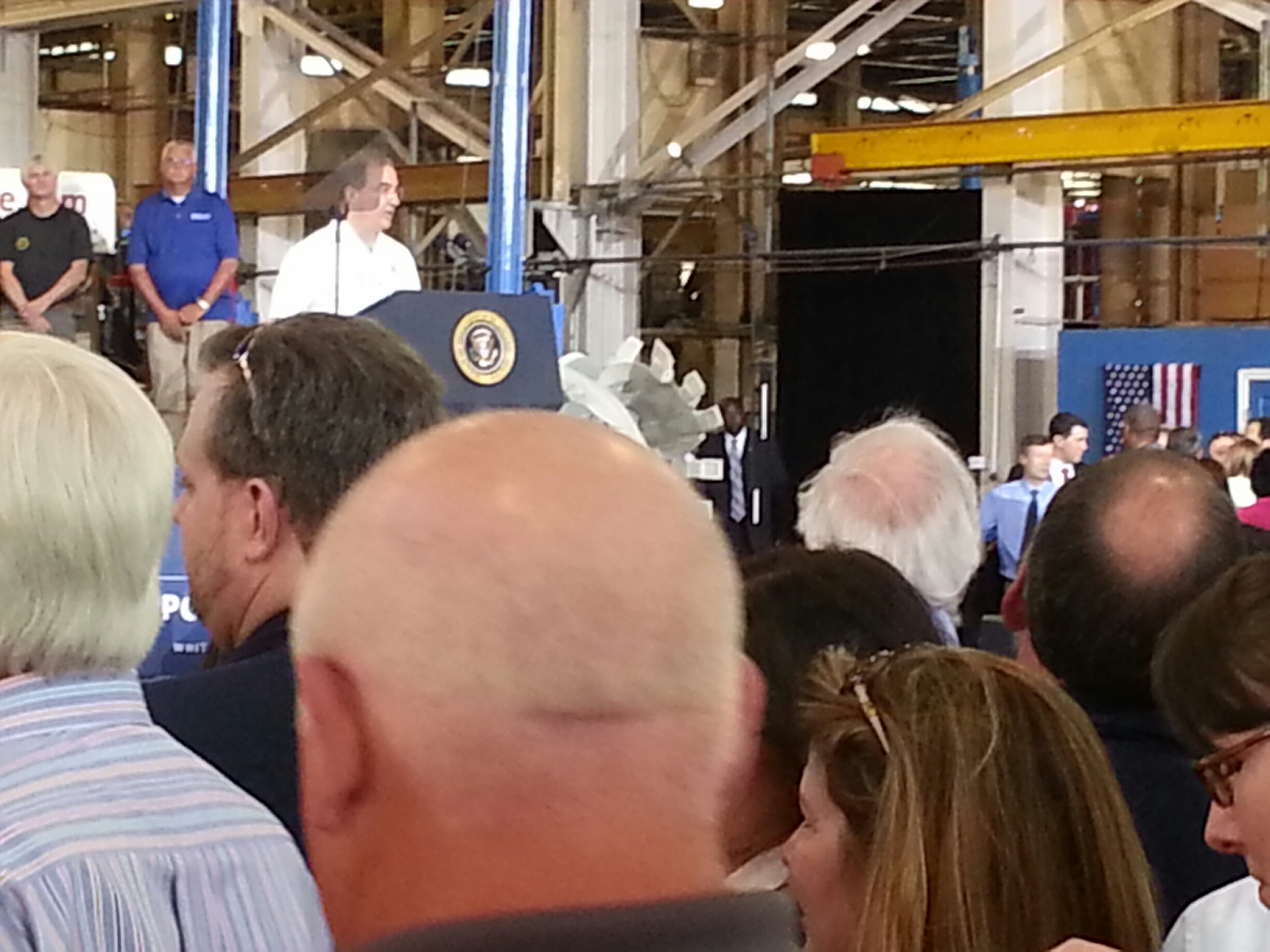 I’m all, “I know that guy!!!”  I know him from Catonsville – he’s heavy into coaching rec and park sports here, and my kids played sports!  Our kids have also gone to school together!  My friend, Tina told me Duncan worked there, but I had no idea he was doing the big, el presidente introduction!  So, then I’m all SCOOP!  SCOOP!  INSIDE TRACK!  And I’m wearing one of those hats with a press ticket stuck in the rim and I’m chomping a cigar and talking like Jimmy Cagney for some reason…

But I get a hold of myself and make a mental note to find Duncan’s e-mail address when I get home.

Then President Obama comes out and does just a STELLAR job with his speech, I have to say.  The guy is a born orator. 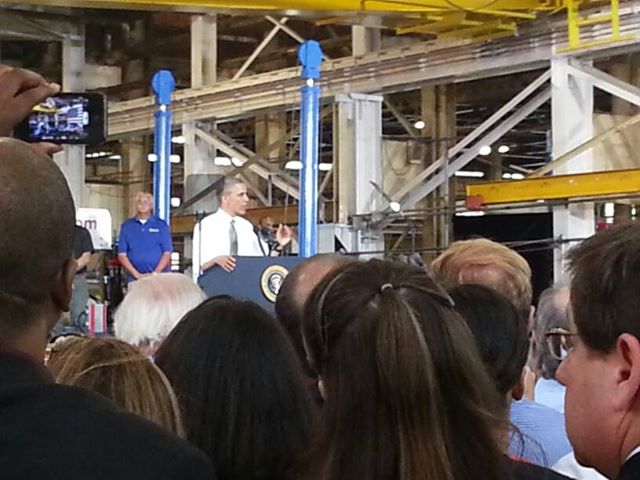 When he’s finished, he does a little bit of this: 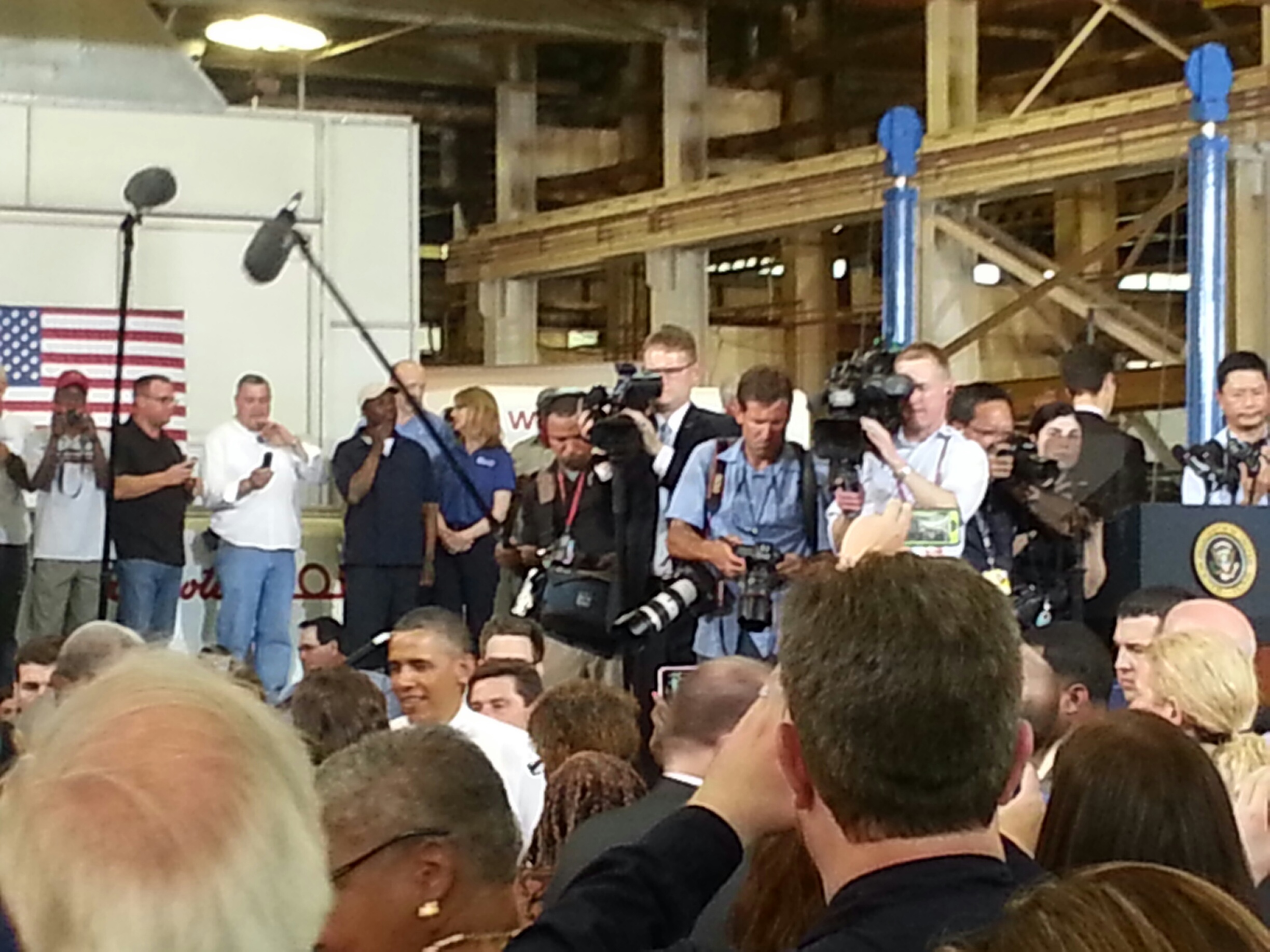 And after the crowd thins out, I visit here again:

And I go home totally excited.  I spoke to Duncan the next morning, and felt like I was talking to a great new friend, and decided that if any of his kids wanted to marry any of my kids that would be fine with me, because there wouldn’t be any arguments about politics at the dinner table.

Anywho, here’s the piece I wrote on The Broad Side, which by the way, is a great politics website.  I’m extremely proud of it, and grateful to Joanne for the opportunity to cover this.  I learned a lot and had so much fun!

p.s.  That was the cleanest port-a-potty I’ve ever used.

May 26, 2013 Silver Bullets? I’d Rather Have Chocolate Ones.
Recent Comments
0 | Leave a Comment
Browse Our Archives
get the latest from
Best of Patheos
Sign up for our newsletter
POPULAR AT PATHEOS Jewish
1