Anti-Semitism – To Ignore or Not To Ignore

Anti-Semitism – To Ignore or Not To Ignore September 24, 2014 Aliza Worthington

When Joan Rivers died a couple of weeks ago, one of my friends wrote a tribute to her on her blog. Up popped an anti-semite in the comments. Still shocking, but no longer surprising. Anyhow, the question of how to react was the topic of some discussion among us friends, and sparked further questions worth exploration. I wrote about what we decided, and when, in general, it’s time to start worrying about assholes like that instead of ignoring them.

I hope you’ll head over to The Broad Side to read it and comment. What would you have done? When would you begin to worry? What sets your alarm bells ringing? 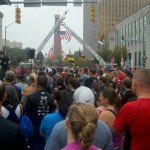 October 2, 2014 Remembering Grandpa
Recent Comments
2 Comments | Leave a Comment
Browse Our Archives
get the latest from
Best of Patheos
Sign up for our newsletter
Related posts from The Worthington Post