Five Factors That Create a Culture of Hate 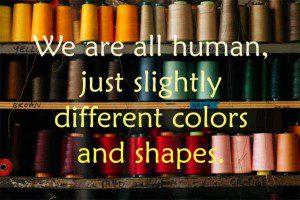 I am not going to do any second-guessing as to background and causation of the tragedy in South Carolina. The facts themselves are horrific enough: a young white man spends some time in worship in a historically black church and then kills nine of them including the pastor.

Somewhere along the line, he learned that hating those who are different is a permissible, possibly even admirable, way to live.

Instead of dealing with what may have or may not have happened in his upbringing, I want to suggest some larger societal factors that I think are coming into play here. Perhaps we can address the roots of the problem, not just chop off more of the visible growth.

It seems to me that there are five primary factors that contribute to our current culture of hate.

1. The fear of those who are different from us is probably programmed deep into our DNA. Fear has promoted survival for most of human existence, or at least promoted survival for the group that feared the most and attacked that which was feared most effectively. The victors passed their fear genes along to us. Until we get to know “the other” on a personal, free give-and-take level, fear remains the primary emotion when encountering the unknown. It can’t be eliminated by logic. Jonathan Haidt’s book, The Righteous Mind: Why Good People are Divided by Politics and Religion, explains this process well.

2. The smaller our boundaries, whether those boundaries are educational, social, religious, financial and/or geographical, the higher the fear of the outsider. A smaller world in any area gives inadequate experience to learn the habits that welcome people outside our own known world. Read stories of those who managed to leave communities with high walls: almost without fail, people who leave will say they were taught that everyone outside their group was evil and out to destroy them. Here’s a short one that describes the system of tight boundaries pretty well.

3. When tight boundaries are reinforced by religious and political leaders, there is nearly always an assumption that God’s favor rests only upon those inside. That assumption makes those on the outside disposable, even less than human. This NPR article helps to expand on that thought. A quotation:

During the Holocaust, Nazis referred to Jews as rats. Hutus involved in the Rwanda genocide called Tutsis cockroaches. Slave owners throughout history considered slaves subhuman animals. In Less Than Human, David Livingstone Smith argues that it’s important to define and describe dehumanization, because it’s what opens the door for cruelty and genocide.

We must never forget the Christian church in our own country did indeed support the idea that slaves were not fully human. In much of the world today, women still carry the stigma of being less than human. Here’s a resource about the world tragedy if you want to know more.

4. When our social and religious institutions routinely segregate us from contact with “the other,” we lower our chances of eliminating prejudice. The “other” can be anyone older or younger, smarter or less gifted academically, more athletically talented as opposed to those of us who seriously can’t walk and chew gum at the same time, the “elite” flyers or those in the crowded back of the plane, the physically fit or the girth-blessed couch potatoes. More and more, we find ourselves and especially our children segregated into “affinity” groups. Such groups increase the likelihood of group cohesion and lower possible friction and discomfort. As a result, we don’t learn tolerance. We are reinforced in our thinking that our way is the only right way.

In my work as a professional church visitor, I notice that larger churches simply do not welcome children or youth in worship. They are sent to their own spaces, with their own kind, with their own age groups. Sure, it makes adults more relaxed in worship and children more entertained by not being in worship. But it also reinforces the message that only what children or youth hear from their peers has any value for their growth–and that is dangerous, to put it mildly.

5. The current culture of picking and choosing our news and other information only from sources that already agree with us has the unfortunate side effect of raising the hate level. Our own prejudices become solidly reinforced. They may become so reinforced that even the idea they are prejudices and not “objectively” true becomes anathema. The awareness of how easily it is to live in a constant state of self-deception simply disappears. For an excellent book on that subject, try Leadership and Self-Deception.  It’s a simple and quick read, full of wisdom.  It also offers practical ways to help us become more aware of the ways we rationalize our own prejudices and our dislike of the “other.”

I offer this list as one possible starting place to address the cultural realities of our increasingly polarized and factionalized world. If each could take one step daily where we lower a barrier and see our own prejudices more clearly, we could indeed make some significant progress.

June 18, 2015
How Megachurches Have Killed the Practice of Prayer
Next Post