My name is “Christy” and I DID march

My name is Christy. And I did march. That other “Christy” gets to stay home because countless other “Christy’s” have been speaking up for women for centuries.

Apparently, a woman named “Christy” posted on Facebook her reasons for not participating or supporting one of the Women’s Marches on January 21. The full text of her explanation is at the bottom of this post. But the essence is stated well in her first paragraph:

Now, the original author of the post has come under fire by many for what looks like her position of white privilege.

Please note: I could not verify the identity of the original author. I found a link to someone on Facebook named Christy Spradlin Lynch where the post was found. However, this person lists no “friends” on FB or any personal information, which makes me think this is a face account. Even so, this post saw multiple reposts. Plus a lot of kickback. The most famous one is here.

I could be this “Christy”

So, let me clarify something: While I am not the “Christy” of the original post, I could very well be.

I am privileged, born a white woman to a solidly upper-middle-class family who valued education highly. I certainly faced limitations when I entered the pastorate, a field where many consider it sinful for a woman to hold that role However, compared to the vast majority of humankind, my life has been a cakewalk. 99% of the limitations I faced were of my making or my choice.

My loving (and Trump-supporting Republican) husband and I enjoy a delightful mutual admiration society. I am rich in family, friends, and financial resources. There is not one reason for me to venture out of this comfortable and cossetted life.

Why is Luke 12 so disturbing? I would suggest you read the entire grouping of events found in Luke 11-13. You’ll find no words of sweetness and light and “Gosh, I hope you will be happy and rich and comfortable all your life because you said the right prayer and are sure you are going to heaven when you die.”

Nope. This section of full of tough stuff, not the least of which is multiple warnings against hypocrisy, against faith for show only, against disrespect toward the Lord God. 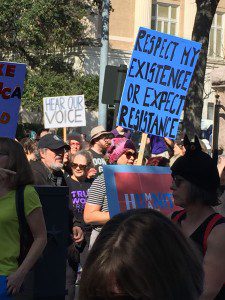 Part of that disrespect includes the ignoring the fact that with privilege comes responsibility.

Faceless and nameless or the people around me?

Now, the other “Christy” listed multiple areas of the world where women have it so much worse than just about anyone in the US. She (he?) suggests concentrating on those injustices. Absolutely–but the truth is, the further the injustice, the less likely any of us will do anything. All the listed examples are out of the US, faceless and nameless.

The people I walked for are not faceless and nameless.

They are dear friends, gay and lesbian, who very well may lose hard-gained basic human rights in the next few years.

They are the hard-working folks at the nail salon who breathe in nasty chemicals all day so I can look well-groomed.

They are the laborers, mostly Hispanic, who fan all over my oh-so-protected neighborhood daily keeping yards impeccable and common areas trimmed and well-groomed.

They are the poor women who are likely to lose what little access they have to health care and birth control and who will then be condemned to lives of perpetual poverty when an unexpected pregnancy pushes them from employment possibilities.

These people and so many more are all around me. I, and you, have a shared responsibility to them.

My name is Christy. And I marched. I will do whatever possible to stand up to oppression and injustice. The other “Christy” gets to stay home and feel good about not supporting others because countless “Christy’s” have been speaking up for women for centuries.

I AM a woman.
I can make my own choices.
I can speak and be heard.
I can VOTE.
I can work if I want.
I control my body.
I can defend myself.
I can defend my family.
There is nothing stopping me to do anything in this world but MYSELF.
I do not blame my circumstances or problems on anything other than my own choices or even that sometimes in life, we don’t always get what we want. I take responsibility for myself.
I am a mother, a daughter, a wife, a sister, a friend. I am not held back in life but only by the walls I choose to not go over which is a personal choice.
Quit blaming.
Take responsibility.
If you want to speak, do so. But do not expect for me, a woman, to take you seriously wearing a pink va-jay-jay hat on your head and screaming profanities and bashing men.
If you have beliefs, and speak to me in a kind manner, I will listen. But do not expect for me to change my beliefs to suit yours. Respect goes both ways.
If you want to impress me, especially in regards to women, then speak on the real injustices and tragedies that affect women in foreign countries that do not that the opportunity or means to have their voices heard.
Saudi Arabia, women can’t drive, no rights and must always be covered.
China and India, infantcide of baby girls.
Afghanistan, unequal education rights.
Democratic Republic of Congo, where rapes are brutal and women are left to die, or HIV infected and left to care for children alone.
Mali, where women can not escape the torture of genital mutilation.
Pakistan, in tribal areas where women are gang raped to pay for men’s crime.
Guatemala, the impoverished female underclass of Guatemala faces domestic violence, rape and the second-highest rate of HIV/AIDS after sub-Saharan Africa. An epidemic of gruesome unsolved murders has left hundreds of women dead, some of their bodies left with hate messages.
And that’s just a few examples.
So when women get together in AMERICA and whine they don’t have equal rights and march in their clean clothes, after eating a hearty breakfast, and it’s like a vacation away that they have paid for to get there…
This WOMAN does not support it. 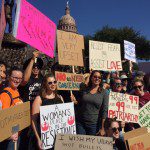 January 22, 2017
Musings on the march: DJT, the people speak
Next Post

January 25, 2017 Help! Does an all-powerful God cause the innocent to suffer?
Recent Comments
11 Comments | Leave a Comment
Browse Our Archives
Follow Us!

I loved Netflix Messiah. You might...
Brad Jersak
Related posts from The Thoughtful Pastor