Why Do Christians Love the Idea of Hell? Part One

I do not think Pearson’s spiritual journey is uncommon. Many have formerly held tight to the idea that God, without compassion, purposes that most of humanity, the creme-de-la-creme of creation, will suffer their afterlives in hell, a conscious, unending torment.

Eventually, they realize that this idea makes no sense. What’s uncommon is how publicly this particular theological move was played out in Pearson’s life and the soundness of the rejection he experienced.

So what is it about hell that makes so many Christians giddy with anticipation?

Do we carry that much animus against our neighbors who are just not quite up to snuff (as we define it) that we need to know with surety that we will not have to see them again in the hereafter?

Do we nurture such a desperate need to control the behavior of others that we need fear to ensure their compliance?

Why must we exclude the majority of humankind, either past or present, from the hope of eternity with God?

The even bigger question: why are Christians terrified of those who don’t believe in hell but still proclaim both Christian faith and biblical justification of their beliefs? Must we cast them from the camp to keep ourselves and our beliefs safe?

All these questions came to mind as I previewed a soon to be released Netflix original called COME SUNDAY, directed by Joshua Marston. Made in conjunction with This American Life, where this story had previously been told, viewers enter a compelling, even mesmerizing, depiction of the fall of Bishop Carlton Pearson, a Tulsa megachurch pastor, and successful, much in demand, traveling evangelist. He had so much to lose, and so little to gain by speaking out his truth.

And this is a true story.

A true story of Pearson’s fractured home life, always subordinate to the never-ending focus on the church.

The true story of his eye-opening moment when he hears God tell him that God will not, absolutely not, send the starving children of Africa to hell for their salvation is safely in God’s hands.

The true story of the pronouncement of his powerful revelation to his church and the shock of his congregation.

The true story of his associate pastor Henry (played by Jason Segel), and founding partner in the church who plants a new church (taking most of the congregation) just a short distance from the current one.

The true story of Pearson’s rejection at the hands of Oral Roberts, his 25-year father in the faith.

Mostly, it is the true story of one man wrestling with God and emerging crippled–and ultimately better.

Underlying Pearson’s own tragic story is the equally tragic story of the treatment of gay men at the hands of these church leaders.

Oral Roberts (so well played by Martin Sheen that viewers could be excused for thinking that Sheen was channeling Roberts) soundly rejected his gay son, Ron, as forever without hope of salvation. Not long after, Ron committed suicide.

Pearson’s music minister, Reggie (played by Lakeith Stanfield), who sticks with Pearson, is a troubled young gay man. He is also sure of an eternity in hell should he act on his inborn nature. Even so, and utterly guilt-ridden, he does find someone to love. And he eventually develops AIDS.

Director Joshua Marston masterfully takes the viewers on Pearson’s inner journey. We watch with his eyes the rapidly emptying church, the increasingly bare parking lot, the confrontation with his former associate, the sad auction of church furnishings that ends with Pearson weeping uncontrollably in the church parking lot–and we weep with him.

I do not think Pearson’s spiritual journey is uncommon. Many have formerly held tight to the idea that God, without compassion, purposes that most of humanity, the creme-de-la-creme of creation, will suffer their afterlives in hell, a conscious, unending torment. Eventually, they realize that this idea makes no sense.

What’s uncommon is how publicly this particular theological move was played out in Pearson’s life and the thoroughness of the rejection he experienced. In one searing scene, we see Pearson’s wife, the former reluctant First Lady transformed into his champion after his conversion to mercy, in the grocery store having a former member pray over her that demons of deception would leave.

Ultimately, Pearson discovers redemption in the midst of ministry to the gay community after he reconciles with the dying Reggie and recognizes his own blindness to grace. It struck me how often it is in the utterly marginalized that we finally hear the gospel.

Netflix will release the film in mid-April. I hope many will watch it. I hope it will open discussion to how beliefs change over time. I also hope it will help us to stop labeling people as heretics, outside hope of salvation. God is bigger than this.

Photo: Screenshot from COME SUNDAY, preview provided to the reviewer by Netflix.

Read Part Two of Why Do Christians Need to Believe in Hell (with special emphasis on the situation within The United Methodist Church). 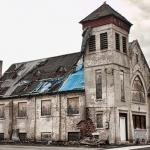 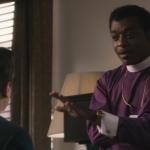 March 5, 2018 Why Do Christians Love the Idea of Hell? Part Two, The UMC
Recent Comments
26 Comments | Leave a Comment
"I don't think this comic book is better than that one😉😉f.2GEOGIPHY.COM/At4834li"
Andref0 Don’t Want Your Kids To Experience ..."
"Bosslar became a grandpa :DT.JIAOFOU.COM.CN/J4834KD"
Temgal Queen Elizabeth: A Model Of Integrity, ..."
"Lies become you"
HolidayBorn What Does The Bible Say About ..."
"I am not reading it anymore mc is only acting like a side character she ..."
Gadsada Religious Beliefs Matter: Stop Stereotyping, Start ..."
Browse Our Archives
Related posts from The Thoughtful Pastor