Something Broke In Me Tonight: “Don’t Be Afraid of Covid”

Something Broke In Me Tonight: “Don’t Be Afraid of Covid” October 5, 2020 Christy Thomas

I admit it: something broke in me, irrevocably broke, after I learned that Mr. Trump, upon his release from the hospital on Monday, tweeted, “Don’t be afraid of Covid.” 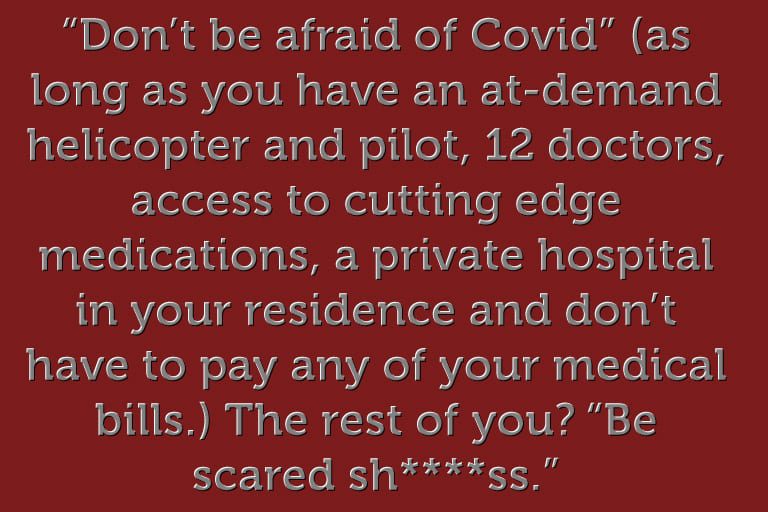 From the newsflash in the October 5 evening online edition of the Washington Post:

President Trump returned to the White House from the hospital on Monday, saying that he had recovered from the novel coronavirus and that people should not be afraid of a disease that has killed more than 209,000 Americans.

I admit it: something broke in me, irrevocably broke, after I learned that Mr. Trump had tweeted, “Don’t be afraid of Covid.”

This man got the best of all the possible best treatments, 100% attention from multiple medical personnel for days, was propped up by a ton of drugs, and won’t face any bills from all this and that is how he responds. This, after around 210,000 people in the US have died and the economic damage to others is so great that many will be plunged into despairing poverty.

I am married to a man of unrelenting honestly and business acumen. I have seen firsthand, looking over his shoulder, what government regulatory overreach can do to decent and profitable businesses. He has, understandably, voted Republican all his life. He will do so again.

I’ve worked hard to appreciate his point of view, his honesty, his willingness to acknowledge that Mr. Trump is not a decent person, but he will still vote for the GOP.

Daily, I read the most Republican of the mainstream press, The Wall Street Journal. I see their weaker and weaker defenses of Mr. Trump along with their unwillingness to abandon the GOP, so they do their best to prop him up and demean Mr. Biden and demonize Ms. Harris, his running mate. I’ve tried to understand.

But something broke in me tonight. No more.

I will continue to love and respect my husband. But I will no longer do my best to understand and appreciate the GOP embrace of this man. The lack of decency and even a shred of human compassion has made Mr. Trump ineligible for any elected office, particularly one where he is expected to have the best interest of EVERY AMERICAN at heart.

I have tried, but something broke in me tonight.

My worst fears about Mr. Trump (rightly) getting Covid have come to pass. He will, assuming his recovery will soon be complete, declare himself invincible, indeed, the Messiah. The One Whom God Has Chosen And Has Eternal Life.

The Religion of Trumpianity will take over. Evangelicals sold their collective souls to this man and have, in the process, destroyed what credibility they had as so-called “People of the Book [i.e., the Bible].”

We have unleashed a monster and I doubt the US–or the world–will ever recover. 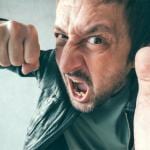 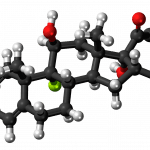 October 7, 2020 Did The President's Doctors Just Put The Entire US In Danger?
Recent Comments
0 | Leave a Comment
Browse Our Archives
get the latest from
The Thoughtful Pastor
Sign up for our newsletter
POPULAR AT PATHEOS Progressive Christian
1

No time to think about what...
slacktivist
Related posts from The Thoughtful Pastor