69% of Russian Orthodox Accept “And the Son” – A Step Towards Unity?

When the East-West Schism happened in 1054, a big issue was that the Pope inserted “and the Son” into the creed. Today, we pray that the Holy Spirit “proceeds from the Father and the Son.” This is sometimes called the Filoque controversy from the Latin word for “And the Son.” A large part of this issue was slightly different connotations of the word we translate “proceed.” In Latin, “and the Son” made a whole lot more sense than in Greek.

A recent survey on this in Russia found that 69% now believe that “and the Son” is right. (Note: I don’t understand Russian. I originally used Google translate then slightly modified it at the suggestion of a redditor.)

In the course of the All-Russian study, Orthodox respondents were asked a question pertaining to the Orthodox understanding of the dogma of the Holy Trinity.

We have been conducting studies of Orthodox religiosity in Russia for a number of years, and our working hypothesis was that most of the respondents would choose the option “I do not know”. But it turned out to be wrong: the respondents did not “find it difficult” when answering the question about Filioque.

69% of Orthodox Russians agreed with the statement that ‘the Holy Spirit proceeds from the Father and from the Son.’ One is inclined to be silent for a minute to grasp this fact in its entirety.

I agree that we need a silent reverence before this reality showing unity of thought.

Right now the biggest issue dividing the two Churches is how we understand the primacy of Peter and Rome. All agree that the Pope has a certain primacy over other bishops, but what primacy is a sticking point.

Let’s pray for Christian unity which looks more like a possibility each day.

P.s. Thanks to “Pater Edmund” on Twitter for making me aware of this.

EDIT: Several people have noted that this may be based on poor catechesis and/or a biased way of asking the question. I had initially considered this not to be the case since the numbers were 69%. I would have expected to give me more of neither or a mix of the two possible answers, not an overwhelming majority for “and the Son.” However, asking the question is a biased way could result in answers like that. Based on this I changed the part of the title about unity to the end and made it a question, not an exclamation. 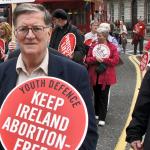 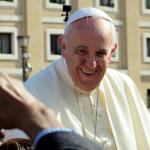 May 15, 2018 Francis’s Ideas for Overcoming a False Dichotomy in Catholic Moral Discussion
Browse Our Archives
get the latest updates from
Through Catholic Lenses
and the Patheos
Catholic
Channel
POPULAR AT PATHEOS Catholic
1