Some people don’t know this, but the Vatican and US bishops are very clear that autistic and other developmentally delayed children can receive Communion. Being autistic is definitely not an obstacle to the Eucharist. Below is a transcript of the video above.

A few weeks that a priest-friend of mine sent me a note from the other side of the country about the struggles a family was having with one of their children who was autistic, who they wanted to have to receive First Communion. And they were having difficulty with it at their parish. Now, we do know that it can be difficult sometimes, because most parents just rely on the regular sacramental preparation and some autistics – who don’t adapt to this neurotypical world too well – really can’t go through the normal sacramental preparation class. It’s just not going to work. I went through all the pretty much normal ones as a kid but I can see a lot of other autistics really struggling with that.

A Right to the Sacraments

One of the important things to remember is that faithful have a right to the sacraments. Mental or developmental disability should only impede it in the most extreme cases for the Eucharist, but given the details that gave me about this kid, I didn’t think that they would have fit in that category.

In the East, they give Communion to babies a few days old when they baptize them as their First Communion, but even still they wait until around the same time we do for their second Communion.

Now I’m just going go through a little bit of why in most cases those who are autistic can receive Communion – first communion and continued – and how practically to bring it about, because it’s not always just as straightforward as other kids.

First of all, Canon 213 of canon law says

The Christian faithful have the right to receive assistance from their pastors out of the spiritual goods of the Church, especially the Word of God and the sacraments.

So, every Christian has a right to the sacraments. We all have a right to receive Communion if we are properly disposed. Obviously, pastors can ensure people are properly disposed and usually, for most people, when they’re in second grade or thereabouts, doing the regular preparation thing for First Holy Communion is a way of making sure they’re disposed, making sure they understand it. But some people just don’t have the intelligence or don’t have the way to communicate outside because they have communication difficulties related with autism, and that’s never been something that’s been an obstacle or negates this right to the sacraments.

Some Sacraments require a certain degree of understanding: for example, if your intellectual disability is such that you really can’t distinguish mortal sins and you can’t have that knowledge, then confession is not necessary because you’re never really going have that third condition of the knowledge. And obviously for ordination, you have to study a whole lot and you have to have all those things. And the same thing for marriage where you have to understand what’s happening in marriage. So, if you… have severe mental disability, it’s going to be tough.

Now the USCCB, the Bishops Conference of the United States, lists some norms on their website. Here’s what the USCCB says:

The criterion for reception of Holy Communion is the same for persons with intellectual and developmental disabilities, as for persons namely the person be able to distinguish the body of Christ from ordinary food, even if this recognition is evidenced through manner, gesture or reverential silence rather than verbally. Cases of doubt should be resolved in favor of the right of the Catholic to receive the sacrament. The existence of a disability is not considered in and of itself as disqualifying a person from receiving Holy Communion.

And this is number 22 in these norms for the sacraments for the disabled. And so there we say that they have to able to distinguish it from ordinary food, from the bread or the chicken fingers or whatever we eat at home; we can distinguish that from Communion. And that’s a pretty low bar, and it just has to be with some kind of sign: whether it’s reverential silence rather just gobbling it down, or those even just a nod or a shake of the head when someone asks you “Is this ordinary food?” or “Is this different from the food we have at home?” or something along those lines.

And the USCCB, the bishops goes so far as to say, “If we’re not sure better to err on the side of giving them Communion.” And so I doubt in most cases that most people even people who are non-verbal, people who really struggle a lot to adapt to this neurotypical world will not be able to meet that bar.

How to Prepare for Communion

Now we move on to the how. Loyola Press has created a simplified sacramental prep book that doesn’t use words, but uses more pictures for those with intellectual disabilities such as Down syndrome, autism, etc. And if you look at it, it looks like a pretty good program for those who struggle that way. For those of us who don’t struggle that way, we can go with an ordinary sacramental prep program, even if due to our autism we might be a little disruptive in an ordinary class, we have to be taught maybe one-on-one by our mom or something like that. That’s a different issue.

On the product page, on the Loyola Press page, it notes, “All baptized persons with disabilities have a right to adequate catechesis, and deserve the means to develop a relationship with God.” And so we see that: we see that right to develop that relationship.

But in reality what might happen is that instead of having it just in this parish, the diocese might say, “Okay, well, we’re going have one person down the diocese for that.” And so if you’re having a struggle with your parish, I highly recommend you call the diocese and talk to the disability ministry or whatever they call it in that diocese, because most larger dioceses and archdioceses have such a ministry. And there, they’ve gone through all that, whereas ordinary pastor might just not know all the details of these type of things, because this is obviously a little bit in the minutia. I didn’t find this right, you know, on the first page of the Catechism or in the regular basic how to run a parish guide for priests or something like that. It is kind of specifically in guides already designed for people with disabilities, so it may not be known by every priest.

I think that we can use that Loyola Press program and I think that almost every kid who’s autistic can receive Communion.

Finally, just one little article on canon law which is from St. John’s University. Just a little quote from that. It says:

Bishops throughout our country have championed the access of mentally disabled persons to the Eucharist. There is no clear pastoral or canonical reasons to deny them sacramental access. With catechesis tailored to them, ususally individually, mentally disabled persons should receive confirmation [not just the Eucharist]. In fact, after baptism every effort should be made to complete the sacraments of initiation.

And that’s an important thing to know: that confirmation the Eucharist along with baptism don’t require a degree of knowledge, don’t require us to have great mental capacity. So, whoever it is, they should be able to receive those sacraments, and I think we can help autistics, help those who struggle with mental disability, by giving them these great graces. 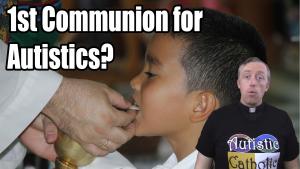 So, hopefully, that helped out anybody who is wondering about whether their kids, or whether somebody they know who is autistic, can receive First Holy Communion. And if you’re really interested in these topics, I really encourage you to subscribe to this channel, cause I keep talking about different topics related to autism and Christianity, autism and Catholicism, autism and spirituality. God bless you!

Note: If you want to support me, please consider sponsoring me on Patreon as I make almost nothing from my online posts. 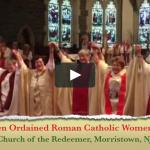 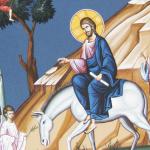 April 11, 2019 Let us Enter into the Passion (Palm Sunday Homily)
Browse Our Archives
Related posts from Through Catholic Lenses