Heathenry worldwide is growing, vibrant, and blossoming. In the broader Pagan and polytheist communities our ideas, beliefs, and lore are becoming more well-known, widespread, and accepted. Broader society and popular culture, much as it saw a rise in interest in witchcraft and Wicca during the mid to late 1990s, is seeing Vikings, Norse Gods, tales of mythic struggle against impossible odds, and polytheism on the rise. Everywhere our community is growing, surging forward, and with endless horizons ahead and fair winds at our backs. Yet just out of sight a tide of bigotry lurks in the deep, tainting and tarnishing the reputation of Heathens worldwide. Every time it roars into wider view the reputation of all Heathens is tarnished as the actions of a bare handful stain the honor of all. 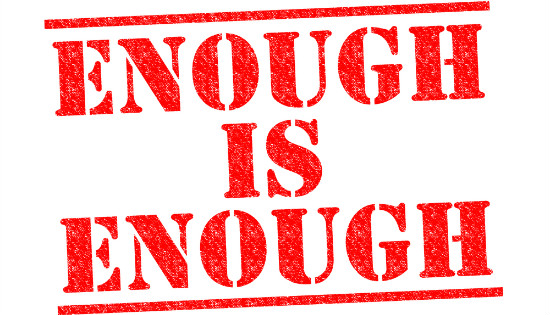 In the past week this growing wave has crested higher and more brazenly than ever. On Sunday, January 10th Stephen McNallen, the leader for life of the Asatru Folk Assembly, responded to the mass sexual assaults on New Years’ Eve in Cologne by calling for Germany to bring back the Freikorps:

When he faced outraged responses from across the Internet denouncing him for advocating a resurrection of the violent, reactionary paramilitaries who formed the backbone of the Nazi Party’s Sturmbateilung militia and were responsible for the murder of thousands of innocent Jews, Lithuanians, Poles, and many others deemed guilty of the crime of not being the right kind of German McNallen doubled down on his words, issuing the following statement on Facebook and through Joseph Bloch: 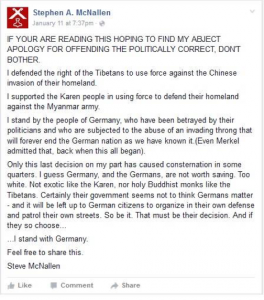 If this was a first-time action or statement from these men one could understand the calls from his apologists and defenders for patience, education, and finding ways to foster understanding. After all if someone is standing too close to the edge of a cliff the best thing to do is talk them down. Taking direct, harsh action as some would argue is only likely to push someone who is already in a precarious position but leaning in a particular direction to jump without any reservation. When it comes to both of these men that is most definitely not the case.

Both share a long, well-documented history of thinly veiled bigoted pronouncements. Their hatred for Muslims, disdain for any who advocate for inclusive practice, and open support for racialist causes and groups is common, public knowledge. McNallen’s own words are notorious and widespread, ranging from Metagenetics, the defining document of racialist spirituality, to claims that Mexican and Central American immigration is an organized invasion of the American West and his thinly veiled peddling of white genocide conspiracy theories through the AFA’s website.

Bloch, similarly, has a history of Islamophobic statements, open disdain and contempt for Black Americans, and panicked fear-mongering that federal legalization of gay marriage would mean exclusionary groups like the AFA would be forced by the federal government to allow non-white people to participate in the AFA’s religious rituals. The simple truth is these words are not coming from a vacuum or emerging from the mouths of the misinformed. These individuals have been hunting with their noses to the wind and blood on their minds for years.

What further confirms this conclusion is their own responses to this specific situation. McNallen’s own words show a clear lack of remorse and a transparent attempt to shift the discussion away from what he called for. Beginning with his bold pronouncement, “IF YOU ARE READING THIS HOPING TO FIND MY ABJECT APOLOGY FOR OFFENDING THE POLITICALLY CORRECT DON’T BOTHER” he made it abundantly clear he is not backing down from his position. His citing of work in relation to the Tibetan and Karen peoples is a painfully transparent dodge reeking of deliberate misdirection.

In essence he is claiming immunity to any condemnation of his present deeds by invoking his past deeds, ignoring the fact that mass refugee migration is nothing like an armed military occupation or that introducing bloodthirsty gangs of unaccountable killers into an already volatile situation would make things substantially worse for everyone. The cherry on this particular sundae is McNallen’s homogenizing an entire continent with his statement “Europe is ONE”, the “He shouldn’t have gotten involved in German affairs” quip, and his embrace of the infamous blood and soil doctrine: 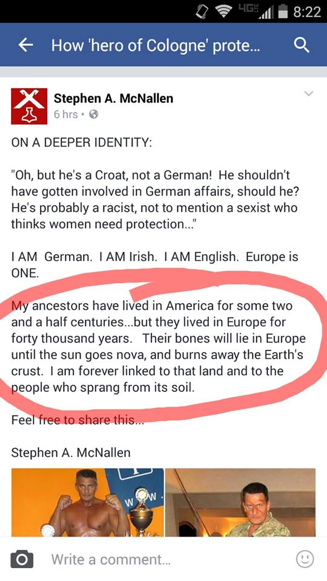 Bloch has provided his uncritical support for McNallen’s actions. Beginning with dismissing the very legitimate concerns of Heathens denouncing his irresponsible and spectacularly incendiary statement as little more than “hysteria” he’s doubled down on the sentiments behind such words. This begins with his open admission that, for him, it is all about being white. He follows by arguing the refugees fleeing the war-torn charnel house that is Syria are, in fact, invaders coming to destroy Europe. Left unsaid is how this current mass flight is the furthest thing from what anyone would call an invasion seeing as the refugees are unarmed, terrified, starving, and anything but an organized fighting force. He finishes his ode to white pride with, “We conquered and civilized the whole world.”

Clearly these men are not misinformed individuals. These words are all part of a consistent pattern of blatant support for white power, Jim Crow spirituality, and overt racism. They have knowingly charted this course, fixed their sails, and for good measure nailed their colors to the proverbial mast. McNallen’s decision to use Bloch, given Bloch’s documented history of racist, bigoted statements and blatant fear-mongering, only reinforces this inescapable conclusion. After all why would the leader of a Heathen organization use a man with such nakedly obvious sympathies as his mouthpiece unless he, on some critical level, agreed with him?

Even though the vast majority of the Heathen community is not part of the AFA or looks to McNallen as their Asapope this does not exempt him from criticism. Like it or not his words reflect on the whole of the Heathen community. His position, the support he receives from high officers in other Heathen organizations, and his long-time association with Asatru and Heathenry in the public eye means whenever he or his followers spew forth more bigoted bile into the public sphere outsiders will assume they represent us. When Heathens excuse, dismiss, or brush aside his comments by invoking his reputation or using a handful of his past good deeds to distract from his far more numerous deplorable present deeds they reinforce the untrue yet widely held assumption that Heathenry actively shelters and supports racism, neo-Naziism, and organized bigotry.

It does not need to be this way. Heathens such as Josh W., the founder of the Heathen Talk podcast and website, are standing up and speaking out. We are a growing community with more kindreds, blotlagr, and hearths springing up every day across the planet. If we wish to continue this hopeful and highly positive trajectory of sustainable community, virtuous conduct, and increasingly deep and insightful spiritual thought then we must take a stand against those who would twist everything we hold dear into a platform for organized hate. If we do not act decisively now while this problem is still somewhat manageable then we are condemning those who come after us to even greater obstacles, foes, and challenges. 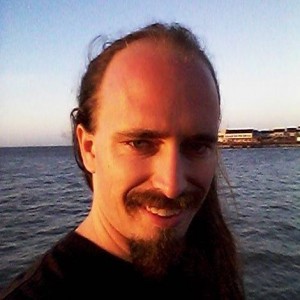 Ryan Smith is a Heathen devoted to Odin living in the San Francisco Bay Area. He is the co-founder of Heathens United Against Racism, a founding member of Golden Gate Kindred, is active in the environmental justice and anti-police brutality movements, and recently completed his Masters in modern Middle East History and economics. 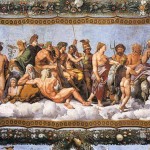 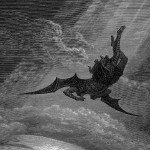 January 21, 2016 The Alchemy of Activism: The Satanic Temple
Browse Our Archives
Related posts from Through the Grapevine 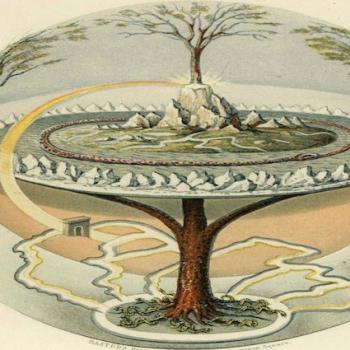 A sweat lodge in Snowmass with Wallace Black...
It was the day before Thanksgiving 27 years ago and I was...
view all Pagan blogs