The Book of Baba Yaga

About 4 years ago, I took a break from being a man. Even though I’ve always felt a strong affinity for the societally defined trappings of masculinity, the labels “man” and “male” suddenly felt like clothes that no longer fit. I experienced a strong need to add what our culture deems “feminine” elements to my everyday presentation—makeup, nail polish, bright and colorful clothes, etc. Yet I definitely didn’t feel like a woman either. When I heard the term “genderqueer,” I strongly identified with it.

Around the same time, an old friend texted me an ad for “Baba Beer.” “Baba” for us referred to an Alanis Morissette song. “Look!” he wrote jokingly, “Alanis has her own beer!” Yet as I read his message, I wasn’t thinking about Alanis. I was thinking about Baba Yaga.

Baba Yaga is a witch/earth goddess from Russian folklore. She lives deep in the forest in a house on chicken legs. Rather than the more traditional broomstick, she flies in a mortar, using the accompanying pestle to steer. She’s a dangerous and wonderful figure who tests the wit and mettle of anyone who approaches her hut seeking help. She may grant you the tools necessary to succeed in your quest, or she may eat you.

I have no idea why I thought of Baba Yaga. I wasn’t a Pagan yet. I loved myths and fairy tales, but I was only vaguely aware of her story. Still, after getting that text, her name stayed with me. I had been looking for a new focus for my next poetry book, and the phrase “The Book of Baba Yaga” kept appearing in my head.

So I read the folktales associated with her and began writing poems. She proved to be an excellent metaphor. Versed in arcane knowledge yet deeply rooted in the earth, vicious yet oddly maternal, I explored the various facets of her character. I didn’t really think of her as anything other than a mythological figure, a darker version of the Wise Woman archetype. It wouldn’t take long for me to realize that Baba Yaga is quite real, and she was, as one friend put it, stirring me in her mortar.

Not long after I started writing the book, I began to go through a lot of personal troubles. For a variety of reasons, my until then manageable anxiety and depression became unmanageable. I started having panic attacks which would cause me to hyperventilate and wail. Literally, I would wail. It reminded me of those ponderous Biblical descriptions of hell as a place where there is “much wailing and gnashing of teeth.” Later I would realize in therapy that I was, almost two decades after the fact, grieving years of childhood abuse.

The force of my reaction frightened me as much as the attacks themselves. It made me feel irrevocably broken and, for some reason, completely unlovable. Desperate for relief, I started meditating.

In meditation, I became aware of the energies that surround us. I realized I could subtly manipulate these energies in playful ways—e.g., bouncing a luminescent ball between my hands. It brought me back to high school and my few tentative attempts at practicing witchcraft. If what I was doing in meditation was a form of magick, maybe it could help me heal myself.

Not surprisingly, all these new developments began to appear in my writing. Mental health, gender identity, magick…as I continued to work on “The Book of Baba Yaga,” I realized that for me she stood at the nexus of these things. As a monstrous witch/benevolent wise woman who dwells in the heart of the dark forest, she’s an ideal emissary of the subconscious mind where pain coexists with potential. Furthermore, her strong association with the divine feminine can compel a man to explore his own relationship with femininity.

But how does one define femininity? We live in an era where many are rightly questioning what it means to be a woman or a man, or if these categories even truly exist. In keeping with this perspective, I did not experience the divine feminine as qualities stereotypically associated with women (empathy, intuition, tenderness, etc.). Instead, being a man under the magickal influence of a strong female deity taught me how to embrace in-betweenness. I began to better understand my motives for wearing make-up and nail polish. Although these are not inherently “woman things”—and Baba Yaga herself is certainly not the make-up and nail polish type—they are common symbols of femininity in the 21st century West. Not only that, but they were accoutrements that appealed to me personally. And by adopting them while simultaneously retaining my shaved head and beard, I was working through and proudly making visible to others my complex and contradictory nature as a human being. Baba Yaga was shaking me out of my worldview and refusing to replace my old certainties with new ones.

Integrating these lessons and writing a book about it empowered me. It was this sense of power—along with therapy, medication, and the love of a good husband—that helped me learn how to manage my mental health. I still deal with anxiety and depression, but I no longer have the panic attacks. Things that used to trigger me in the day-to-day have also lost much of their bite. I feel more centered and more myself than ever before.

I think now about Baba Yaga’s destructive aspect—that of the witch who swallows you whole. I’ve come to believe that the emotional challenges I went through were a manifestation of this. My wounded inner child needed to be devoured by the goddess-witch so I could be reborn as a truer version of myself.

Interestingly, I’ve stopped wearing makeup and no longer identify as genderqueer. I suspect it’s because Baba Yaga has withdrawn now that I’ve found my path. Having internalized her lessons, I no longer feel drawn to the tools—for now. I’ve circled back to identifying as a cisgender man with the understanding that gender remains fluid and mercurial.

One final note—“The Book of Baba Yaga” has been retitled Divining Bones, and will be published by Sundress Publications in early 2019. You can probably guess who it will be dedicated to.

About Charlie Bondhus
Charlie Bondhus's work has appeared in Poetry, The Missouri Review, Columbia Journal, Hayden's Ferry, The Bellevue Literary Review, and Copper Nickel. His second book "All the Heat We Could Carry" won the Thom Gunn Award for Gay Poetry. He’s a practicing Pagan with no particular affiliation. He teaches English at Raritan Valley Community College and lives in Asbury Park, NJ. More at You can read more about the author here.
Previous Post 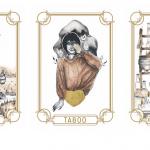 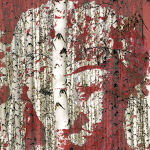 August 19, 2018 Divining Bones
Browse Our Archives
Related posts from Through the Grapevine