Rise of the Planet of the Apes

Rise of the Planet of the Apes August 8, 2011 Rebecca Cusey 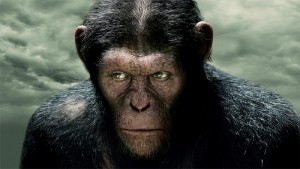 When a movie universe has been well-trod, as in the “Planet of the Apes” franchise spanning at least six movies and countless TV programs,  it’s hard to believe anything new will measure up to the glories that have come before. George Lucas learned this the hard way, with his Star Wars prequels, as have any number of comic book superhero reboots. That’s why the awkwardly titled “Rise of the Planet of the Apes” is such a fantastic movie. It respects and builds upon all that has come before even as it creates its own powerful presence.

In present day San Francisco, Will Rodman (James Franco) toils away in one of those shiny, hi-tech medical labs that are all the rage in movies. He studies brain regeneration and intelligence enhancement, injecting chimpanzees with his experimental drugs. For Will, the research is not merely academic. He is slowly losing his father, played with touching pathos by John Lithgow, to the confusion and frustration of Alzheimer’s disease.

When his efforts succeed and, at the same time, go terribly wrong, all that remains is a newborn chimp. Will smuggles it home and his father, in a burst of lucidity, dubs him Caesar after the play by Shakespeare. The baby grows and becomes part of the family, somewhere between beloved pet and adored child. As Will teaches him sign language, Caesar demonstrates abnormal intelligence and human level understanding.

However, Caesar’s very animal response to a threat to the family lands him in an ape house, a simian prison of small cells and mistreatment. There, like an animal Nelson Mandela or Aung San Suu Kyi, he realizes justice will only come when apes unite.

This is Caesar’s movie. The human actors perform well, but they are only backdrop to the animal coming into self-awareness and knowledge of the world. Andy Serkis, the most famous actor you’ve never seen, brings Caesar to life through motion capture technology. Serkis also played Gollum in “The Lord of the Rings” trilogy and Kong in 2005’s “King Kong,” but the technology has come a long way since then. It now captures near-human levels of emotion in Caesar’s eyes and the smallest nuance of despair or anger in his body language.

The role is almost all body language and Serkis pulls it off amazingly, even more so that he doesn’t anthropomorphise the chimp. Caesar hoots, fights, runs, swings, connects, laughs, and emotes like an ape, not a man in  a monkey suit. He is an ape who knows himself, but an ape nonetheless.

With a posse of other chimps, a few orang-utans, and a silverback gorilla thrown in for good measure, the simian army becomes a force to fear. The movie spares no effort on effects. The animals take on the San Francisco police and the Golden Gate Bridge with edge-of-the-seat excitement. It includes a few winks to other “Apes” films, including the best re-use of a famous line I’ve ever seen. The film is rated PG-13 for intense action. It has no sexuality or profanity. It is entirely appropriate for children and teens who can handle fast paced action.

But it is the quiet moments that give the movie its power. Early in the movie, Caesar asks Will through sign language where he came from. When Will drives him by the lab and answers his questions honestly, Caesar not only understands his mother’s death, but asks the most human of questions: What am I?

This self-knowing is one of the main things that separate man from the animals. Even a baby human will rub dirt from his face in a mirror, something animals never understand. They don’t recognize the image as being themselves. When Caesar comes into awareness of himself, he inherits all the glories and trials of mankind: thirst for freedom, quest for meaning, hunger for truth, a sense of right and wrong.

For this reason, the audience completely relates to Caesar as he takes us on a ride to discover what freedom and meaning he can find in the world in which he finds himself. I was completely caught up in the story. Judging from the gasps and applause from the audience, they were as well.

It all adds up to an excellent movie, one that deserves the moniker “epic.” It ranks in the top three of the year so far. July was all about Harry Potter and his wizards, the rest of the summer belongs to the apes.

September 9, 2011 'Contagion' is Icky but Fun
Browse Our Archives
get the latest from
Family
Sign up for our newsletter
POPULAR AT PATHEOS Family
1