Review: ‘The Dictator’ Bravely Offends One and All

Review: ‘The Dictator’ Bravely Offends One and All May 11, 2012 Rebecca Cusey 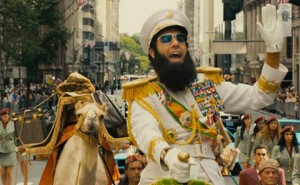 You can say this for Sacha Baron Cohen: he’s never been a coward.

His fearlessness in his latest work, The Dictator (opening Wednesday, May 16), is by far its greatest strength. He raises issues no one else touches and proclaims a passionate love song to democracy that would make George W. Bush proud. Fearlessness is also its greatest weakness as he takes the viewer down scatological roads that require no exploration.

Unlike Cohen’s prior films Bruno and Borat: Cultural Learnings of America for Make Benefit Glorious Nation of Kazakhstan, The Dictator has no ambush interviews nor pretend characters interacting with unsuspecting real people. Everyone in the film is an actor.

If you can call it acting.

Acting is about the level of a good Saturday Night Live sketch, the writing ad-hoc, the plot iffy, and the filming haphazard. There are scenes in which you wonder where the lookout sat while the crew ran into an unattended warehouse, hoping to finish the scene before being found by the night watchman.

The convoluted story follows Admiral General Aladeen (Cohen), the dictator of a fictional North African country called Wadyia, rich in oil wealth but cursed with Aladeen. He’s the kind of megalomaniac who stages his own Olympics and wins every event, who remakes Hollywood blockbusters with himself as the star, who insists nuclear bombs be pointy because they are scarier that way. The pesky UN starts making a fuss about his nuclear program, which even Aladeen can’t claim is for peaceful purposes with a straight face. Off to New York to appease the do-gooders, he’s betrayed and finds himself just another penniless immigrant in the Big Apple.

His quest to reclaim his country collides with his growing affection for an unshaven neo-hippy named Zoe (Anna Farris), not always in ways that make sense.

None of the lack of professionalism really matters, at least not much, because Sacha Baron Cohen isn’t about trivial details like “good acting” and “plot progression” and “production values.”

Anyone can do that.

He’s about saying what nobody else is saying.  In a world in which regular reports come of attempted terrorism on American soil and actual terrorism overseas by radical elements of the Islamic faith, Hollywood tiptoes around Muslims in general and Muslim villains in particular.

Sacha Baron Cohen doesn’t give a fig if you –or the entire Middle East – are offended, just as he had no problem with selling the nation of Kazakhstan down the river.

Except he’d say it in much more colorful language.

As Aladeen, he continually “goes there,” offering to throw a newborn baby girl into a trash can because girls are worthless, comparing educated women to trained animals, ordering assassinations for questioning him.

Much funnier, but equally intrinsic to earning the R rating, are the scenes which show Aladeen and a Chinese diplomat paying large sums of money to minor starlets for sexual favors (such as Megan Fox in what I suppose we must credit as a good natured role).

Because of this fearlessness, the movie is downright hilarious most of the time.

The Dictator nods in both plot and tone to Charlie Chaplin’s 1940 The Great Dictator, in which the great comedian lampooned Hitler. When Chaplain’s film was in production, America and England still desired to appease the German Dictator. England even planned to ban the film from being shown, but history moved quickly and the nation was at war by the movie’s release. Chaplin, as a comic, said by mockery what politicians could not and would not say: that Hitler was a madman bent on world domination.

Cohen makes similar points about Middle Eastern sheiks and rulers. His critique is remarkably non-religious. The word “Allah” is not spoken in the film. No one prays or attends mosque, there is no discussion of sharia law or religious restrictions on women. His beef is with the Arab culture and with the corruption of power and wealth, not with Islam.

These kinds of distinctions, however, tend to be missed by fundamentalists of all stripes.

It must be said, Cohen is Jewish and spent a year on a kibbutz in Israel.

Nor does Cohen only lampoon Muslims. Laughably progressive do-gooders and bigoted xenophobic Americans also receive his ire. His final speech will be a rallying call for liberals, as he satirically points out perceived flaws with America, including that old boogyman the one percent, racial profiling, and supposedly stolen elections.

Yet, it ends with a triumphant and passionate statement of love to democracy, a message that, yes indeed, self-determination and civil rights are better than other ways of ruling and being ruled.

Where do we hear that in PC America anymore?

For all its left-leaning and R-rated content, the final product echoes George W Bush: Freedom is the right of every human being.

For that kind of courage, Sacha Baron Cohen should be commended.

Perhaps the rest of Hollywood can find some courage in his bravery as well. After all, it’s very sad when people have rights – including freedom of speech – but are too timid to use them. 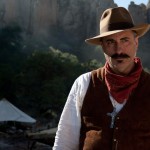 May 11, 2012
Trailer: 'For Greater Glory' Andy Garcia and the fight for religious liberty
Next Post 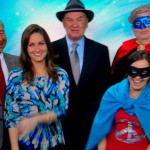 May 14, 2012 Rebecca as 'Karma Girl' on the Arch Campbell Show
Recent Comments
11 Comments | Leave a Comment
Browse Our Archives
get the latest from
Family
Sign up for our newsletter
POPULAR AT PATHEOS Family
1

11 responses to “Review: ‘The Dictator’ Bravely Offends One and All”