Drunk in the Spirit in the House of Wine

Drunk in the Spirit in the House of Wine September 23, 2015 Brandon Mark Showalter 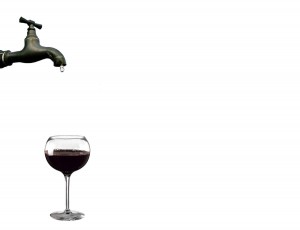 Suppose you take a flight to Paris and as you traipse through Charles de Gaulle airport you notice several groups of people speaking in different languages. It is a likely scenario in such an international setting. Might you point at those people and say “Hey, look at that bunch of drunks over there.” You would not? How interesting. As far as I can tell, that is the scene in Jerusalem during Shavuot in Acts 2.

For those of you who follow the church calendar, we are just over halfway through the season of Pentecost and before you know it we will be posting Advent calendars. Pentecost, meaning fiftieth, occurred fifty days after the Resurrection, and the Feast of Weeks entailed people coming from all over to bring in their offerings from harvest. That the Holy Spirit was sent during this Feast was no coincidence. Textually connected in the Bible to the Shavuot is the season of the grain harvest, specifically of the wheat, in Israel. This season lasted seven weeks and it was a time of gladness.

But I digress. Back to the scene in Acts 2. Why would anyone suspect people of being intoxicated at 9 ‘o clock in the morning unless there was something else going on other than hearing them speak in other languages? What do drunk people look and act like? It is not a stretch to infer that something else must be going on though we don’t know exactly because the Bible does not say. I will just say that I have observed that most people who are drunk usually have trouble walking and they tend to laugh a lot.

It seems that the presence of God has the same effect on the human person as…wait for it…alcohol.

Are you offended yet? The very idea of feeling intoxicated by God, especially in church, is enough send religious people into apoplexy. Any Christian who has walked with God for any length of time probably has a story or two of Him intervening powerfully; these are memorable instances when his presence marks ones life. Perhaps you are one who senses the Holy Spirit in a tangible way, or maybe you hear that still small voice of the Lord while meditating on Scripture. Whatever the case, He shows up, his presence manifests. What, then, of these particular manifestations, those which onlookers likened to drunkenness?

To begin, let us dissect the word “manifestation.” When broken down to its roots,  we have “manus” which means hand, and “festus,” which means a festival, party, or dance. Referring to a “manifestation” of God, then, would mean that God’s “hand” is “dancing.” God’s hand moves as He wills it to move and this would serve to explain the phenomena of some people in a meeting, albeit probably a charismatic one, receiving something from the Holy Spirit and manifesting physically, perhaps with tears or exuberant joy, while others are not feeling or experiencing much of anything at all. (For you church historians out there, think of the documentations of ‘fainting’ in Jonathan Edward’s meetings in the Great Awakening.) The “dancing hand” of God may do some awkward things but last time I checked, awkward is pretty subjective. God can move however he pleases and he just might cause an axhead to float, speak through a donkey or burning bush, ask a prophet to cook his food over human excrement, and spit in the dirt and wipe the newly-made mud on a blind man’s eyes to heal him.

So as God’s hand moves and ministers to people in unique ways, one persons experience with him is uniquely his or her own and it is not to be measured against the experience of another. And yet, this particular manifestation of God’s presence, that of intoxication like what occurred in the second chapter of Acts, has been the subject of much controversy because it can appear so carnal and improper. Yet wine was a part of nearly every Jewish festivity, so consider the following manifestations where biblical characters spoke of the presence of God and wine in the same breath.

Remember when God brings you to his “banqueting table” and his banner over you is love (Song of Solomon 2:4)?  That is what it says in the KJV, NIV, NASB, and ESV. The actual Hebrew is bayith yayin (transliteration). It does not mean banqueting hall, but is literally house (bayith) of wine (yayin). These terms are used 138 times in Scripture and only in this instance is it translated “banqueting hall.” Just to be sure, I checked the Septuagint, and the the Greek says “house of wine” there too. This is no carry-in potluck where parishioners eat casseroles in a dank church basement. This is God’s wine cellar where he takes his beloved.

Or consider Jeremiah 23:9: Concerning the prophets: My heart is broken within me; all my bones tremble. I am like a drunken man, like a strong man overcome by wine, because of the LORD and his holy words (my italics). That is Jeremiah’s own description of his experience, not that of a Pentecostal evangelist.

Then there is Hannah in 1 Samuel 1: 12-17. She was speaking in her heart, only her lips were moving, but her voice was not heard. So Eli thought she was drunk. Then Eli said to her, “How long will you make yourself drunk? Put away your wine from you”  (my italics again). Maybe Eli was just senile and old, but is it at least a possibility that she was overwhelmed by his presence as she interceded and that he thought she was inebriated because she was, to borrow some charismatic lingo, drunk in the Spirit?

And how can we forget the wedding at Cana, where Christ performed his first miracle. With no disrespect intended to my friends whose sincere convictions do not permit them to drink, is it not a bit ironic given the subject we are discussing that the Lord started his ministry by turning water into a substance that makes people tipsy? Especially after the guests had already been drinking, reveling in a little gladness of heart? Might there be more to presence of Jesus than we think?

If you have ever been to a Pentecostal and/or charismatic church you might encounter some fleshly silliness, distracting emotionalism, and in some cases, an unfortunate disregard for the Bible. You might also encounter miraculous power, genuine expression of heartfelt emotions in worship, and doctrinally sound teaching. To me, Christianity Today’s recent article on the mainstreaming of Pentecostalism indicates that more and more people are asking questions and are genuinely curious about an expression of the Christian faith once viewed with disdain and deep suspicion. Despite the denunciations of several prominent evangelical leaders and the outlandish practices of notorious charismatic televangelists, consider also that Pentecostalism is by far the largest spiritual movement in the world and has made significant inroads in most denominations. After Eucharist each week at my Anglican parish we thank God for feeding us with the bread and wine (God bless you, Welch family, but we use port) and declare that we will serve him “with gladness and singleness of heart.” And if I do say so myself, it is a teensy-weensy bit easier to say that after encountering his presence in the wine there at the altar.

When God pours out his Spirit, people sometimes act as though they have had too much wine because his touch is enough to undo a man and cause him to feel drunk by his presence.  But unlike when one consumes excessive amounts of actual alcohol, there’s no vomiting or splitting headache the next morning with the Holy Ghost.

We cannot possibly have too much of Him. He makes that bit in the Westminster Catechism about glorifying God and enjoying Him forever, shall I say, intoxicatingly pleasant. 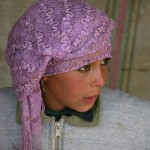 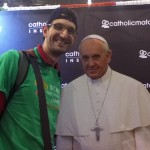 September 25, 2015 What a Fake Photo of Pope Francis and Me Taught Me About Him
Recent Comments
3 Comments | Leave a Comment
Browse Our Archives
get the latest from
Evangelical
Sign up for our newsletter
POPULAR AT PATHEOS Evangelical
1 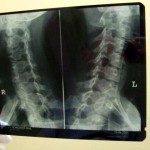 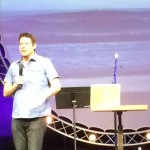 Evangelical
UPDATE! Kickstarter for Documentary Film About Science and...
Tip of the Spear
TRENDING AT PATHEOS Evangelical