Peace on Earth? Is Misogyny Ever Innocent?

Patheos Explore the world's faith through different perspectives on religion and spirituality! Patheos has the views of the prevalent religions and spiritualities of the world.
There is a certain Christmas photo that has gone viral on the internet. This photo shows a family of five nestled between two rows of Christmas trees on a Christmas tree farm. The mother is in the center with her two daughters at her side and her husband and young son kneel and stand just behind the women/girls. The husband/father holds a sign that reads “Peace on Earth.” In many ways, it’s a typical Christmas family photo, except that the mother and the two daughters have been bound with Christmas tree lights and gagged with duck tape. And that’s a pretty big exception. For copyright reasons, I can’t post it but you can find it here. You should really go take a look at it.

Let me say right off the bat – I don’t know this family or the photographer. I do not know why they would choose this pose or what their thinking was when they decided to bind and gag the women in the family while the father and son smile placidly giving a “thumbs-up.” And, quite frankly, I don’t really care.

What I do care about is the image itself and why anyone might find it either funny or clever. Any image placed on the internet moves outside of our capacity to control and enters into a common cultural space. A space marked by a history and tradition of misogyny and abuse of women. It is that history in which this photo has been viewed and read as a viral sensation across the internet.

Given that this is purported to be a photo for a Christmas card and the sign the father is holding reads “Peace on earth,” it seems reasonable to assume that this family is Christian. The fact that Christian history and tradition have neither been champions of women’s rights or even women’s dignity is important context for “reading” this photo.

Here are some of the more choice things that Christian theologians have had to say that bear on the image presented in this photo.

Clement of Alexandria (Theologian and Greek Father, 2nd century): “Every woman should be filled with shame by the thought that she is a woman…the consciousness of their own nature must evoke feelings of shame.”

Origen (Theologian and Greek Father, 2nd-3rd centuries) “Men should not sit and listen to a woman… even if she says admirable things, or even saintly things, that is of little consequence, since it came from the mouth of a woman.”

Tertullian (the Father of Latin Christianity, 2nd-3rd centuries): “In pain shall you bring forth children, woman, and you shall turn to your husband and he shall rule over you.”

Chrysostom (Archbishop of Constantinople and Doctor of the Church, 4th century) “God maintained the order of each sex by dividing the business of life into two parts, and assigned the more necessary and beneficial aspects to the man and the less important, inferior matter to the woman.”

Jerome (Priest, Theologian, Doctor of the Church and Latin Father, 4th-5th centuries): “Woman is the root of all evil.”

Augustine (Bishop of Hippo, Doctor of the Church and Latin Father, 4th-5th centuries): “I don’t see what sort of help woman was created to provide man with, if one excludes procreation. If woman is not given to man for help in bearing children, for what help could she be?

Martin Luther (German priest, theologian and Protestant Reformer, 16th century) : “The word and works of God is quite clear, that women were made either to be wives or prostitutes.”

John Dod (Puritan clergyman, 15th-16th century): “And first, the wife must fear her husband, as is commanded in Eph. 5:33. Let the wife see that she fear her husband. . . The second duty of the wife is constant obedience and subjection.”

John Wesley (founder of Methodism, 18th century): “Do not any longer contend for mastery, for power, money, or praise. Be content to be a private, insignificant person, known and loved by God and me. . . .  of what importance is your character to mankind, if you was buried just now Or if you had never lived, what loss would it be to the cause of God.” (note that this was written in a letter to his wife)

And lest, dear readers, you think that this misogyny is a thing of the Christian past and not the present, misogyny is alive and thriving in conservative and fundamentalist versions of Christianity where the idea of “gender complementarity” is the newest twist on sacralizing gender disparities and continuing to keep women “in their place.”  Here are a couple more recent gems:

Southern Baptist Convention statement (summer 1998): “A wife is to submit graciously to the servant leadership of her husband, even as the church willingly submits to the headship of Christ.”

Mark Driscoll (pastor of Mars Hill nondenominational mega-church ministry, sermon 2008): “Women will be saved by going back to that role that God has chosen for them. Ladies, if the hair on the back of your neck stands up it is because you are fighting your role in the scripture.”

I have no interest in attacking the photographer or the family who requested this photo. But let it be a lesson for all of us that the misogynistic legacy of Christianity undergirds the cultural tropes that might imply that “women talk too much” or that what women have to say isn’t interesting, clever, or worth listening to.

There is nothing innocent about binding and gagging women and girls. A photo like this is perceived to “funny” because it plays on cultural tropes about gender and gender behavior. But those tropes are not harmless, they daily perpetuate the idea that women and girls are less than the men and boys in our life and in the culture at large.

It is these attitudes that allow for continued violence against women; for the shackling of women prisoners during childbirth; for the harassment and shaming of women who seek legal abortions; for the prominence of rape at prep schools and on college campuses; for a 23% gender pay gap; for the lack of quality affordable child care; for the appalling lack of universal, paid maternity leave in a nation that pretends it valorizes mothers.

It is Advent, though.

In this season of waiting, watching, and hoping, I am hopeful that the family in this photo will recognize the inappropriateness of this image. That millions of people across the internet will think about the message that images like these perpetuate. And that we all have a lot to learn about what it will take to bring “Peace on Earth,” starting with a recognition of the equal worth and place of women and men. 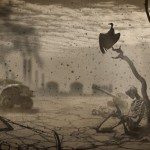 December 14, 2015
Is an Apocalypse Inevitable Before We Can Achieve Sustainability?
Next Post 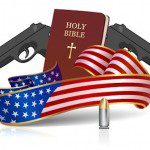 December 27, 2015 Is Tribal Christianity as Dangerous as Tribal Islam?
Recent Comments
0 | Leave a Comment
"Wow, you just sort of proved the whole point of the post -- the harm ..."
Obscurely Why Kavanaugh Should Withdraw
"Not sure why you continue to argue with me over the data. The study I ..."
Rebecca Todd Peters Kavanaugh and the threat to women
"Innocent until proven guilty."
Mr Kish Why Kavanaugh Should Withdraw
"Looks like the ethical and religious points are already covered. Here are some legalistic ones:-- ..."
tatortotcassie How to Fight Right-Wing Abortion Extremists ..."
Browse Our Archives
Related posts from To Do Justice