What to Do About Our Crisis of Racial Injustice?

What to Do About Our Crisis of Racial Injustice? July 9, 2016 Rebecca Todd Peters

This morning when I woke up, I was afraid to read the paper. Who else might have been killed while I was sleeping?

Cell phone footage of all of these incidents has brought these tragedies into our homes and into our lives in immediate and graphically disturbing ways. Perhaps it’s time we were more disturbed than we have been by the crisis of racial injustice in our country.

Perhaps the video that Castile’s girlfriend, Diamond Reynolds live streamed of their confrontation with police can help white America recognize the utter insanity of the way in which racial fear and prejudice shape everyday interactions between black and white people in this country.

In the video that Reynolds posted on Facebook in real time, not only did the police shoot and kill Philando Castile in the midst of a “routine” stop for a minor traffic violation, THEN they found it necessary to order Diamond Reynolds out of the car, forcing her to kneel on the ground while they handcuffed her and took her into police custody.

Yes, that’s right. After watching her boyfriend being shot and killed in the seat next to her, and with her four-year old daughter no doubt traumatized by the events – the police did not respond with any semblance of normal humanity. They did not see Diamond Reynolds as a potentially grieving and distraught woman in shock – they saw her as a potential threat.

I am a white woman. If I were in a car and my white husband were shot and killed in the seat next to me, I would be hysterical. I would expect the police to comfort me, to care for me, to wrap me in blankets and look for signs of shock. And they would.

I expect the police to be there to protect and care for me. And they do – because I am a white woman.

But their job is not to protect and care for me because I am a white woman. The job of law enforcement is to keep our communities safe, to enforce the law. That means caring for all the citizens in our communities – white, black, Latinx, immigrants, Muslims, Syrians – all of us.

But instead of thinking about how Diamond Reynolds might be feeling, instead of making sure that she was able to reach out to and comfort her young daughter in the midst of this horrific tragedy – those officers treated Diamond as a criminal. Apparently, they thought she posed so much of a threat to them that she must be forced onto the ground and restrained.

Much of the world saw her video of the encounter. We were all amazed by her composure under pressure. Her ability to talk calmly and rationally to the police who acted neither calmly or rationally in the context of a routine traffic stop for a broken taillight.

This is a mantra, a prayer, a plea, a holy petition, a refrain that we must continue to sing over and over again until we no longer have to. Until black lives are treated with the same dignity and respect afforded to white lives.

Yes, of course all lives matter – but in our present world, that is beside the point. White lives are not under threat in the same systematic way that black bodies exist in a state of constant threat. In our world today, it is black bodies that are in danger.

While the brutal attack on Dallas police officers is certainly a tragedy, the actions of a lone black vigilante obsessed with killing white people are the actions of an individual. Yes, his actions were racialized violence. Yes, he targeted white people. And yes, the murder of five white police officers in Dallas brings us back to the main problem that we have yet to face as a nation – racial injustice.

As individuals. As communities.

As a nation, we must change.

It took us centuries to get to this particular place of racial injustice, prejudice, hatred and violence – it is likely to us a while to figure out how to live in different ways as people who care about one another rather than people who are afraid of one another.

We need more sermons about race, racism, racial justice and how and why black lives matter.

We need to teach our children the history of our country and denounce the hatred, intolerance, and inhumanity of slavery. We must recognize how this history has damaged us as a nation.

We must recognize and identify the ways in which the racial injustice of our past continues to shape our present.

We need community task forces on racism and racial justice.

We need church task forces on racial reconciliation and justice.

We need a Presidential Commission on Racial Justice.

We need so much and so quickly. 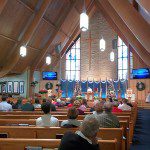 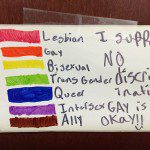