Governing in the Midst of Crisis: What Should Hillary Do?

Governing in the Midst of Crisis: What Should Hillary Do? November 5, 2016 Rebecca Todd Peters

While Hillary’s lead in the polls is narrowing as we approach election day, it appears likely that she will win on Tuesday.

Increasingly, the Trump campaign and prominent Republicans are threatening to create a political crisis in Washington by refusing to approve anyone she nominates for the Supreme Court as well as by threatening to attempt to impeach her after the election.

These tactics are not surprising at the end of an election season that has been the most vicious and heavy-handed campaign in my life-time. After all, Trump has been steadily creating a narrative of fraud and illegitimacy aimed at both the impending election results as well as Clinton’s very candidacy for weeks now.

While Hillary has certainly slung her share of mud this season, it is Trump’s style and rhetoric that has shaped the ethical contours of this campaign. With a thirty-year political history and a reputation as a policy wonk – it is doubtful that this is the campaign that Hillary wanted or would have run if she had faced a different candidate. Clinton is a nerd and like most nerds, she revels in intellectual debate. Rather than being the stuff of nightmares, for Clinton, policy details aren’t just her bread and butter, they are more like candy or dessert – treats to relish and enjoy. There is little doubt that she would have preferred a campaign that allowed her to go head to head with her opponent over issues that matter to the American public.

The fact that that is not the campaign we have had speaks volumes about the failures of our political system as well as the divisiveness, hatred, and anxiety that mark the electorate.

Regardless of whether you love her or hate her, if she is elected (and it looks like she will be), she will be the President of the entire country, as she has been reminding all of us the past few months. Hillary is well aware of the challenges that she will face trying to govern a country that is as deeply-divided as the US is today. The questions of what she must do and how she must lead are intimately connected to what we must do as citizens of this country and how we will engage in the political process after the election.

It is what comes next that is the hard part. This election has the potential to be a defining moment in the history of this country. Not just because Hillary will be the first female elected President in the United States. Clearly that is historic. More importantly, she will gain the Presidency at a critical moment in the life of the country when our democracy is on the brink of self-destruction.

Admittedly, the task of bridging the divide seems pretty bleak from our current vantage point.

While the crisis feels very political since lawmakers are threatening impeachment and gridlock; the reality is that the problems that we face as a country are very real AND politicians are threatening to turn our real cultural crisis into a political crisis.

We have very real problems in this country. From the Black Lives Matter campaign to the Trump rallies, we can see that increasing numbers of our citizens our unhappy with what is happening in our country.

After all, from unequal access to education to racial profiling, from mass incarceration of black folk to the disproportionate rates of police brutality against blacks – racism is very real in our country.

Likewise, from the shuttering of mines in West Virginia to the economic collapse in the Rust Belt, from the evaporation of textile, furniture, and tobacco jobs in NC and other Southern states to the loss of electronic manufacturing jobs in California – shifts in the global economy are hurting the working class.

While, in some ways, these two groups highlight the crisis that the new President will inherit in this country, the reality is the crisis is much more than a racial divide or a divide between whether or not the racism or the economy are the most important problem that we face.

Coming off of eight years of a black President and facing the prospect of the next President being a woman – the crisis that we face is over the narrative of who we are as a country.

Trump has ginned up the country to believe that we have “lost” something. The sub-text of “making America great again” plays on the desire to have a white man in charge again. A white man who will somehow turn back the clock and get rid of gay rights and abortion and take the country “back” to a “better” era. The image of America Trump is selling is an image where “ladies” have their place and it’s not in the White House – women’s rightful place is in the bedroom. His supporters have not turned a blind eye to his treatment of women, they simply do not think he has done anything wrong.

While Hillary hasn’t exactly offered us the hope-filled future that Obama did – she does represent a continuation of the Obama White House and as a woman, her leadership continues to the threaten the patriarchal power structures that have undergirded our country’s narrative for centuries.

While there is not much she can do to convince her nay-sayers that climate change is based on science and Obama was born in the US, she does have the opportunity to continue to build on the important policy work that Obama has begun.

In addition to the policy work, however, Clinton needs to offer the country a new narrative about who we are as a country. People need a new story to tell of who we are. We are living into a new era of radical diversity and multi-cultural pluralism but until we have a positive cultural narrative that helps us to celebrate and appreciate this changing identity – we are at risk of falling back into the chasm of crisis and despair.

The post-election danger is that unscrupulous, ideological politicians will use the country’s identity crisis to further destabilize the government. The task of our legislators is to work together to try to solve our problems, not to capitalize on our social problems and use them for political gain.

If Clinton wants to be the leader for the whole country – she needs to offer a vision for the country that addresses the wicked problems that we face and a vision of how we are better together as a country. 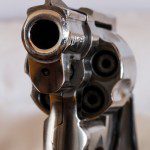 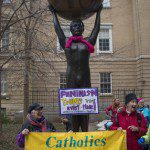 Evangelicals, you have some denouncing to...
Grace-Colored Glasses
Related posts from To Do Justice