This post is part of a debate with Justin of The Faith Heuristic. The topic is: The Evidence Supports the Existence of a God. The debate is structured as follows:

When I saw Justin was making a fine-tuning argument as the second part of his opening statement, I was a little surprised not to see any reference to the Drake Equation (which I first discovered while reading one of the many excellent installments of The Year’s Best in Science Fiction as edited by Gardner Dozois).

Imagine my disappointment to find that the Drake Equation has been largely discredited. Scientist did not believe they could make estimates of the various probabilities and proportions that Drake specifies at any level good enough to make predictions. The result of all those uncertainties multiplied together was simply noise and error.

The physical fine-tuning argument suffers from exactly the same flaw. Our ability to estimate the probabilities of particular values for physical constants when we still do not understand what forces gave rise to them is necessarily small. Drake’s equation has thusfar proven impossible to firm up, even though the numbers we are trying to compute (rate of star creation in our galaxy, average number of planets that can support life per star with planets) are more firmly situated in the physical, not the metaphysical realms.

Justin’s citation of John Leslie’s thought experiment demonstrating the failure of the anthropic principle is telling. The example is:

Suppose you are to be executed by a firing squad of fifty men at point blank range. You hear a loud bang and then notice that you are still alive and unharmed. Would you invoke the (invalid) form of the weak anthropic principle and assume that they all happened to miss – that random chance was at work? Of course not. You would be very surprised to find out that you are still alive. You would suspect intelligent design. Perhaps a friend paid the members of the firing squad to deliberately miss.

Justin and John Leslie are right to find the anthropic principle insufficient in this instance, but the reason it fails is because of the strength of our assumptions about the probability of our survival. The mechanics and purpose are well understood. In this case, the probability of survival can be assumed to be miniscule with a large degree of certainty. Although there may be reason to think that the fine-tuning of the physical constants are unlikely, as the failure of the Drake equation shows, our level of certainty for this estimate is vanishingly small.

As a scientist, I must be tolerant of uncertainty, and not reach for the first explanation proffered out of a desire for the safety of certainty. Lacunae in my current understanding of the metaphysics of the world will not prompt me to reach for deism unless it does more than just fill a gap. Theories must be testable to be believable.

June 21, 2010 Eye has not seen, ear has not heard
Recent Comments
81 Comments | Leave a Comment
"On that note... I recommend every Catholic and Christian have that post a read. Click ..."
Oktavian Zamoyski Effective Altruism and Caritas [Radio Readings]
"I think too many people have grandiose and unnatural ideas about charity. It becomes a ..."
Oktavian Zamoyski Effective Altruism and Caritas [Radio Readings]
"Jesus wasn’t resurrected as a great miracle simply in order to convince people to believe ..."
John The Two-Lazarus Problem
"The cartoon is amusing, but flawed. One of the four virtues of Stoicism is Justice; ..."
Vulpes Inculta 7QT: Stoicism Man, Semi-Imaginary Money, and ..."
Browse Our Archives
Related posts from Unequally Yoked 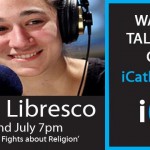