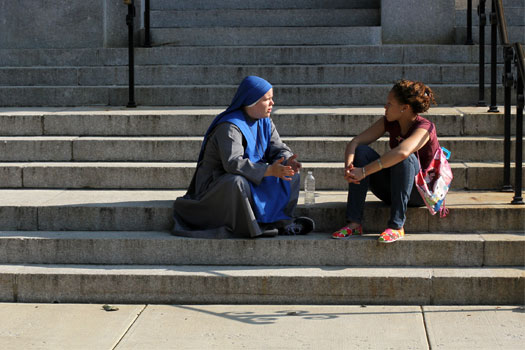 In this week’s installment of the Pope Francis bookclub, the then-Archbishop talked about “missionary joy” that invites people in to learn the source.  I was reminded of a nun who recently gave a talk in D.C. on Spe Salvi.  In her talk. she mentioned being asked on the street, “What is the reason for your joy?”

When people ask a habited nun this question, they’ve got a reasonable guess as to what kind of answer they’re going to get.  I’m less sure what to do when I get a similar question.

At my previous job, which involved a lot of in-person interactions, I got asked fairly frequently, “Why are you always so happy?”  “You smile a lot more than most people I know.”  “You never seem upset!”

The reason for my cheeriness was usually a mix of these four factors:

Obviously, I never supplied #4 as an answer, since it would have breached the decent draperies of work.  But I pretty much never cited #3 either, since it seemed a bit gauche to proselytize to people who were trying to buy a service from me (or to receive the service they’d already paid for).  It didn’t seem fair to them or to my employer to put up a bit of a barrier to the business transaction.

Somehow, talking about Christianity felt very different than talking about Stoicism.  It felt possible to explain how a philosophy meshed with my life without worrying that my interlocutor might feel like s/he was getting a hard sell or would have trouble extricating him/herself from the conversation.  But if I were talking about theology, it seemed hard to have a casual conversation.

I haven’t pinned down why the two conversations feel so different.  It might be because I’m not actually a Stoic anymore, so I’m not recommending a major shift in worldview when I talk about Stoicism, just a few useful reframes.  It doesn’t feel like my interlocutor is getting pitched a big ask.

It might be that Stoicism is mostly instrumental, while Christianity is a truth claim.  So I can talk about how and when Stoicism is useful without getting bogged down in a discussion about variant Greek translations or the writings of Josephus.  Plus, I don’t feel like I’m selling the philosophy short by just talking about it being useful, when Christianity isn’t a handy hack to me.

It might be that Stoicism is weird and rare, so I feel like my interlocutor is hearing something new and interesting.  But, because Christianity is a majority religion in the U.S. I worry that I’m joining a barrage of proselytization that my conversation partner might find exhausting or just so much noise.

Or, I may just be massively overestimating the potential awkwardness or discomfort that would be produced by talking frankly about my faith.  I’d be especially curious about the opinions of atheists or any non-Christian commenters on this topic.

What are your personal preferences?  Does bringing up religion transgress the light pleasantries of small talk?  If I want to be honest, what would be the most inviting way to respond? 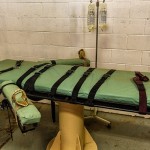 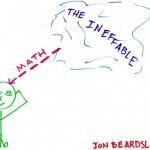 January 24, 2014 7 Quick Takes (1/24/14)
Recent Comments
0 | Leave a Comment
"I'd love to see a video of how it works. keranique shampoo reviews"
Marlene Garza Welcome Camels with Hammers to Patheos!
"Logismoi (the plural of logismos) are a fairly simple concept; they are whispers from either ..."
Rob, Portland Logismoi, Vampires, and Other Intrusive Thoughts
"I imagine I’ll do a lot more reading and pick a lot more fights over ..."
Donalbain A little about the queer stuff
"You are part of a search and rescue for lost Catholics.Regular updates to the countdown ..."
Edward Palamar I’m keynoting at a Con for ..."
Browse Our Archives
Follow Us!