This weeks links are all about love and storytelling (as if there’s a difference).  First up, a story I found charming about a geek who decided to datamine his way to OkCupid success:

OkCupid’s algorithms use only the questions that both potential matches decide to answer, and the match questions McKinlay had chosen—more or less at random—had proven unpopular. When he scrolled through his matches, fewer than 100 women would appear above the 90 percent compatibility mark. And that was in a city containing some 2 million women (approximately 80,000 of them on OkCupid). On a site where compatibility equals visibility, he was practically a ghost.

He realized he’d have to boost that number. If, through statistical sampling, McKinlay could ascertain which questions mattered to the kind of women he liked, he could construct a new profile that honestly answered those questions and ignored the rest. He could match every woman in LA who might be right for him, and none that weren’t…

He text-mined the two clusters to learn what interested them; teaching turned out to be a popular topic, so he wrote a bio that emphasized his work as a math professor. The important part, though, would be the survey. He picked out the 500 questions that were most popular with both clusters. He’d already decided he would fill out his answers honestly—he didn’t want to build his future relationship on a foundation of computer-generated lies. But he’d let his computer figure out how much importance to assign each question, using a machine-learning algorithm called adaptive boosting to derive the best weightings.

You’ll have to read the article yourself to see if his mathematical approach paid off.

Meanwhile, perennial favorite Math With Bad Drawings also cast a wide net recently, asking passerby at a math conference to illustrate why they loved math in a single sheet of paper.  He has 39 images up in his gallery, but this was one of my favorites. 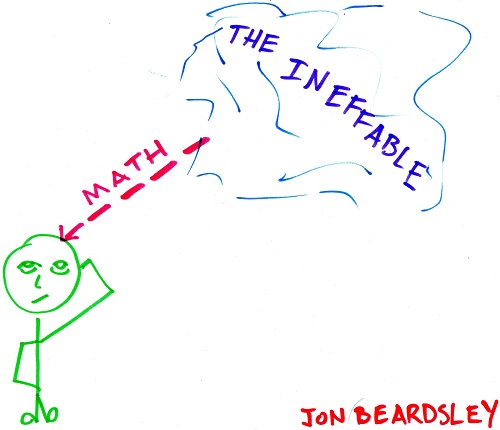 But perhaps you’re not in love with math.  Perhaps you find it hard to date and settle down with any academic discipline.

Then you might enjoy this choral rendition of “Every Major’s Terrible” performed by the Simon Fraser University Choir and inspired by this XKCD.

The song doesn’t bemoan extracurriculars, and I found a delightful little article related to one of mine: Dungeons and Dragons.  Tony DiTerlizzi explains that a bunch of Prehistoric Animal figurines wound up being the inspiration for many of the inhabitants of the Monster Manual:

There once was an unknown company in Hong Kong that made a bag of weird animal-things that were then sold in what once were called dime stores or variety stores for like $.99. I know of four other very early monsters based on them. Gary and I talked about how hard it was to find monster figures, and how one day he came upon this bag of weird beasts…He nearly ran home, eager as a kid to get home and open his baseball cards. Then he proceeded to invent the carrion crawler, umber hulk, rust monster and purple worm, all based on those silly plastic figures. The one that I chose was known in the Greyhawk campaign as “the bullet” (for it’s shape) but had only amorphous stats and abilities, not being developed. Gary told me to take it home, study it, and decide what it was and what it could do.

Alas, no mention of my favorite figurine in my friends’ set of minatures: the Abyssal Maw. 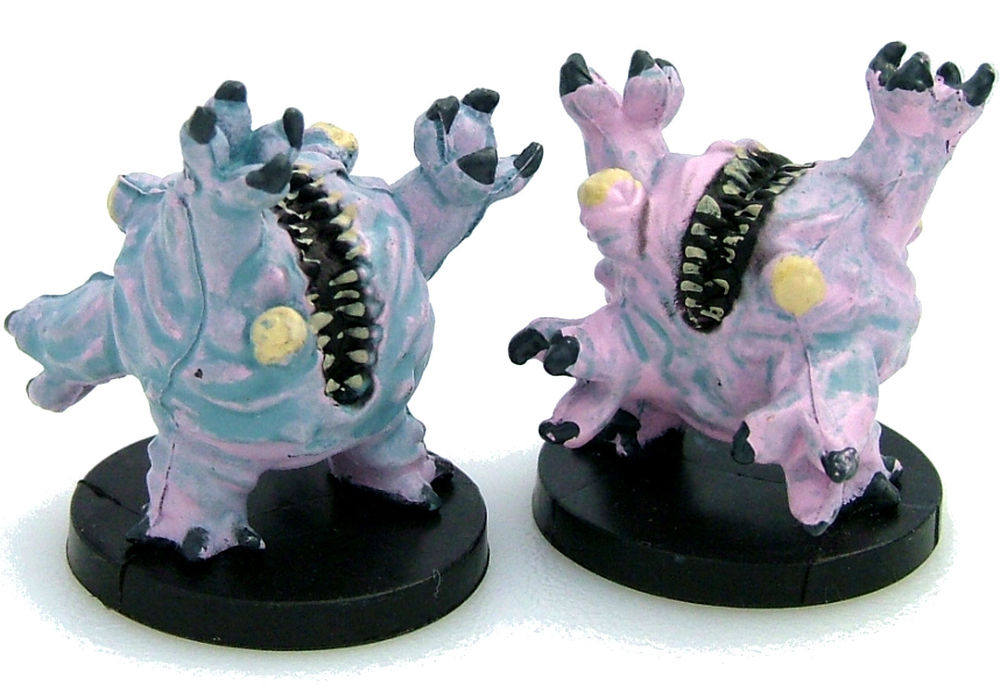 I’ve been completely uninterested in The Wolf of Wall Street, but Max Gladstone has an essay up that has me intrigued for the first time since the trailers hit.

So, am I giving monarch-apologist fiction a free pass?  No.  The spiritual self-rule I’m talking about (which by the way also plays nice with Christian theology; if you think what I’m describing sounds awfully prideful I humbly submit to you Augustine’s discussion about standing upright in The City of God, not to mention Dostoyevsky’s Grand Inquisitor scene from Bros. K) is the absolute reality; secular kingship is the shadow that reality casts on the cave wall.  To play in this territory, stories need to guide the reader away from the shadow, to the reality.  To make Arthur a secular Christ, storytellers gave him a mystic birth, a wizard advisor, draconic signifiers, a magical sword, tragedy and destiny and the Holy Grail and Green Men and all the like precisely because these things were weird.  These are symbols that Arthur exists in the realm of the sublime, of the archetype—White’s “Island of Gramarye” where you and I shall fare.

No, no, it turns out be about The Wolf of Wall Street, I swear!

Wolf of Wall Street, I think, is a brilliant depiction of the Wasteland of the Evil King.  In Belfort’s world, no one is old.  In Belfort’s world, no one is wise.  In Belfort’s world, there are no black people except for his female housekeeper.  In Belfort’s world, women exist entirely for sex and money laundering—and (this is my favorite bit) he’s not even any good at the sex!  Sexuality defines his physical life and the few times we see him get busy, he’s horrible at it.  Like, fourteen-year-old-boy-in-back-of-Dad’s-Camero, “um-shit-where-does-this-bit-go” horrible.  And at the apex of Belfort’s anti-initiation, the moment of grail-finding in a spiritual kingship narrative?  He finds his Grail, the ur-Quaalude, consumes it and transforms into an infant, unable to speak or walk or even crawl, in one of the best sequences of physical comedy I’ve ever seen in a movie.  For all the lushness of his surroundings, he inhabits a blasted land.  (Come to think, he’s just as bad at drugs as he is at sex!)

I like some of Malcolm Gladwell’s writing, but I couldn’t help but be charmed by what kind of anecdotal data caused him to change his theory on religion (and head back toward the Mennonite faith of his childhood).

When I was writing my book David and Goliath, I went to see a woman in Winnipeg by the name of Wilma Derksen.

Thirty years before, her teenage daughter, Candace, had disappeared on her way home from school. The city had launched the largest manhunt in its history, and after a week, Candace’s body was found in a hut a quarter of a mile from the Derksen’s house. Her hands and feet had been bound.

Wilma and her husband Cliff were called in to the local police station and told the news. Candace’s funeral was the next day, followed by a news conference. Virtually every news outlet in the province was there because Candace’s disappearance had gripped the city.

“How do you feel about whoever did this to Candace?” a reporter asked the Derksens.

“We would like to know who the person or persons are so we could share, hopefully, a love that seems to be missing in these people’s lives,” Cliff said.

Wilma went next. “Our main concern was to find Candace. We’ve found her.” She went on: “I can’t say at this point I forgive this person,” but the stress was on the phrase at this point. “We have all done something dreadful in our lives, or have felt the urge to.”

Finally, I’d like to know if any of you can help my friend with a very specific book recommendation.  Here’s what she wrote to me (apropos of a book that was starting to remind her of The Hunger Games):

I have had it with YA novels where the female protagonist becomes politically important Against Her Will, because she’s a Figurehead, and doesn’t have any Ambition (which is baaaaaad), but ends up getting Power anyway without having to do any Machination to get there. (Or she does, but only reluctantly, to stop being a Figurehead.)

There needs to be a YA sci-fi or fantasy novel where the female protagonist is an unapologetic Slytherin. Possibly also a princess, but that’s just me.

The first thing that came to my mind was Just Ella by Margaret Peterson Haddix (p.s. the new cover at the link is terrible, the one from when I was a kid is way less wussy).  Beggars in Spain maybe fits the bill, too.  And Princess Cimorene from Dealing With Dragons is someone I trust to get things done.  Any other suggestions? 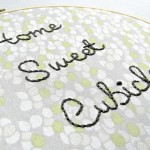 January 25, 2014 Here's your job. Don't get too comfortable.
Recent Comments
2 Comments | Leave a Comment
"Back to Square 1 ... ¯\_(ツ)_/¯Season 3!G.657BW.CO/d5573Y"
Bobby Klein My Good Catch Catches Them All
"We all are meme thiefes here 😂🙃fM.9226B.US/fA5573BU"
VanguardAI Books on deck for me for ..."
"To understand an art, you must understand phynomena."
Unlcuky13 I’m speaking about my conversion in ..."
"Despite the differences in level, it's still an excellent manga.pt.2632W.US/U5573xM"
Pilzkeks Dissecting the Catholic Vote for FiveThirtyEight
Browse Our Archives
Related posts from Unequally Yoked