This is one of a series of posts about math and morality.  I’ll be getting back to the series soon, but I’m currently pausing to answer some of the questions that have been accumulating.

In comments on “On What Evidence?” Crowhill and Charles got into a disagreement about human morality and evolution that I exerpt below.

Does there have to be some sort of “objective morality” for a dog to know how he’s supposed to behave towards other dogs? Isn’t it entirely possible that dogs simply developed some set of arbitrary social rules that happened to work decently well for them?

Why can’t something similar be true of humans? Why couldn’t we have developed some set of social rules that helped our species survive?

You a fatal flaw when you discuss social behavior evolving or ‘developing’ – first you use the word ‘develop’ as if to make it insignificant, second you repeatedly say that they are arbitrary, etc…

If rules exist within a social group because they helped the survival of a social species – they are ANYTHING but arbitrary!

I think it’s actually both reasonable and important to use the term arbitrary to describe evolutionarily guided social systems, but to explain why, I need to switch mathematical subfields to game theory.  Game theory can be loosely summarized as the study of how to make choices.  Researchers talk about strategies to adopt to try and get the best payoff possible and also characterize common snarls and situations.

A Nash equilibrium occurs when, for each player, the current outcome is optimal assuming that no other player changes his/her strategy. This means that no player has an incentive to change their behavior. A Nash Equilibrium is absolutely not a guarantee that the current state is actually the best for all concerned.

The best known example of a game where the Nash Equilibrium solution sucks and the best solution is unstable is the Prisoner’s Dilemma (click the link for explanation if you’re not familiar). If both players keep mum, either benefits from changing strategy. In the case that they both rat, neither benefits from changing strategy. Even though both being silent is clearly preferable to both snitching, there’s no way to escape from a Nash Equilibrium without finding a way to coordinate action.* 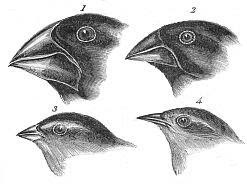 I think it’s reasonable to assume that social behavior represents, if not a perfect Nash Equilibrium, at least something close to one. In that respect, it certainly is not arbitrary. However, I would bet that there are a variety of sets of social norms that are stable enough to be close-enough Nash Equilibria, just like our current situation. This certainly seems to be the case in other aspects of evolution. Think of Darwin’s finches. Each beak configuration is advantageous and distinct, but the choice of which stable configuration prevailed was pretty much arbitrary.

If we thought the structure of our society carried as little moral weight as the structure of a bird’s beak, there would be no reason to be troubled by the fact that some of the values or practices of our society was arbitrary. However, it’s easy to imagine plenty of stable societies that could be construed as Nash Equilibria but which we find to be abhorrent. This is another nail in the coffin of the idea that evolutionary fitness is a valid way to defend our actions.  We need to be aware of our social system as arbitrary at least in part and be attentive to ways it ought to be reformed.

*Unrelated to larger point about morality but still interesting:

A lot of effort is put into finding ways to pull people out of unpleasant Nash Equilibria. One of my favorites is the National Popular Vote campaign which aims to do away with the Electoral College. Although each state can decide to apportion it’s electoral votes however it wants, no state has an impetus to deviate if it will mean less attention from politicians. What NPV does is get states to sign on to legislation that promises their electoral votes to the winner of the national popular vote provided enough states have also passed the legislation (it goes into effect when states with electoral votes totaling 270 sign on). The current tally is 6 states and 73 electoral votes.

August 5, 2010 Math and Morality Index
Recent Comments
92 Comments | Leave a Comment
""Do you honestly think that a child raised by a woman has no exposure to ..."
Zorin 2012 Queer Blogathon [Index Post]
"I'd love to see a video of how it works. keranique shampoo reviews"
Marlene Garza Welcome Camels with Hammers to Patheos!
"Logismoi (the plural of logismos) are a fairly simple concept; they are whispers from either ..."
Rob, Portland Logismoi, Vampires, and Other Intrusive Thoughts
"I imagine I’ll do a lot more reading and pick a lot more fights over ..."
Donalbain A little about the queer stuff
Browse Our Archives
Follow Us!