Reading over Justin Martyr’s debate over the morality of gay marriage with Larry of Rust Belt Philosophy, I think I’ve managed to come up with the single least catchy talking point on the topic of gay marriage:

All we’re really debating is how to handle a free rider problem for a government benefit.

Doesn’t exactly sound media-ready, I guess, but it seems like an accurate sum up of the issue.

Civil marriage exists, as do most government programs, to change the incentives associated with a particular activity. According to Justin, civil marriage is aimed at promoting stable, monogamous, male-female households and establishing them as the preferred environment for raising children. 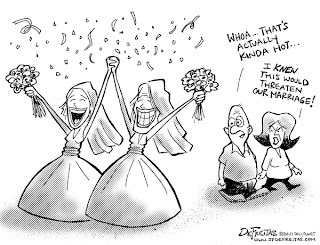 Civil marriage, as it exists, allows in plenty of pairs who don’t meet that criteria. Infertile couples, elderly couples, couples not planning to have children, couples who cheat, couples who divorce are all essentially free riders under Justin’s schema. They gain from the financial and social benefits of marriage without adhering to the purposes for which it was designed. Depending on the exact goals of government-sanctioned marriage, all gays might be free riders or a certain proportion (not necessarily equal to the proportion of straights) would be free riders.

Now we’re playing a numbers and social sciences game. We want to be able to estimate the percent of free riders and the potential harm that they do and then balance it against the harm done by excluding legitimate participants. As long as the primary purpose of marriage is a healthy, durable environment for raising children, I think opponents have a difficult time maintaining that no gay couple could meet the requirements of marriage. There are too many counterexamples.

Estimating the percent of gays who would marry and not measure up probably requires actual data, so we can all check in with Massachusetts and others in about 18 years. However, as long as there is little reason to believe that we are near a free rider tipping point, I would argue that the proportion does not matter too much, especially if excluding gays wholesale does substantial harm.

Personally, I’m inclined to believe that excluding gays would do more harm than purging a different group of obvious free riders: women who have passed menopause. Gays are already stigmatized and discriminated against (recall that the president of the Montana Tea Party caught hell this week for appearing to endorse the murder of homosexuals). Justin may just be looking out for gays when he says he wished to exclude gays from the institution of marriage in order to protect them from “a very heteronormative view of homosexuality,” but this exclusion does contribute to the idea that they are too dangerous, too other. In addition, it reduces the chance that marriage and childrearing are promoted as compatible with homosexuality and a positive option for homosexuals.

Perhaps this free rider problem sounds a little dry, but it’s the necessary consequence of discussing government-regulated marriage. I still wish we’d just establish civil unions for everyone and leave marriage to religions, but, if that won’t catch on, perhaps Justin and others should just start promoting ‘sacramental marriage’ in contrast to ‘state marriage.’ I think state marriage stopped looking like their vision of sacramental marriage a long time ago (New York’s recent acceptance of no-fault divorce, now legal in every state, may have been the last nail in the coffin). Why not admit marriage doesn’t belong to them anymore and move on?

Note: I didn’t touch Justin’s claim that adoption is automatically bad for children (he goes so far as to say that gay adoption is “a violation of the rights of children” since they are deprived of their biological parents). Like Larry, I don’t believe Justin backed up that claim, so I’m waiting for Justin to answer some of the questions about adoption I wrote on the debate thread. He said he’d get to them after the debate, and I look forward to his response. I’m also curious how he applies his arguments to the case of his own adopted daughter from Ethiopia.

September 6, 2010
Back to School Update and Blog Rejiggering
Next Post

September 9, 2010 Quick Update on Justin Martyr and Gay Marriage
Recent Comments
5 Comments | Leave a Comment
Browse Our Archives
get the latest from
Catholic
Sign up for our newsletter
POPULAR AT PATHEOS Catholic
1