Can’t I Love You Into Being Happy?

When Ellery Weil guest posted yesterday on The Last 5 Years and the demanding kind of support that Jamie offers Cathy, I realized that Jaime could have benefited from internalizing a meme I’ve seen floating around on tumblr.

Golbats for Equality spun up a quote from Nidoqueen into this image:

In the musical, Jaime doesn’t know how to coexist with Cathy’s misery and exhaustion.  He does try to help, in good faith, but I think Ellery is right that Jaime needs to feel like his help is working, immediately, in order to be confident in himself and in Cathy.  When he was writing his “Shmuel” parable, and imagining how it would go, he imagined himself in the role of the magic clock — he would tell Cathy that she gets to be happy, and, after a little initial reluctance, she’d become so.

After reading Ellery’s comments, Jamie reminds me a little of the husband in Next to Normal.  In that show, the character’s partner is facing a much more debilitating problem (bipolar disorder), but her partner is similarly stymied by his inability to help.  I like “I’ve Been” enormously, in which he is exhausted but still committed, but the closest parallel to Jamie’s strained helpfulness is probably “It’s Gonna Be Good”

So what would it look like to do better than the lovers in The Last 5 Years and Next to Normal?  I think there are some good ideas in a recent post by Eve Tushnet, when she talks about ways to address suffering that can’t be solved on your schedule.  I’m excerpting it below, but the whole post (“Marriage as Work vs Marriage as the Cross”) is well worth reading (and it has the caveats you’re looking for, about when to give up on a relationship):

Losing this vocabulary of patience and taking up one’s cross has a few negative effects on us. First, if the only response to difficulties in marriage is “work harder,” we judge ourselves and others when our/their hard work doesn’t pay off. We expect payment for work done, and when our spouse doesn’t change, it’s natural to feel resentment. In the metaphor of “marriage as work” there’s no place for that resentment to go, no way to dissolve it: When will you pay me, say the bells of Old Bailey? The metaphor focuses our attention on the work we’re doing and what we’re owed for it.

Or, if other people’s marriages manifestly aren’t improving, we judge them (or give them the kind of advice which feels like judgment, it’s not like I’m innocent here) and tell them to work harder or work smarter.

Eve talks about how to seek sublimity in sorrow, so that someone like Jamie could acknowledge his own powerlessness to make Cathy happy or confident without feeling like that meant he had failed as a husband or that he couldn’t support or be supported by Cathy, as long as this pain persisted.  In Eve’s understanding, sometimes the patience engendered by this approach allows problems (including one partner’s fear of the other one’s problems) to solve themselves or give both people space to later notice a different, better way to help.  In some cases, though no resolution is forthcoming, and then the sublimation that Eve discusses isn’t a means to an end, but an end in itself, where partners learn to coexist with the trouble in a way where small choices and sacrifices are acts of love, if not as Hallmark-looking as dramatic boombox lofting.

I think people are better at adopting the framework Eve discusses for troubles we categorize as entirely outside of our locus of control, things like terminal or chronic diseases–It would be bizarre for Jamie to see the failure of his story to cure a hypothetical tumor as a failure of his love, but there’s still a lot of “put the work in to beat disease” rhetoric around.

The secularized version of Eve’s advice might be reminding partners that they have the option of providing palliative care.  In Jamie’s case, that might mean realizing that he has ways to be kind to Cathy that aren’t directed at any long-term change in her mindset or their relationship.

Here, he might be happy to tell her that he’s ok with her skipping one of his book talks, because it gives him the opportunity to improve tonight for her, even if it has no bearing on tomorrow.

Don’t forget, The Last 5 Years is available to rent or stream, so you, too, can enjoy it and then send me a guest post.  My previous posts on the movie are “No Villains, Just Inept Lovers in The Last 5 Years“ and “Asking a Lover for Too Limited Support” And Ellery Weil contributed “The Story of Shmuel and Tailoring Support.” 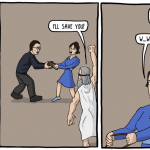 February 27, 2015 7QT: Stoicism Man, Semi-Imaginary Money, and Second Moons
Recent Comments
0 | Leave a Comment
"Oh! And you can get there via Naval Gazing.(probably not by Navel Gazing...)"
TheSparksFlyUpward Too Sucky To Be True
"Hello, Deiseach!1. This is not an ad. (It always reassures me when someone says that!! ..."
TheSparksFlyUpward Too Sucky To Be True
""Do you honestly think that a child raised by a woman has no exposure to ..."
Zorin 2012 Queer Blogathon [Index Post]
"I'd love to see a video of how it works. keranique shampoo reviews"
Marlene Garza Welcome Camels with Hammers to Patheos!
Browse Our Archives
get the latest from
Catholic
Sign up for our newsletter
POPULAR AT PATHEOS Catholic
1