Did you know that Earth has a second moon?   Because I sure as heck did not (I’m in the lucky 10,000!).  Apparently, the astronomical body 3753 Cruithne is also in orbit around the Earth, but its orbit is bizarrely convoluted — to the point where it takes 800 years for it to make a full, wobbly circuit.  io9 has all the details.

And if you’re trying to learn other, unknown-to-you, sometimes terrifyingly interlooped ideas, Existential Comics has a “How to Study Philosophy” post, which has specific recommendation, as well as some advice on how to read:

I am proposing a new principle: The Principle of Science. When first reading a philosophical text, you should read it not as the most compelling argument, but rather as though you were reading a scientific text. The reason for this is simple: scientific texts are taken as fact. Philosophy texts are always presumed to be questionable. When you first encounter Newton’s Law that says an object in motion will continue in motion until acted upon, you don’t say, “What a load of crap, I threw a meat pie at my cousin Mike just last week, and it stopped on its own accord before it got to him.” Obviously, although scientific theories can be overturned, people assume that they are correct, so their only objective becomes trying to understand the theory. However, when Kuhn says that science, like evolution, progresses towards nothing in particular, a lot of people’s first reaction is something like: “What a load of shit, science obviously progresses towards the truth”, then they spent the rest of the time trying to work out just how wrong Kuhn is. Now, obviously Kuhn’s claim is much more controversial than Newton’s, and in fact most philosophers don’t agree with him, but the point of reading his book shouldnt necessarily be to become a Kuhnian, but rather to understand him. That doesn’t mean that you cant critique the ideas afterwards, but understanding the ideas first is much more important than refuting them, and you really shouldn’t worry about it too much. In fact, its often more fruitful to read another philosopher’s critique than trying to come up with your own.

Meanwhile, on the comic side of that website, I loved the latest adventures of Stoicism Man

Stoicism Man’s response to distress may not be generally appreciated, but I did like reading about how the Mets sometimes try to salve their players’ suffering:

For the last few years, the Mets’ rehabilitation team has given metal coins like these to more than 40 players for getting through a program designed to get them healthy. Not every player receives one. The injury must be a significant one — such as Harvey’s Tommy John surgery — that keeps the player out for a while, and the player must put forth a genuine effort.

The coins, then, are their reward. Pearson views them as a motivational tool, something the players can strive for, a keepsake they can cherish later in life. Some players are ecstatic to receive their coins; others are indifferent. But in general, they understand the coin’s purpose.

I like that this team is trying to find a way to address a player’s fear and emotional hurt, as well as the physical injury. Hurrah for ritual and tradition!

Meanwhile, on the subject of unusual coins, I liked reading the origin story of Valve’s (a video game company) economist-in-residence:

When I read the opening line of the email in question, my finger almost pushed the delete button:

“I’m the president of a videogame company (www.valvesoftware.com).”

I thought to myself: Oh, not another “business proposal” from a crackpot… However, something in my head stopped my finger from pressing DEL while my eyes pondered the next line:

“We are running into a bunch of problems as we scale up our virtual economies, and as we link economies together. Would you be interested in consulting with us?”

I was intrigued. The finger retreated from the keyboard’s right hand side and I read on:

“I have been following your blog for a while… Here at my company we were discussing an issue of linking economies in two virtual environments (creating a shared currency), and wrestling with some of the thornier problems of balance of payments, when it occurred to me “this is Germany and Greece”, a thought that wouldn’t have occurred to me without having followed your blog. Rather than continuing to run an emulator of you in my head, I thought I’d check to see if we couldn’t get the real you interested in what we are doing.”

Max Gladstone, author of Three Parts Dead and the forthcoming Last First Snow, has also been trying to understand a different world and way of thinking.  He has a post on translating Chinese poetry and wondering what to make of unspecified pronouns:

I did greater violence to Li Bai’s original—or did I?—when I inserted ‘I’ and ‘my’ into the second couplet.  The original poem does not, so far as I can tell, indicate that the speaker is the person raising his or her head.  Nor, of course, does the original language indicate the gender of the speaker.  (Fun fax: spoken Chinese doesn’t gender the third-person pronoun, and written Chinese didn’t gender the third person pronoun until IIRC the Westernization and modernization pushes of the late 19th and early 20th centuries.  Hooray!  Wait. [Though to be ‘fair’ you could read this as erasure, too.] )  To create an English version of Silent Night Thoughts, the writer has to decide: is the poet speaking?  Is the poet describing someone else?  If so, what’s that person’s gender?  (He raises his head? She raises her head?)  Is the poet addressing the reader?  (“You raise your head”?)

And this is where I want my time machine.  In English, this indeterminacy seems deliberate.  You’ll rarely write a person-indeterminate English sentence without meaning to.  But in Chinese poetry, that’s a straightforward task.  In fact, formal restrictions can require it.  So: would Li Bai’s readers have read an ‘I’ into the poem?  A ‘he’?  A ‘she’?  A ‘you’?  Would the indeterminacy operate for them the way it seems to operate in English, allowing the reader to flow freely through the poem, choosing to see it from the subject’s point of view or from an outsider’s, or from the point of view of a person in the Old Country thinking of his exiled lover?  Or is this an artifact of differences in language construction?  Would a contemporary reader even have recognized this indeterminacy?

If you’re worried that you’ve been translated across genres, specifically into the ouvre of Victor Hugo, The Toast has a handy diagnostic guide for How To Tell If You Are In A Victor Hugo Novel

You are a mother and, in a moment of despair, exclaim that you would die for your child. Society takes you up on the offer.

You are in sympathy with but two things in the world. One of them is a building.

You come across a stranger in a darkened alley by a cathedral—but is it a stranger? No! For there are but twelve people in all of France, and you have long and complicated histories with all of them.

Finally, the only TV show I’ve been watching, Agent Carter, just came to its end, and I wanted to share this story about the actress playing the lead (Hayley Atwell) in an earlier role in a Brideshead Revisited film, which is both depressing and heartwarming:

Atwell has reported that she was asked by the film company to lose weight for her role as Julia Flyte. It was only when co-star Emma Thompson (who will play Lady Marchmain) heard the news that things got resolved:

Says Atwell: “I went round to Emma’s one night and she was getting very angry that I wasn’t eating all the food she was giving me. I told her why and she hit the roof.” The no-nonsense Thompson was so outraged that she called the producers the next day and threatened to resign from the film if they forced Atwell to lose weight. Faced with Thompson — a two-time Oscar winner — on the warpath, Miramax Films swiftly relented.’ 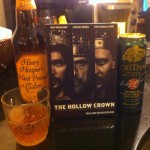