Questions for Atheists: Does Moral Law Exist in Itself?

Questions for Atheists: Does Moral Law Exist in Itself? December 31, 2010 Leah Libresco

This post is one in a series responding to Michael Egnor’s challenge to New Atheists to explain what they believe.  And yes, I’m slipping the last answer in right before the year ends. Edited to add: WHOOPS!  I have two questions left.  One on Aristotle’s four causes and one on subjective vs. objective experience.  Ah well. there goes my feeling of accomplishment.)

For his question on moral law, Egnor set up his prompt as a dichotomy:

Does Moral Law exist in itself, or is it an artifact of nature (natural selection, etc.)

This phrasing makes my answer an easy one.  I don’t think morality can have its source in natural selection.  As I wrote earlier this week, evolution doesn’t operate with some kind of preset or optimized telos.  Evolution eliminates the unworkable, but it doesn’t differentiate between different stable states.  Plenty of objectionable societies are stable enough to persist, no matter how objectionable their morals are.

For the last self indulgent math metaphor of the year: imagine that you could represent the entire set of possible societies on a coordinate plane.  Obviously, you’d need more than two characteristics or dimensions to describe societies fully, but for the sake of simplicity, imagine you can.  You could assign a ‘morality score’ to each society with higher scores denoting more moral behavior and lower scores reserved for slave-holding, genocidal regimes.  If, for every society, you placed a dot at the height of its moral score directly over the point on the plane that represented that society, you would end up with a surface that might look something like this: 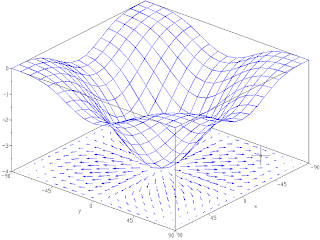 Some points would be higher than others.  The entire map might be a smooth surface, changing gradually as you tweaked the characteristics of the societies, or it might be full of jagged discontinuities.  Either way, some points would be local maxima – no point next to them would have a higher ‘morality rating.’  The graph might have only one maximum (the best of all possible worlds), or it might have dozens or hundreds.

The trouble is that it would be hard to try to distinguish a local maximum from the absolute maximum.  And certainly, from the point of evolutionary pressures, a local max would be a stable strategy.  Depending on the flexibility of the society and the range of possible mutations, a higher maximum might be out of reach, if evolution were left to work on its own.  The interim steps to reach the higher peaks are too unlikely and unstable.

If we want to move between peaks, we can’t rely on evolution.  It needs to be a human-directed and human-instigated process (possibly a transhumanist approach to morality?).  The two most basic steps we’d need to take would be to increase our sensitivity to moral differences between societies and expand our ability to imagine a broader range of societies (fiction can be particularly helpful here).  But none of this comes without effort.  Natural improvement of morality comes too slowly to be of use.

And that concludes the Eight Questions for Atheists, though I realize that I’ve spent this answer primarily on why evolution cannot be the cause of moral law, not on why I think moral law exists to begin with.  The first three chapters of Mere Christianity (which you can read online here) are still a decent summary of my position, and I anticipate I’ll spend a fair amount of 2011 on this question.  For now, I’ll just say that I’m as sure that moral law exists as I am that matter exists as a physical reality, even though I don’t know how to prove either of those propositions definitively.

January 1, 2011 What Atheists and Republican Strategists Have in Common
Recent Comments
98 Comments | Leave a Comment
"Jesus wasn’t resurrected as a great miracle simply in order to convince people to believe ..."
John The Two-Lazarus Problem
"The cartoon is amusing, but flawed. One of the four virtues of Stoicism is Justice; ..."
Vulpes Inculta 7QT: Stoicism Man, Semi-Imaginary Money, and ..."
"Do You Know what isn't Fair? Calling Atheism a Religion. Or saying Dawkins is a ..."
skwills Who Gets to Give the Courtier’s ..."
"Oh! And you can get there via Naval Gazing.(probably not by Navel Gazing...)"
TheSparksFlyUpward Too Sucky To Be True
Browse Our Archives
get the latest from
Catholic
Sign up for our newsletter
POPULAR AT PATHEOS Catholic
1 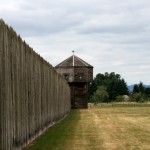