Many of the people who replied to my New Year’s Challenge to change my opinions about religion proposed books I should read.  Right up my alley, I thought, until I realized how very many books you all have read and enjoyed.  I’m going to pick out six or seven to start with and commit to reading one to two a month, so I don’t get overwhelmed, but that means I won’t get to a lot of these.

I’ve posted the full list here both as a reference for other atheists who might wonder what Christians want them to read, and so readers of this blog can make one last pitch for me to choose their favorite books from this list.  Feel free to link to reviews or talk about your own experience with the book.  As is, I’m choosing based on knowledge of the author, Amazon reviews/summaries, and some comments that were originally included when they were suggested (I’ve reposted them below).

Thanks again for all the suggestions.  I only wish I had the time for more.  Here’s the list: 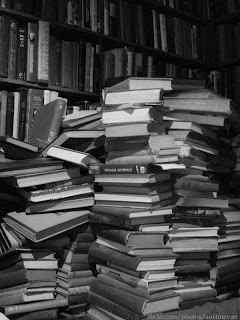 “A Grammar of Assent” and “On the Development of Doctrine” — John Henry Newman
Book of Mormon
Contingency, Irony, and Solidarity.– Richard Rorty
Catechism of the Catholic Church

The Catechism is a reference book, or at best a textbook; it’s not going to lay out the whole history of and argument for any given teaching or custom. But it will tell you in no uncertain terms what the Catholic Church teaches on almost any subject. It’s authoritative (so there’s no wondering “is this what they really believe?”), and it’s usually crystal clear. It’s also fairly well footnoted, so you can trace the history yourself if you want.

I strongly recommend Rex Warner’s very readable translation. You might also try “On Christian Doctrine.” If you get into him, you might try “On the Trinity” or “On the City of God,” though both of those are major commitments.
[I tried City of God freshman year in Directed Studies.  Not again, at least for a while.  –Leah]

I’d like to see you read / write about Wittgenstein (Philosophical Investigations) and Kierkegaard specifically, though a lot of 20th Century philosophy points in that direction (Zizek, Derrida, Foucault, Barthes, Adorno / Horkheimer, Nietzsche…)

I would start with the Stanford Encyclopedia of Philosophy online entry on Moral Relativism. From there, you might try the 1996 Gil Harman/Philippa Foot volume “Moral Relativism, Moral Objectivism”, and then perhaps Allan Gibbard’s 1992 book “Wise Choices, Apt Feelings”.

Salt of the Earth — interview with Pope Benedict XVI
Summa Theologica — Thomas Aquinas [Also read excerpts of this in DS, and I’m not aching to return — Leah]
The Agnostic Inquirer: Revelation from a Philosophical Perspective — Sandra Menssen and Thomas Sullivan
The Ball and the Cross — G. K. Chesterton

The Case for the Resurrection of Jesus — Gary R. Habermas
The Everlasting Man — G.K. Chesterton [I’ve read it, though I’ve not written about it here — Leah]
The Heart of the Matter — Graham Greene
The Power and the Glory — Graham Greene

January 18, 2011
Taking a Wrong Turn in the Moral Landscape
Next Post

January 20, 2011 Follow Up on Sam Harris
Recent Comments
118 Comments | Leave a Comment
"Despite the differences in level, it's still an excellent manga.pt.2632W.US/U5573xM"
Pilzkeks Dissecting the Catholic Vote for FiveThirtyEight
"Omg is that nathanlil Or whatever the ml name is?"
Parzivall I’m keynoting at a Con for ..."
"fynn is so cuttte（≧∇≦）"
Manmaker Lenten disciplines draw on our weakness, ..."
"What the bell inu x book all this time I was trying mina x goku ..."
MemeMan Books on deck for me for ..."
Browse Our Archives
Related posts from Unequally Yoked