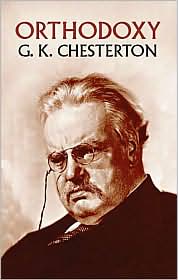 “This, therefore, is, in conclusion, my reason for accepting the religion and not merely the scattered and secular truths out of the religion. I do it because the thing has not merely told this truth or that truth, but has revealed itself as a truth-telling thing. All other philosophies say the things that plainly seem to be true; only this philosophy has again and again said the thing that does not seem to be true, but is true. Alone of all creeds it is convincing where it is not attractive”

G.K. Chesterton as quoted above in Orthodoxy and Eve Tushnet in the article I linked this weekend are going over some of the same ground. Chesterton was converted not by a single metaphysical proof, but by his conviction that Christianity was in accord with his most essential beliefs about the world, and that, when he and the Church diverged, he usually came around to the other side after investigation. The beliefs he was absolutely sure of pointed him towards the theology.  He did some metaphysical backsliding to bring his theology in line with his ethics and experience.

In some ways, I find myself in a similar position to Chesterton. I find that a lot of Christian theology works for me in a way that plenty of other philosophies have not. When I say ‘works’ I mean pretty much what Chesterton does—that it matches many of the core assumptions I make about the world, and it harmonizes some of the conflicting ones in ways I didn’t expect, but seem to fit. I find plenty of Christian vocabulary to be useful in ethical/philosophical arguments, to the point where my debate friends tend to roll their eyes or yell “Convert already!” when I reference “people’s essential brokenness/woundedness” in a justice debate or Kantianism as flawed because it places duty above love at a debate on ethics as a system of laws.

But I don’t believe. I’m not at all convinced that Christianity is the correct explanation of the world and laws I’ve observed. I’m still trying to find an atheist author for whom I feel as much kinship as I do for C.S. Lewis, but I don’t assume I’ll fail. After all, Christians have the advantage of numbers. Most philosophers I’ve read have been Christians, just as most Western writers since the establishment of Christianity have been Christian. With more authors to pick from, I’d expect that, for many philosophies, it would be easier to find a Christian proponent than an atheist champion.

And I am looking into the Christian tradition which most interests me, essentially cherry-picking. Plenty of the baggage added to Lewis’s mere Christianity in individual denominations is a lot less compelling and easier to contradict. If I think of the principles that I share with Chesterton and Lewis are universally accessible, it’s not surprising that a major religious tradition incorporates them.

The above explanations go far enough toward satisfying me, but most of the Christians I talk to disagree and think that my affinity for Christian doctrine should be enough to push me out of atheism. I’m curious whether any of the atheists who read this blog have sympathy for this view (but Christian comments are also welcome, as always).

Have you ever had a similar problem? Are there particularly Christian ideas that seem true? Would you ever change a metaphysical belief because you found an ethical system that seemed like an upgrade on your old model?

February 3, 2011 Chesterton Aftermath (Part 1)
Recent Comments
108 Comments | Leave a Comment
"Oh! And you can get there via Naval Gazing.(probably not by Navel Gazing...)"
TheSparksFlyUpward Too Sucky To Be True
"Hello, Deiseach!1. This is not an ad. (It always reassures me when someone says that!! ..."
TheSparksFlyUpward Too Sucky To Be True
""Do you honestly think that a child raised by a woman has no exposure to ..."
Zorin 2012 Queer Blogathon [Index Post]
"I'd love to see a video of how it works. keranique shampoo reviews"
Marlene Garza Welcome Camels with Hammers to Patheos!
Browse Our Archives
get the latest from
Catholic
Sign up for our newsletter
POPULAR AT PATHEOS Catholic
1