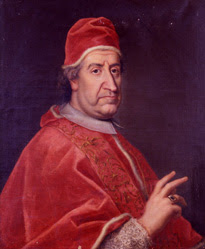 Why, you ask?  Simply put, he is responsible for my favorite application to date of overwhelming theocratic power.  You may remember, several weeks ago, I mentioned in a Quick Take that I was delighted that Rinderpest, a viral disease infecting cattle, had been wiped from the face of the earth.  It is only the second disease in history to be deliberately eradicated by humans (small pox was the first).

When I originally posted about the Rinderpest victory, I assumed it was irrelevant to the general topic of this blog, but, as is often the case, I shoehorned it in in a fit of epidemiological enthusiasm. But a piece in Tuesday’s Science section of The New York Times turned up a Catholic connection:

In 1713, when it threatened the papal herds, Pope Clement XI asked his personal physician, Dr. Giovanni Maria Lancisi, to stop it. Dr. Lancisi was familiar with the work of Dr. Bernardino Ramazzini, a scholar at the University of Padua who accurately deduced that rinderpest spread by the “virulently poisoned breath of an ox” and its excretions and hide — not by fogs, astrology or other popular theories.

According to Dr. Scott, Dr. Lancisi prescribed quarantine measures that were nearly as brutal to humans as to cattle.

Charlatan “cures” were banned; priests were ordered to stop relying on prayer alone and to preach from the pulpit that all herds with any sick members were to be slaughtered and buried in lime, while healthy herds were to be kept isolated. Any layman who resisted or cheated was to be hanged, drawn and quartered. Any disobeying priest was to be sent to the galleys for life.

Within nine months, the outbreak in the Papal States was snuffed. In the rest of Europe — where Protestants disdained papal orders — it persisted for a century and killed 200 million cattle.

It’s easy to forget how urgent and violent disease containment is when you live in the well-vaccinated Western world.  During the smallpox eradication campaign, people in containment zones were not always politely lining up to be vaccinated.  WHO doctors brought the full pressure of whatever local authority existed to bear, and many of the vaccinations might fall under the bioethically proscribed category of coercion. (As always, check out Richard Preston’s The Demon in the Freezer for details.)

People who complain about coercion and government pressure in favor of vaccination usually seem to have forgotten the world we won an escape from.  We’re lucky that we haven’t been faced with the kinds of outbreaks that would require this response world wide.  We’re also lucky that science and health education primes most people to cooperate with public health officials and campaigns.  But every time science budgets are slashed or doctors keep the details vague, we get closer to a world where every epidemic requires the merciless commitment of Clement XI.

(P.S. Before I praised Pope Clement XI, I had to do a quick wikipedia check to make sure he wasn’t involved in the infamous Cadaver Synod, but, luckily, he’s got a clean record!)

June 29, 2011
Put Your Money Where Your Marriage Is
Next Post

July 1, 2011 7 Quick Takes (7/1/11)
Recent Comments
5 Comments | Leave a Comment
Browse Our Archives
get the latest from
Catholic
Sign up for our newsletter
POPULAR AT PATHEOS Catholic
1