Serve a Paper and Sue Me 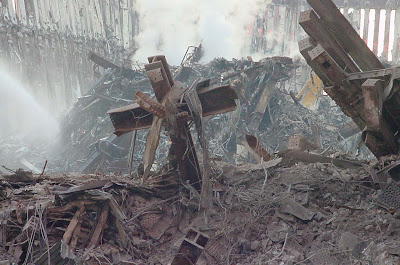 I wasn’t planning to post about the the suit American Atheists has filed to prevent a cross-shaped piece of the World Trade Center from being displayed at the eventual memorial.  After reading a host of conflicting articles and commentaries, I still don’t think I have a good enough grasp of the facts of the case (or the law) to guess where the merits of the case lie.

And (I’ll admit it) I was mostly keeping quiet in an effort not to prolong the story’s coverage in the news cycle.  Whether or not the American Atheists had the right of it, I had trouble believing this was really the suit most deserving of their time and money.  Surely, even if the law was technically being broken, we could come back and mop up after we dealt with the several states that ban atheists from holding public office or testifying in court.

But a friend called me out in a facebook post and asked where I stood, so I could duck the question no longer.  I basically said the above, and added that I was pretty disturbed by the the long list of death threats to atheists that appeared in the comments of the Fox story.  Here’s a sampling: 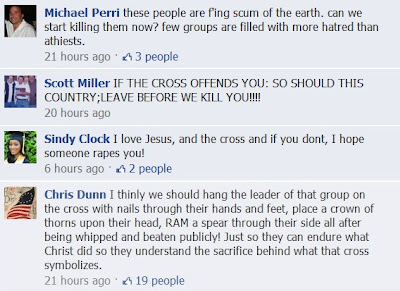 Part of my privilege as a city-dweller is that I can read those posts and not feel any particular sense of danger.  Others aren’t so lucky.  When I added this link to the discussion, a Christian friend responded:

First, none of that hate represents actual Christian feeling or teaching. It is reprehensible, and no Christian with any sense would condone it. Second, although I acknowledge that those comments are hateful, none of them would have been spurred on without the idiotic remarks of that militant Atheist. Finally, animosity cuts both ways — I’m sure you heard some of the riot-worthy remarks from Atheists on Gov. Perry’s totally justified prayer rally in Texas.

My hackles went up.  Even though I found the suit to be, at the very least, a criminally stupid PR move, the death threats were an horrifyingly disproportionate response.  Imagine there were no merit in the case, but the atheists prevailed.  Can anyone really argue that the harm done by not placing an emotionally resonant pair of girders in a memorial was so great that it could only be avenged by bloodshed?  Frustrations or eye-rolling seems like the strongest possible emotion it should be possible to muster in response.

I still suspect the American Atheists of taking the suit primarily for the purpose of acting as agent provacateur — I assume the violent threats will be used as a fundraising ploy — but now I’m primarily aggrieved by the way they’ve handled the case rhetorically, not with the decision to file in the first place.

Holding the line on laws related to religious freedom and state endorsement means taking on cases that are tasteless and offensive (cf the ACLU defense of the Skokie neo-Nazis).  It also means taking on cases that are ambiguous or just don’t look slam-dunk winnable.  Trying to enforce the law only when it is most egregiously and flagrantly broken erodes its statutory authority.  There’s little harm in letting the case go to court and be decided on its merits.

I’m now imagining the American Atheists in the role of a slightly seedy, more than a little personally unpleasant defence lawyer.  I may not like their oily tactics, and I won’t hesitate to say so, but, on net, I’m glad they’re balancing out the legal landscape.

Unrelated, but, while I was working on a post title and looking at the lyrics of “Sue Me” from Guys and Dolls, I was terribly disappointed by the number of lyrics websites that transcribed “All right already it’s true, so nu” as “so new.” What a shanda.