The Merits of the WTC Cross Suit 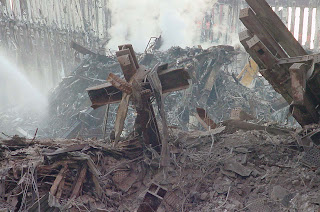 My last post about American Atheists’s lawsuit over the World Trade Center cross has bifurcated in the comments section.  I want to take this post to split of the questions about the legal merits of the case from the question of whether it is wrong for the American Atheists to bring the suit, even if they think the law has been broken.  So, a quick disclaimer: this kind of law (and most kinds of law) are not my area of expertise, I’m mostly asking questions below.  Answers welcome.  (Answers with hyperlinks to sources backing you up, even more welcome!)

So, as far as I can tell, the American Atheists are arguing that it is unconstitutional for the WTC cross to be displayed in the memorial.  For it to be licitly displayed, in their opinion, the memorial would be required to also display symbols of other religions and no religion at all.  So that leads me with some questions.

First of all, I understand the constitutional question arises from the fact that this memorial is being erected and maintained by the government but it is certainly the case that the government can exhibit religious artifacts. To the best of my knowledge, the Smithsonian can mount shows that focus on only one religious tradition. (And just a moment of googling reveals that it does).

So why would this kind of exhibit be kosher? Is there an expectation that the religious works are sanitized by being placed in an art museum? After all, when I visited the Hillwood Estate with Tristyn of Eschatological Psychosis, I didn’t see any of the visitors (including my two Orthodox companions) venerating the icons in the exhibit. Because religious art can be practically deracinated by a museum setting, some religious thinkers have called upon churches to reclaim art from exhibits.

But even if this is the rationale, the standard seems too fuzzy to be useful. Does it only matter if the government intends for the included pieces to become a focus for worship and pilgrimage? How many acts of unexpected veneration would it take to tip the balance to unconstitutional? Is the problem that the cross under review has been recently blessed, but the consecrations of other exhibits have gone through some kind of diminution by half-life?

To keep the cross on display, the American Atheists claim the memorial would need to also exhibit an atheists/humanist memorial of equal size. To my knowledge, they have not called for any other non-Christian religion to be included. That choice promotes the weird (sort of American) idea that religion is a binary between Christians and atheists. Do the American Atheists think other groups should be included, but expect them to do their own legwork? Is the revised exhibit supposed to be a portrait of the faiths of all American (in which case the memorial would be overwhelmed by tchotchkes) or just reflective of the beliefs of the victims (has anyone done a census of the dead? In NYC, it’s decent odds the Baha’i or Zoroastrians might merit inclusion).

Not to mention the biggest question: What would a humanist artifact look like?

I stick by what I said in the first post: I think it’s reasonable and appropriate for American Atheists to file suit as long as they think the inclusion of the cross is clearly or even ambiguously unconstitutional. The courts exist for the purpose of deciding and clarifying these questions. My blog exists for speculation. I don’t understand how the American Atheists could prevail in their suit, but I’d appreciate your opinions and clarifications.

August 18, 2011 Checking my biases
Recent Comments
13 Comments | Leave a Comment
"Oh! And you can get there via Naval Gazing.(probably not by Navel Gazing...)"
TheSparksFlyUpward Too Sucky To Be True
"Hello, Deiseach!1. This is not an ad. (It always reassures me when someone says that!! ..."
TheSparksFlyUpward Too Sucky To Be True
""Do you honestly think that a child raised by a woman has no exposure to ..."
Zorin 2012 Queer Blogathon [Index Post]
"I'd love to see a video of how it works. keranique shampoo reviews"
Marlene Garza Welcome Camels with Hammers to Patheos!
Browse Our Archives
Follow Us!