“Overcome Our Sinful Calmness, Rouse Us With Redemptive Shame”

In the wake of the Kony 2012 video by Invisible Children, a friend of mine linked to a brilliant piece from GiveWell (a nonprofit that evaluates charities to tell you where your money will make the biggest difference).  In a post titled “The Biggest Killer of Invisible Children is Not Joseph Kony” they wrote:

Joseph Kony has committed atrocities that make me furious. But malaria makes me angrier. Why? Because malaria deaths really do happen just because Americans don’t care enough.

But we can stop a lot of malaria if we can just care about it more. Insecticide-treated nets drastically reduce malaria; they’ve been tested time and again; they’ve worked on a small scale and on a large scale; …[t]he same can likely be said for some other malaria control interventions. The missing ingredient in malaria control? More money – it’s that simple. And you don’t have to lobby Washington to make that happen (though you can); you can also just write a check or get your friends to do so.

My friend, who shared the link, decided to use the emotional hook and ubiquity of the Kony 2012 video to remind him to donate to a GiveWell-vetted charity focusing on neglected tropical disease, and I’ve followed suit.

A lot of the time, the charity pitches I encounter aren’t the charities where my money will do the most good.  I would rather give to an organization working with the homeless than an individual person, but it’s a lot harder to remember to follow up after I walk by the individual.  So I’m going to try something new to make sure I harness the charity prompts I encounter. 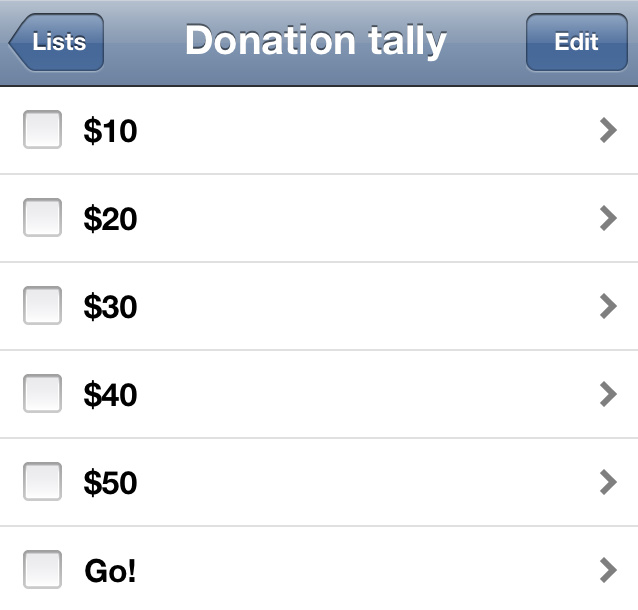 I’ve used Listary (a list making app for my phone) to make a countdown to $50 donations.  So every time I run into a charity ask I don’t think would be the best use of my money, I’ll check off one of these boxes, and, when I get to ‘Go!’, I’ll make a donation to GiveWell’s recommended malaria foundation.

I’ll probably have to do some fine-tuning, once I see what I can afford and how frequently I run into donation ‘pings,’ so I’ll let you know in a couple months how well this guilt-powered-hack performs.  What strategies do you guys use? 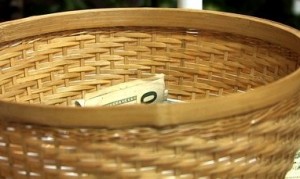 The title of this post comes from one of my favorite hymns I’ve encountered at Mass: “God, Whose Purpose is to Kindle”  It’s set to the tune of “Ode to Joy,” and I’ve excerpted lyrics below.

Thou, who still a sword delivers
rather than a placid peace:
with thy sharpened Word disturb us,
from complacency release!
Save us now from satisfaction
when we privately are free,
yet are undisturbed in spirit
by our neighbor’s misery.

March 12, 2012 I find your definitions of faith disturbing...
Recent Comments
84 Comments | Leave a Comment
"On that note... I recommend every Catholic and Christian have that post a read. Click ..."
Oktavian Zamoyski Effective Altruism and Caritas [Radio Readings]
"I think too many people have grandiose and unnatural ideas about charity. It becomes a ..."
Oktavian Zamoyski Effective Altruism and Caritas [Radio Readings]
"Jesus wasn’t resurrected as a great miracle simply in order to convince people to believe ..."
John The Two-Lazarus Problem
"The cartoon is amusing, but flawed. One of the four virtues of Stoicism is Justice; ..."
Vulpes Inculta 7QT: Stoicism Man, Semi-Imaginary Money, and ..."
Browse Our Archives
Related posts from Unequally Yoked