Well, you asked for me to blockquote things I agreed with…

People who commented on this post last week might want to be careful what they wish for.   I’m going to keep an eye out for blogposts where I can highlight a pull-quote and have something positive to add, but I figured I could practice by blogging through a book that I agree with quite a bit.  (I already enjoyed doing this with Granny Weatherwax from Discworld).

So here comes a series of posts (probably one a week) on a book that made me feel just as this quote from The History Boys puts it:

The best moments in reading are when you come across something — a thought, a feeling, a way of looking at things — that you’d thought special, particular to you. And here it is, set down by someone else, a person you’ve never met, maybe even someone long dead. And it’s as if a hand has come out and taken yours.

And the book is… 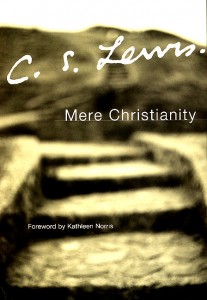 When I first read Mere Christianity, I was startled by the range of topics where Lewis seemed to capture what I was thinking about moral philosophy, except way more elegantly.  I reread the book over the Triduum, and dog-eared pages, so now we can have a solid thrashing out of what’s wrong with my atheism.  (And my college friends can perhaps expand on the “Convert already!” they used to yell at me on the debate floor).

April 10, 2012 A meal plus an extended argument? Seders are the best!
Recent Comments
108 Comments | Leave a Comment
"I'd love to see a video of how it works. keranique shampoo reviews"
Marlene Garza Welcome Camels with Hammers to Patheos!
"Logismoi (the plural of logismos) are a fairly simple concept; they are whispers from either ..."
Rob, Portland Logismoi, Vampires, and Other Intrusive Thoughts
"I imagine I’ll do a lot more reading and pick a lot more fights over ..."
Donalbain A little about the queer stuff
"You are part of a search and rescue for lost Catholics.Regular updates to the countdown ..."
Edward Palamar I’m keynoting at a Con for ..."
Browse Our Archives
Follow Us!