What are we going to do about homosocial friendship?

Last night was the season finale of Sherlock (which I hope you were all watching), and, in one sequence, Sherlock and Watson end up handcuffed together.  As they clasp hands and start running, Watson shakes his head and mutters, “We’re never going to hear the end of this.”  Watson’s frustration that everyone assumes he and Sherlock are, ahem, involved is shared by Maureen Ryan, who wrote at HuffPo that the “not-that-we’re-gay” joke that follows around male-partners-in-crime (or crime solving) is extremely played out.

Now that kind of joke — “We’re close friends, but we’re not gay!” — feels like a distancing technique, something that draws attention to gays and lesbians as something out of the norm. That feels wrong for a lot of reasons.

And honestly, who cares? In this day and age, are you telling me that two men who are best friends would constantly have to deal with the assumption that they’re gay? I just find the whole idea fairly preposterous. Who doesn’t know straight men who hang out all the time without anyone thinking about or guessing about their sexuality? How is drawing attention to not-gayness, at this point, anything but a representation of lingering shreds of mild but unmistakable gay panic?

I agreed with her complaint, and also agreed with s.e. smith who guest posted at Alyssa Rosenberg’s blog and singled Sherlock out for praise precisely because Sherlock and Watson are involved without being sexually attracted to each other.  We have a tendency to sell friendship short — treating them as a pale substitute for real relationships which necessarily include some naked time.  That’s why, in our debate about gay marriage, Matt was worried that opening up the possibility of male-male sexual relationships would mean devaluing male-male platonic relationships. 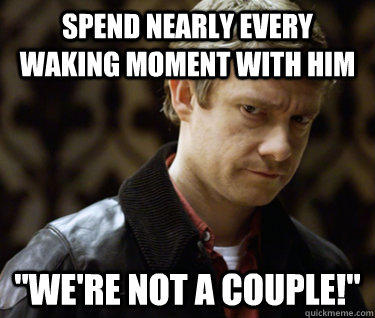 I kind of read the Sherlock coverage, mentally filed it for future arguments, and moved on.  Then, this past weekend, I was reading the NYT Book Review, and paused over the write-up of Code Name Verity.  The story is about a WWII spy and the female pilot she works with.  The review included the following paragraphs:

“It’s like being in love, discovering your best friend,” Queenie writes, and Wein conveys that love gorgeously. “We’re still alive and we make a sensational team,” Queenie says.

And they do. This is a rare young adult novel entirely about female power and female friendship, with only the faintest whiff of cute-boy romance. I’d tell you more about the “Usual Suspects”-meets-“If on a Winter’s Night a Traveler” plot, but then I’d have to kill you.

And I immediately assumed that the book was YA lesbian romance.  Whoops.

During our debate, I outlined how I try to avoid tripping up platonic friendships with sexual tension in my day to day life (after all, I’m bi, and people of either gender might not know how to parse my friendship).  But I haven’t thought much about how to change my expectations of or reactions to other people’s friendships.

My usual solution is to hope that the build up to romantic entanglements becomes a lot more formalized and scripted, but I realize that most people don’t like this model as much as I do.  How do you guys negotiate the blurry line between friendship and romance, whatever the gender pairing?  Do you try to sharpen the distinction or just cultivate a kind of agnosticism about the status of relationships?

The way we handle these distinctions is very much in flux, and sometimes it feels like the only people really working on delineating categories are the “Relationship status” programmers at Facebook.

May 21, 2012
Welcome No Longer Quivering to Patheos!
Next Post