I got to see Restless Heart, the new Augustine biopic last night.  It’s not yet in theatres, but community groups can do special showings, and I was lucky enough to snag tickets to the one sponsored by St Anthony of Padua Church here in DC.  (You can put in a request to host a showing or see the list of upcoming events here).  Here’s the trailer:

The trailer is super dramatic, but large parts of the movie are just people in period clothes standing around talking to each other… which is just the way I like it.  Be warned, there’s a really bad CGI shot of birds right at the beginning, which made me nervous about the quality of the film, but that turned out to be an abberation; on the whole, it’s well put together.

What most surprised me about the film was how unsurprising Augustine’s eventual conversion felt.   I’m not sure whether or not I was pleased about that choice.  When Augustine is ascendant, as court orator, he was hesitant.  Perhaps this was meant to be the canny hanging-back of a mouth for hire, but it certainly came across as a yearning, only too aware that he was eating what was not bread, spending his labor on what failed to satisfy.  I think this will end up making it more attractive to Catholics, but less useful as outreach.

Throughout the movie, I wanted the struggle over Augustine’s soul to look a little less one-sided.  It’s not surprising that Ambrose is Augustine’s strongest opponent, but I would have liked to see the other philosophies Augustine explored given similarly poignant and eloquent defenders.  The audience snickered through the scene where Augustine was being pitched on Manichaeism, and no wonder, since it was quickly glossed as “No one is responsible for their actions, since our nature is imprisoned in matter, which is evil, but if we follow Mani, we will become pure light or spirit.”  It sounded New Agish, and Augustine looked uncertain when we saw him in their midst.

But Manichaeism is tempting.  (Not just to me, I swear!).  It has echoes in the modern worship of the intellect and the abstract.  Augustine was drawn to Manichaeism because he was seeking truth, and they seemed plausible at the time.  I would have liked to see more of his upward striving toward knowledge and disappointment when he realized he was on the wrong path.  In the film, he seemed to be primarily choosing between Catholicism and nihilism.  The starkness of that choice makes more sense when you can see that Augustine has been stumbling on his pursuit of Truth and might have reason to wonder whether his mistake was in his choice of path or in believing there was a path at all. 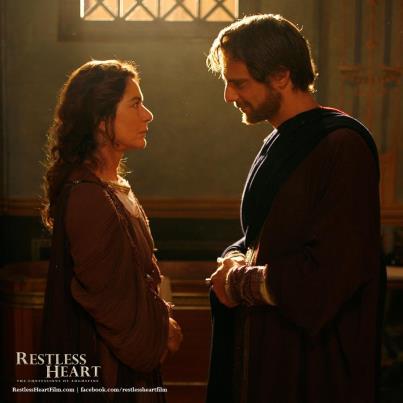 As it is, the nihilism he’s offered is pretty boring nihilism.  The Roman court is petty and cruel, and Augustine never seems drawn in.  The Empress mother comes off as villainous from her first appearance, so it feels like Augustine sacrifices very little when he throws away his political life in his conversion.  I’d prefer the malignancy of his life at court to be less obvious or for the audience to feel more implicated in its ugliness.

His tutor in rhetoric is a more successful devil.  The orator asks him if he is strong enough to live without the truth, and he’s not just offering simple hedonism as the prize.  Augustine looks the most alive when he is speaking as a lawyer.  He wields rhetoric the way an painter uses a brush and tempts us to think the results of both are value neutral.  Isn’t technical genius its own licence?  You get a real sense of Augustine joy in creation, and that true joy animating unworthy ends is what makes this temptation harder to brush aside and the eventual victory more exhilarating.  A philosophy looks strongest when you let it loose on non-strawmen.

P.S. A couple times I wondered about the accuracy or timing of a few incidents (since biopics usually telescope events), but I’m forgoing Wikipedia and rereading the Confessions, instead.  This was, as best I can recall, the first Christian work I read post-conversion, and I’m looking forward to returning to it now that some time has passed and I’ve entered the catechumenate.

August 29, 2012
The Virtue of an Almost Right Solution
Next Post

August 30, 2012 Sondheim Symposium [Sequence Index]
Recent Comments
91 Comments | Leave a Comment
"Do You Know what isn't Fair? Calling Atheism a Religion. Or saying Dawkins is a ..."
skwills Who Gets to Give the Courtier’s ..."
"Oh! And you can get there via Naval Gazing.(probably not by Navel Gazing...)"
TheSparksFlyUpward Too Sucky To Be True
"Hello, Deiseach!1. This is not an ad. (It always reassures me when someone says that!! ..."
TheSparksFlyUpward Too Sucky To Be True
""Do you honestly think that a child raised by a woman has no exposure to ..."
Zorin 2012 Queer Blogathon [Index Post]
Browse Our Archives
get the latest from
Catholic
Sign up for our newsletter
POPULAR AT PATHEOS Catholic
1

114: Why Not Anglican, Why Not Orthodox, Why...
In this episode of The Cordial Catholic, I'm joined by Michael Lofton...
view all Catholic blogs
What Are Your Thoughts?leave a comment
Copyright 2008-2021, Patheos. All rights reserved.