“What do you wanna [stay single] for?”

I’m delighted to say that Christian H of The Thinking Grounds has sent in a guest post for the Sondheim Symposium.  Christian H is an English Lit grad student in Canada, and his blog is one of the reasons you should use RSS readers: it updates irregularly, but is always interesting.  Take it away, Christian!

Sondheim’s musical Company might strike many as being strangely silent on the subject of what marriage is, and what it is for, considering that it is a musical about marriage. Or, rather, it is a musical about a man who does not quite know his own feelings about the subject, and I think that goes a long way to explaining why the plays gives no telos for marriage. The focus is on why people do not get married more than on why they do. For being so thoroughly confused on the subject, Bobby eventually reveals his motivations, and that is what I want to look at.

“I am not resisting marriage,” Bobby insists, and to prove it, he lists three different women he has been seeing. But being in romantic relationships does not seem to be his problem. Marriage is his problem, and it is precisely his proof that he is not resisting marriage that prompts suspicions that he is. After all, the play’s New York does not seem any more polygamy-friendly than contemporary North American society, and listing three people seems a step away from marriage because now he’s got that pesky selection problem. How does marriage differ from romantic-sexual relationships? Why does Bobby not want to get married?

Fortunately for us, Bobby becomes eloquent on his reasons for avoiding marriage in the Finale:

“Afraid of intimacy” has become a cliché, so I want to note that this is not the same as being hurt in an intimate relationship. Amy says of her ex-fiancé’s projected uxoriousness, “No one could ever stand that everlasting affection!” There are boundary issues involved here (paging Dr. Beck), but there are also concerns about dependency: unconditional love is a lot to live up to, and that amount of intimacy can make a person uncomfortable. I’ll come back to why in a moment. 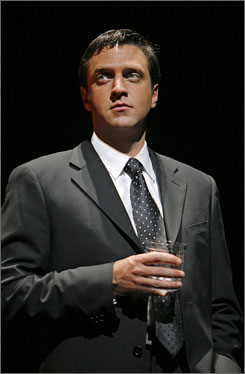 Bobby is also afraid of getting hurt, and this is such an obvious point that I will not spend much more time on it except to emphasize that my brevity on this matter at the moment does not represent the topic’s importance: indeed, this kind of fear is central to how I think Company represents marriage. The next fear is more interesting: “Someone to sit in your chair.” Bobby does not want to give up his seat to another, but holding possessions in common is a (often and notoriously legally circumscribed) fact of marriage: “Someone who, like it or not, / Will want you to share […].” (I am aware that this could also be understood to mean that they expect him to share his feelings. I’m taking it as polysemous—both readings are simultaneously true.) But giving up his seat also means, I would suggest, giving up his identity, giving up his place in his own life (cf Leah’s post on the matter). As he says in “Marry Me a Little,” “We won’t have to give up a thing, / We’ll stay who we are.” Concern over possessions (concrete and metaphorical) and concern over identity sit side by side. Compared to these three, ruined sleep seems minor, but I will point out that bodily needs are also jeopardized by marriage, in part because physical hurt is sometimes a consequence of emotional hurt. Anyone whose relationship with sleep is fraught will know that losing shut-eye can be physically and psychically devastating.

Bobby is afraid of marriage, then, for a few related reasons: 1. he does not want to be depended upon; 2. he does not want to be emotionally vulnerable to—that is, dependent on—another; 3. he does not want to give up what he has or, more pointedly, who he is; 4. he does not want to entertain threats to his bodily needs. Bobby is afraid of the vulnerability of marriage and its very numerous dynamics of dependency (including an identity that is dependent). In fact, I think Bobby, as with most of us, is afraid of vulnerability and dependency themselves; he is uncomfortable with other people’s dependencies, I suggest, because he is uncomfortable with the very idea that one might choose to be dependent on another. What makes Bobby’s reasons so nonsensical is that he is already subject to all of those conditions. He may try to mitigate those emotional dependencies by spreading them across multiple women, but that does not change the fact that those dependencies exist. Marriage is only one, albeit intensified, version of pre-existent dependencies. We might want to read “being alive”—the reason for marriage given in the finale—as a synonym for “accepting risk,” but I would suggest that “accepting dependency and vulnerability” would be a better replacement given the preceding lyrics.

Both lyrically and dramaturgically, the play represents “being alive” as making a wish while blowing out birthday candles, and the focus of this in one of Bobby’s friends’ final exhortations to him: “Blow out the candles! Make a wish. Want something” (emphasis, I think I can say, is Sondheim’s). Wanting is a form of vulnerability, because wanting opens the possibility of disappointment, and it is a form of dependency when what you want involves another. Indeed, being open to another’s wants is part of marriage (remember that a wife would expect Bobby to share), and produces new vulnerabilities. But the Socratic inversion—”the unlived life is not worth examining”—introduces the concept of worth to the play, and it seems clear that Bobby has very little that he consciously values. He does not want anything, and so nothing is worth anything. (Except that he seems to want company, which is where friendship comes in, at least as far as this play’s logic is concerned. So there is a bit of a difference between friendship and marriage in the play after all.) His friends, for all of their many faults, at least seem to value particular facets of marriage, and are thus willing to expose themselves. (Though, of course, they are always exposed anyway.) Or, more accurately I believe, they are willing to acknowledge that they want things, that wanting is a kind of vulnerability, and that acting on that want produces more vulnerability.

Part of the reason wanting—and acknowledging our wants—makes us vulnerable is that what we want lies outside of our own control to a large extent. So when Bobby sings to his future wife, “Want me more than others, / Not exclusively,” he might be stating what seems to him to be a preference, but in fact he reveals something unusually honest, something not acknowledged in conventional romcom wisdom. Recognizing that many people—probably most people, probably your partner, probably you—have plural objects of romantic and sexual desire is an important component of any relationship, and marriage does not suddenly negate that plurality. What you do with that recognition is equally important, of course. I recommend the “sharing” that seems so scary, but lots of folks recommend keeping it secret; in “Little Things You Do Together,” the lyrics suggest that a couple could “date [a third party] together,” and though Bobby looked shocked, I can see how it might work for some people. Whatever the best solution, the fact remains that our wants, and our partner’s wants, and our friends’ wants, and our unrequited-admirers’ wants, are not entirely subject to conscious control. Maybe this is the part of vulnerability or dependency that is scariest, but it is hugely important, and it is on this issue only that I imagine the character Marta and I might agree.

What Company does not spend much time doing is making clear how marriage differs from other ways of relating (parent-child; Watson-Holmes; Antimony-Katerina; sibling-sibling). One of the things about the play that might strike some people as strange is the possibility—that remains satiric but also open—that one might get married for any number of idiosyncratic reasons (“Company. I don’t know. The same as everyone else.” Or, “Somebody with a smile at the door,” and the other reasons, predicting qualities one should look for in a potential spouse, in “Have I Got a Girl for You”). While this might put off some of the Catholics in the crowd, or those invested in the idea of a telos, I am not especially worried about that: there are probably many very good reasons for getting married, as well as many very bad ones, and acknowledging that more than one exists is not the same thing as saying that any old reason will do. Working that out, however, is not Company’s project; Company’s project seems to me to be working out why a person would not want to get married, and why those reasons do not work. In this sense, marriage is like everything else, just more so, and for reasons the play does make clear, that is precisely why Bobby should get married.

August 23, 2012 Here there be Dragons [Reply to JT]
Recent Comments
115 Comments | Leave a Comment
Browse Our Archives
Follow Us!