Javert and Valjean at Prayer

The two things I found most frustrating about the Les Mis movie were the camerawork and Russell Crowe’s performance as Javert.  And they both came together to annoy me during “Stars.”  Crowe is sad-eyed instead of steely from his first appearance and, for this number, director Tom Hooper places him on a ledge.  This seems to be done simply so that Hooper can set up some parallelism in his cimematography; the shots of Javert walking right along the edge of the roof in “Stars” are echoed when he paces the bridge in “Soliloquy (Javert’s Suicide).”

But these two scenes don’t correspond in this way.  Javert has no suicidal ideation; he is pure certainty.  Frankly, even the pacing, on or off a roof, makes no sense.  Javert is complete and stable in himself.  It’s very fashionable to show villians as sympathetic by revealing their weakness and doubt, but it might be a more accurate (and a better warning!) to show that uncharity can feel like joyful strength.  In Hugo’s novel, he describes Javert as follows.

He, Javert personified justice, light, and truth, in their celestial function as destroyers of evil. He was surrounded and supported by infinite depths of authority, reason, precedent, legal conscience, the vengeance of the law, all the stars in the firmament; he protected order, he hurled forth the thunder of the law, he avenged society, he lent aid to the absolute; he stood erect in a halo of glory; there was in his victory a reminder of defiance and of combat; standing haughty resplendent he displayed in full glory the superhuman beastliness of a ferocious archangel; the fearful shadow of the deed which he was accomplishing, making visible in his clenched fist the uncertain flashes of the social sword; happy and indignant, he had set his heel on crime, vice, rebellion, perdition, and hell, he was radiant, exterminating, smiling; there was an incontestable grandeur in this monstrous St. Michael.

Javert is a grotesque echo of something beautiful and truly desirable   He lives in the moral uncanny valley.  Crowe’s best moment as Javert comes after he is discovered by the revolutionaries, who plan to put him to death. He barks out, “Shoot me now or shoot me later / Every schoolboy to his sport / Death to each and every traitor / I renounce your people’s court!”  His defiance is tinged with contempt, but here Crowe musters a joy akin to the Trappist martyrs in Of Gods and Men.  He is free because he answers to something higher than other men and is conserving something beside his own life.

The film could have done more to heighten Javert’s jarring not-quite-virtue if “Stars” had been set up to parallel “What Have I Done” instead of the suicide.  Valjean sings “What Have I Done” in a moment of profound doubt, as he decides whether he can accept the forgiveness of the bishop he has robbed.  Let’s listen to it again:

The staging of this number also frustrated me, since it was really ham-handed.  In Hooper’s production, Valjean sings this number while in a side chapel of the bishop’s church.  It also involves a lot of pacing with too-literal blocking.  During the parts of the song where Valjean wants to yield to grace, he walks toward the chapel; when he doubts, he walks away.

But, since both “What Have I Done” and “Stars” are offered up as prayers, imagine if they were both set in church, so we could contrast the Catholicism of both characters.  Here, Valjean is working out his salvation with fear and trembling, just on the cusp of succumbing, while Javert is a rock of stability.  Valjean is pursued by furies, while Javert is full of peace and joy. 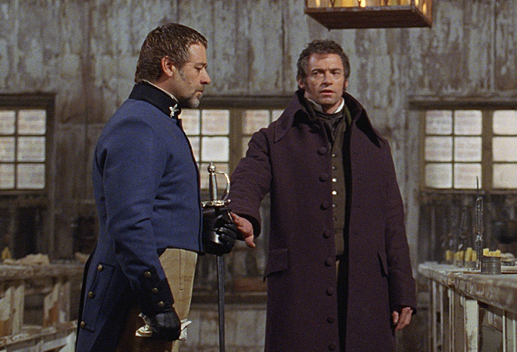 Until we rest in Heaven, something about the Imago Dei will chafe us.  That discomfort is data; we can turn in towards the flinches to find what to mend.  Javert’s warning is in his peace.  He must pray to a very small god, if that god is satisfied with Javert-as-he-is, and only requires him to hold the line.  Valjean’s conversion begins with his own weakness; when he wonders how he can know that he has a soul, he has his answer in the lyric “I feel my shame inside me like a knife.”

Valjean’s virtue is in choosing to throw himself into the pain, so he can emerge on the other side of the crucible as a new creation.  Valjean’s persistence is the result of the same confidence and joy that Javert has in defying Enjolras and the students.  But Valjean has cast himself into battle against a subtler and more powerful enemy; Enjolras threatens to take Javert’s life, but only Valjean himself can threaten his own soul.  His worship and his defense is constant transformation and dying to self.

To watch both men at prayer is to see the danger of absolute faith and love given to anything lower than God.  Javert’s certainty is the proof of his idolatry, while Valjean suffers because he is growing into something larger than himself. 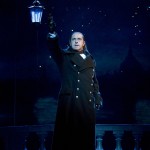 December 29, 2012 The Inspector Javert Medley [Sequence Index]
Recent Comments
110 Comments | Leave a Comment
Browse Our Archives
get the latest from
Catholic
Sign up for our newsletter
POPULAR AT PATHEOS Catholic
1