I’m never one to pass up a chance to leverage people’s interest in a hot-button social issue to talk about probability theory.  I’m over at Ethika Politika today, talking about how base-rate neglect can skew people’s understanding of the significance of screening test (specifically, those for fetal abnormalities)

Abortion, the talking point goes, is a private matter between a woman and her doctor.  But, after a series of missteps by companies offering early genetic screening, pro-choicers might want to append “… and a mathematician” to that phrase.

Usually, when advertisers tout a statistic of 99 percent accuracy, they’re talking about a true positive rate.  That is: If you do have a genetic abnormality, the test will say that you do 99 percent of the time.

The trouble is, although a high true positive rate is nice, it’s not sufficient to make a test useful.  At the extremes, I could run a very shady fetal screening company that had a 100 percent true positive (“accuracy”) rate, if I wasn’t above a bit of flim-flam.

All I’d have to do is take a blood sample from each woman who came to my clinic, wait a few days after her appointment, and then gravely call her to say that the results had come back positive—without ever having screened her blood at all!  I’d be guaranteed to have a 100 percent true positive rate, because I would just tell every woman that her fetus was abnormal, meaning that I’d end up telling the truth to every woman whose pregnancy was actually unusual.

That would be cold comfort to all the women with run-of-the-mill pregnancies whom I’d misled.

And, if you’re looking for MLK-blogging, today, check out my radio show this week, which is focused on Martin Luther King Jr’s martyrion (witness) and the Christological significance of the way he made the invisible violence of his communities visible, by offering his own body as place it would be recorded. 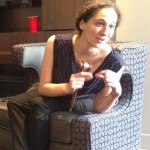 January 20, 2015 Holy Fools Against the Mini-Maxers
Recent Comments
0 | Leave a Comment
"On that note... I recommend every Catholic and Christian have that post a read. Click ..."
Oktavian Zamoyski Effective Altruism and Caritas [Radio Readings]
"I think too many people have grandiose and unnatural ideas about charity. It becomes a ..."
Oktavian Zamoyski Effective Altruism and Caritas [Radio Readings]
"Jesus wasn’t resurrected as a great miracle simply in order to convince people to believe ..."
John The Two-Lazarus Problem
"The cartoon is amusing, but flawed. One of the four virtues of Stoicism is Justice; ..."
Vulpes Inculta 7QT: Stoicism Man, Semi-Imaginary Money, and ..."
Browse Our Archives
Related posts from Unequally Yoked